What Chris Rock Got Wrong About the Oscars Diversity Debate

The Academy Awards ceremony on Sunday night was, at least according to host Chris Rock’s opening monologue, the “wildest, craziest Oscars to ever host” because of the controversy that has surrounded the lack of diversity among year’s the nominations. What, Rock asked, made this year so special, that a not-so-unusual situation finally garnered serious attention? One possibility, Rock suggested, was that past years kept potential protesters busy with “real things to protest.”

Another person asking that question was Edward Mapp, author of African Americans and the Oscar: Decades of Struggle and Achievement and professor emeritus at Borough of Manhattan Community College. His answers, however, were different.

As Mapp describes in his book—a fact also highlighted during the Oscars by writer Gene Demby—the height of the civil-rights movement was not in fact a time of passivity in Hollywood. In 1962, a group called the Hollywood Race Relations Bureau picketed the awards for similar reasons to the ones expressed by activists this year, and in the mid-1990s Jesse Jackson led another round of protests. Furthermore, Mapp says, the idea that one kind of protest precludes another one is not borne out by history. Rather, different social movements can reinforce one another—and it’s not as if there are no non-Hollywood problems in the world right now for activists to worry about. “The world multitasks,” as he puts it. (But he doesn’t fault Rock the joke, he’s quick to point out, as the host had humor to think of as well as history.)

So why is this year different? The timing is “just a fluke,” he guesses.

But, though the uproar could have happened in many years, the choice by those like Spike Lee and Jada Pinkett Smith to skip the ceremony helped draw attention to something that could have otherwise passed quietly: “If they hadn’t said they’re not going to the Oscars, we would all have observed all of this [racial disparity] but it wouldn’t focus the attention. If they want to be pleased with themselves, they can say, yes, they’ve once again opened up the dialogue.”

Read more: The Oscars Diversity Debate Used to Be a Joke

It’s a dialogue that, in the historian’s telling, has been around for quite some time, as Hollywood seems to “reinvent the wheel” each time a scandal comes up, and will continue to do so until change sticks. For example, Mapp points to backlash to Elizabeth Taylor’s casting as Cleopatra for the 1963 film—”Liz Taylor was gorgeous and I was a fan, but she didn’t look like [Cleopatra]”—as parallel to recent uproar over the casting of Joseph Fiennes as Michael Jackson. That problem works both ways, too: white actors get to play people of color, on the argument that they can carry the part, but black actors who are just as talented are never able to play non-black roles. Mapp recalls talking to a friend about how Lena Horne was unable to play a biracial character in the 1951 movie of Showboat and the friend suggesting that perhaps audiences wouldn’t buy a black actress in the part, to which he countered that they had bought Katharine Hepburn as Asian in Dragon Seed a few years earlier.

The Academy, does, Mapp believes, want to be more inclusive. One personal piece of evidence: his vast collection of posters from the history of black Hollywood was unable to find a home in an African-American institution, he says, whereas the Academy not only wanted the collection but gave it a national tour. The crucial change that’s needed, in his perspective, is to give actors of color the chance not to succeed but to fail a few times without their careers ending.

“Each year as I’ve watched all this,” Mapp says, “I always look for some reason to have hope.” For 2016, he’s already seen two stand-out examples. The film Triple 9 is notable, he says, is a sign of progress for not mentioning its characters’ races. He also points to the awards potential for Stephan James’ performance in the Jesse Owens biopic Race as a possible litmus test for whether 2016’s best roles are equally rewarded by the Academy.

“I hope that next year,” Mapp said, “we won’t be talking exactly from the same point of view.” 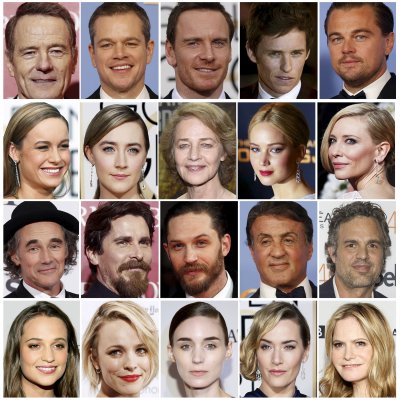 #OscarsSoWhite, but These Industries Are Whiter
Next Up: Editor's Pick