Sam Smith's Oscars Speech Was a Disservice to LGBT Youth

Sam Smith attends the 88th Annual Academy in Hollywood on Feb. 28, 2016.
Frazer Harrison—Getty Images
Ideas
By Brian Moylan
Brian Moylan is a writer and pop culture junkie who lives in New York. His work has appeared in Gawker, VICE, New York magazine, and a few other safe-for-work publications.

Ladies and Gentlemen, we need to talk about Sam Smith. The 23-year-old singer and songwriter won an Oscar Sunday night with his writing partner Jimmy Napes for his song “Writing’s on the Wall” from the James Bond movie Spectre. In his acceptance speech, he seemed to suggest he was the first openly gay man to ever win an Oscar, which, of course, is not true.

“I read an article a few months ago by Sir Ian McKellen and he said no openly gay man had ever won an Oscar,” Smith said in front of about 32 million people. “If this is the case … even if it isn’t the case, I want to dedicate this to the LGBT community, all around the world. I stand here, tonight as a proud gay man and I hope we can all stand together as equals some day.”

I hate to dwarf Smith’s achievement of winning with his lack of understanding about the gay history of the Oscars, but the writing is on the wall that younger members of the LGBT people need to educate themselves about our shared history, whether they’re speaking on stage at the Academy Awards or just going about their normal lives.

What McKellen really said in the Guardian was that no openly gay male actor has ever won a best actor Oscar, though both he and The Crying Game’s Jaye Davidson were nominated in the past. But that neglects to take into account the other LGBT actors and filmmakers who have won awards. Here’s a bit of the history Smith was missing.

The best original song category is littered with LGBT winners. The late, great composer Howard Ashman has two trophies in the category for songs from The Little Mermaid in 1989 and Beauty and the Beast in 1991. Broadway legend Stephen Sondheim has a trophy for best original song from Dick Tracy in 1990 and is an Emmy shy of an EGOT (Emmy, Grammy, Oscar, Tony). Elton John for 1994’s best original song “Can You Feel the Love Tonight” from The Lion King. And Melissa Etheridge has a Best Original Song trophy for her song from An Inconvenient Truth in 2007.

John Gielgud, an openly gay actor, won a best supporting actor Oscar for his role in Arthur in 1981 though he didn’t often discuss his personal life in public. Joel Grey won the best supporting actor award for his role in Cabaret in 1973 while he was still in the closet. Jodie Foster won two Best Actress awards—for her roles in The Accused in 1988 and The Silence of the Lambs in 1991 but like those others, she was not out at the time. So even McKellen’s claim about “openly gay” actors never having one hinges more on the “openly” than the “gay.” Before she made tons of cash on NCIS: Los Angeles, lesbian Linda Hunt, who has never really been in the closet, won an Oscar for playing an Asian man (of which she is neither) for The Year of Living Dangerously in 1982.

Alan Ball won best original screenplay for American Beauty in 2000, Pedro Almódovar won the same award for Talk to Her from 2002. Bill Condon won Best Adapted Screenplay in 1999 for McKellen’s gay-themed film Gods and Monsters, and screenwriter Dustin Lance Black took that same award home in 2009 for writing the script for Milk, a fact that he immediately reminded Smith of on Twitter.

In other words, the history of gays and lesbians at the Oscars is long and storied. Consider that in 1992, Deborah Chasnoff won the Oscar for best documentary short and thanked her “life partner” from the podium, making her the first lesbian to do so at the ceremony. That year also marked a huge protest organized by Queer Nation in front of the red carpet. Decades before #OscarsSoWhite, these activists protested the event (a few of them even got arrested) for Hollywood’s treatment of gay men and lesbians in film, specifically as the transgender murderer in Silence of the Lambs, which won for best picture that year, and the bisexual killers in Basic Instinct.

Smith was sadly misguided. I hate to be that sassy aunt who sends a “Let Me Google That For You” link when you ask a basic question, but if Smith planned to make his assertion on the greatest public stage in show business, shouldn’t he have bothered to do a little bit of research?

It’s a noble mistake that young members of the LGBT community like Smith want to see themselves as trailblazers fighting the good fight for gay civil rights, but they need to do so with a knowledge of the past. For many years, many gay men and lesbians were fighting to be the first ones to accomplish great things in any particular field, but thanks to the strides they’ve made toward acceptance, many of those races have already been won. That doesn’t mean that there’s not a lot of work for Smith to do. 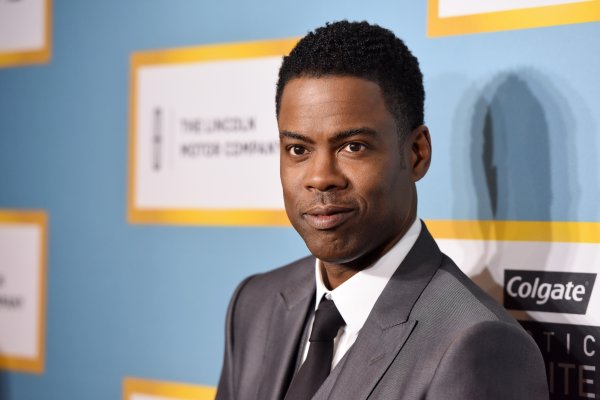 Here's How to See #OscarsSoWhite in Real Time on Sunday
Next Up: Editor's Pick