U.S. Rep. Joaquin Castro (D-TX) listens during a news conference in front of the Supreme Court in Washington, D.C., on Dec. 8, 2015.
Alex Wong—Getty Images
Ideas
By Joaquin Castro
Joaquin Castro is a U.S. Representative from Texas.

When I go to the polls on Tuesday, I’ll be thinking about my grandmother. Around 1914 she left Mexico to live with family in the U.S. She was 6-years-old, her sister was 4, and both were orphaned. My grandmother never had a formal education, so she took what jobs she could as a maid, a babysitter and a cook. She worked hard to take care of her only daughter, my mother Rosie.

I’ll be thinking about my mother, too—the first in her family to graduate high school and attend college. She went on to fight for voting rights in Texas and even ran for office herself. Her early activism inspired my own path to public service, and my brother, Julián’s, too. Our mother supported us so we in turn could get a college education, attend law school and follow our dreams.

With these two women in mind, I’ll be casting my vote on March 1 for Secretary Hillary Rodham Clinton. Of all the candidates, she can best ensure that a third woman (to-be), my 2-year-old daughter, grows up knowing she can accomplish anything, even becoming President of the United States.

For Clinton, opportunity begins with security. As Senator of New York, she represented employees at Ground Zero in the days after 9/11. She then worked across party lines to help prevent future attacks—in New York and across the country. As Secretary of State, Clinton met with global leaders to rein in climate change, fight terrorism, and—of importance to parents of daughters everywhere—protect women’s safety worldwide.

None of these acts was political. Clinton truly cares about protecting Americans at home and abroad, and she has fought for national, personal and economic security during a career that spans decades.

To that end, a modern-day version of my grandmother’s story might start in Mexico. But it could also start in Syria, or Sudan, or any other country from which emigrants seek refuge. Clinton’s immigration proposal offers a path to citizenship for undocumented families, while embracing and vetting immigrants both needed and in need.

Once here, those immigrants and their children—as well as every American—should have the chance to attend, and afford, college. Clinton’s New College Compact would create no-cost community college and low-cost four-year college, and set a cap on student debt—for citizens and DREAMERs alike.

Clinton’s vision goes well beyond immigration and education; her message of inclusion applies to every person in this country. As she said last week to a crowd in Nevada, “Tens of thousands of men and women with kids to raise, bills to pay, and dreams that won’t die, this is your campaign, and it is a campaign to break down every barrier that holds you back.”

Julián and I feel blessed with opportunity, and fundamentally believe we are living the American Dream. Ours is an immigrant story turned American story; it began with our grandmother and continues through our mother, ourselves and our children. With Clinton as president, I’m confident that citizens and aspiring citizens nationwide will fulfill their own Americans Dreams. That’s why Clinton, above all candidates, has earned my support. 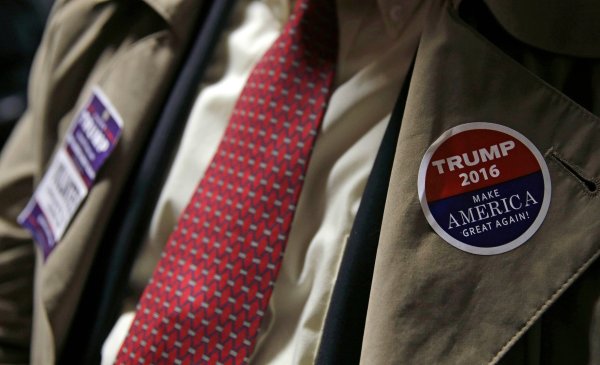 The Old White Man's Last Hurrah
Next Up: Editor's Pick