Merkel Calls for E.U. Openness as Thousands of Migrants Remain Stuck in Greece

A stranded refugee holds a child during a protest at the Greek-Macedonian border, as they wait for the border crossing to reopen, near the Greek village of Idomeni on Feb. 28, 2016
Alexandros Avramidis—Reuters
By Nash Jenkins

Tens of thousands of migrants remain stranded in Greece as neighboring nations continue to refuse to reopen their borders, a situation that some European Union officials say portends an impending humanitarian crisis.

Greek officials estimate that 22,000 migrants and refugees are now in the country, unable to go any further; they also say that figure could climb to 70,000 in the coming weeks, reports Reuters. Greece has been a significant waypoint for migrant traffic coming overseas from Turkey, but in recent weeks, those who have sought to continue north into central Europe have been turned away at the border. Macedonia, Greece’s northern neighbor, has refused to admit Afghan migrants and been strict in demanding proper documentation from all others.

About 6,500 stranded people are staying in a makeshift camp in Idomeni on the Greek-Macedonia border. On Sunday, several hundred migrants staged a protest, imploring Macedonia to let them continue onwards.

Greece has asked Europe for additional funding to cope with the bottleneck situation. German Chancellor Angela Merkel, who has been one of the most outspoken European political figures in the ongoing migrant crisis, encouraged other E.U. leaders to support Greece rather than quarantine it, saying Europe cannot allow Greece to “fall into chaos.” On Sunday, Merkel defended Germany’s open-border policy, rejecting mounting criticism over her refusal to cap the number of migrants entering the country.

“There is so much violence and hardship on our doorstep,” Reuters quoted her as saying. “What’s right for Germany in the long term? There, I think it is to keep Europe together and to show humanity.” 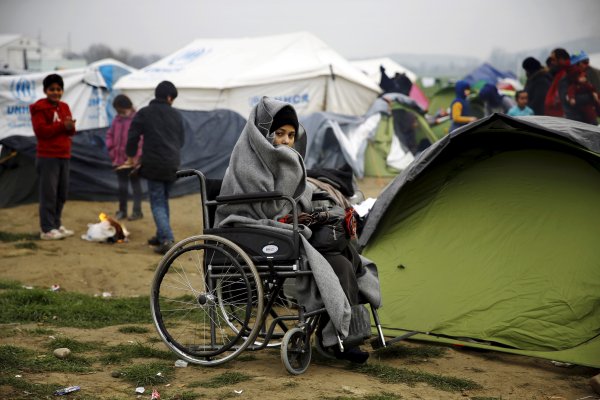 E.U. Leaders Struggle to to Control Migrant Crisis
Next Up: Editor's Pick