Hillary Clinton scored a decisive victory in South Carolina’s Democratic primary on Saturday, riding strong support from black voters to an easy win against Bernie Sanders before they turn to the series of Super Tuesday states voting next week.

The former Secretary of State won by an overwhelming margin of some 50 points with most precincts reporting, despite months of heavy spending by Sanders, who poured millions of organizational and advertising dollars into the state in an attempt to break through Clinton’s so-called “firewall” of black voters.

“Today you sent a message: In America, when we stand together, there is no barrier to big to break,” Clinton told cheering supporters. “We’ve now gone through four early states, and I want to congratulate Sen. Sanders on running a great race. And tomorrow, this campaign goes national!”

Sanders aides anticipated a loss, but his allies believed in the weeks ahead of the primary that they would make inroads among Clinton’s base of black voters. “The goddamn firewall has a crack in it,” the hip-hop artist Killer Mike, a prominent Sanders surrogate for black voters, said in Orangeburg on Friday.

But in the end, the firewall held. Clinton has now captured three of the four early-voting states, following her razor-thin Iowa victory and Sanders’ blowout win in New Hampshire with easy wins over Sanders in Nevada and South Carolina. A growing delegate lead and building momentum puts Clinton in a strong position as the race moves to the 11 states which vote on March 1, or Super Tuesday. Sanders, who polls showed trailing big in South Carolina ahead of the vote, had already left to campaign in Super Tuesdays states before polls closed on Saturday.

“Despite what you hear, we don’t need to make America great again,” she said. “America has never stopped being great.”

Exit polls released by CNN showed that Sanders won white voters and voters under the age of 30. But Clinton decisively won almost every other demographic, including among African-Americans by a margin of nearly 70%, as well as middle-aged and older voters, low-income and higher-income voters.

Sanders released a statement shortly after the polls closed, conceding the state to Clinton. “Let me be clear on one thing tonight. This campaign is just beginning,” Sanders said. “We won a decisive victory in New Hampshire. She won a decisive victory in South Carolina. Now it’s on to Super Tuesday. Our grassroots political revolution is growing state by state, and we won’t stop now.”

In the four days before the South Carolina primary, Clinton visited a historically black university, appeared on stage with a grammy-nominated R&B artist, held a meeting with the mothers of African-Americans who have been killed by police, and had surrogates like Cory Booker and Jim Clyburn out to campaign for her. She was in South Carolina every day since Tuesday, according to her public schedule, and had at least 10 events in the state since Tuesday.

During the same period, Bernie Sanders had just three.

Sanders’ aides have known for months that Clinton had a large advantage in the state, but that didn’t stop the campaign from spending several million dollars in advertising in South Carolina—including on a radio ad with endorser Spike Lee—and sending 200 staff to 11 offices to recruit volunteers and voters.

Clinton long had an advantage in the state, not just with African-American voters, but also with South Carolina’s self-identified moderate and conservative Democrats, who made up nearly half of voters in Saturday’s primary, according to early exit polls reported by CNN. That stands in stark contrast to the Iowa electorate, where a poll released before the caucus on Feb. 1 showed that 43% of likely Democrats in the state labeled themselves as “socialist.”

The two Democrats’ schedules reflected their vastly different hopes in the state. Clinton was campaigning for a landslide victory, while Sanders was already looking ahead to Minnesota, Colorado, Illinois and beyond. The calculus for the Vermont senator in South Carolina was daunting. Polls showed him an average of about 25 points behind in the state, and he has not shown an ability to break through with the bulk of black voters there. For Clinton, South Carolina was be a reaffirmation of her ability to attract a key segment of Democratic voters: Black voters accounted for 55% of the electorate when she lost the South Carolina primary to Barack Obama in 2008.

And Clinton did what she could to it win decisively. Thursday night found the former Secretary of State on a stage in Charleston, wearing an eggplant-colored pantsuit and dancing to the grammy-nominated R&B singer Charlie Wilson in front of a mostly-black crowd. “That voice. That energy. That intensity,” Clinton said of her musical accompanist. On Friday, she stopped at a café and ran into a bridegroom and customer with his friends and ended up in a photo of the men, who knelt at her feet, as if at a wedding. “I love having men at my feet,” Clinton said.

Sanders’ aides believe his path to the nomination rests on Super Tuesday and afterward, where he hopes to rebuild momentum after losses in Nevada and South Carolina. His aides believe he has a good chance to win at least five states—Vermont, Massachusetts, Colorado, Oklahoma and Minnesota—and earn significant number of delegates in the rest of the 11 states voting on March 1. The 74-year-old democratic socialist has far exceeded expectations in the race so far.

But Clinton’s South Carolina win could vault her through the Super Tuesday southern states with large black populations, like Alabama, Texas and Georgia, and make her difficult to catch in the coming weeks. A series of decisive wins could dampen her opponents’ online fundraising operation if his supporters perceive him losing steam. Federal Election Commission records show that while he is bringing in a record amount in small-dollar donations, he is burning through cash by spending heavily on advertising and building out his campaign infrastructure: He ended January with $14.7 million, less than half Clinton’s war chest.

Before the South Carolina results even came in, Sanders was already on a flight to Minnesota. 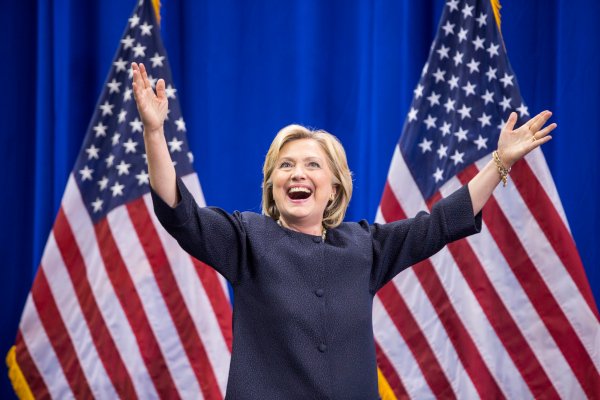 Clinton Leads Sanders in Florida Poll
Next Up: Editor's Pick