Eddie Edwards of Great Britain in action during the 90 metres Ski Jump event at the 1988 Winter Olympic Games in Calgary, Canada, on Feb. 23, 1988
David Cannon—Getty Images
By Dan Stewart

The story of Michael “Eddie the Eagle” Edwards is a classic underdog tale of an unlikely sporting hero succeeding against all the odds. It’s no wonder his extraordinary story is now a feature film, also called Eddie the Eagle

The only thing? Eddie didn’t succeed in the classic sense of the word. In fact, he came in last place in both of his events during the 1988 winter Olympics. Nevertheless, the myopic former day laborer became a hero and a household name in the United Kingdom. But how to explain such a cult of personality around a man who never won anything in his short career? Surely to be an underdog you have to have a come-from-behind victory?

Eddie’s popularity can perhaps be ascribed to the proud British tradition of the glorious loser. He is just one part of a dense modern history of popular figures celebrated by Brits—this writer included—not for their unlikely victories, but for their dogged persistence in the face of failure.

Take Tim Henman, for example. He dominated British tennis at the dawn of the 21st century, winning plenty of ATP titles and rising to 4th place in global rankings—but “Tiger Tim” is remembered more for what he didn’t achieve. He never won a Grand Slam event, and he became a perennial runner-up on the grass courts of Wimbledon, despite the fervent cheers of home supporters. In the late ‘90s and early 2000s, watching Henman lose at Wimbledon became a sort of national rite of passage — he reached the last eight no fewer than eight times, each time crashing out with the hopes of a nation on his shoulders. For a few hours every summer, he was our glorious British loser.

Then there’s Jimmy White, the great also-ran of snooker, a cue sport not dissimilar to pool that enjoys middling popularity in the U.K. White lost five World Championship finals in a row in the early 1990s, the last by a miscue so egregious that missing a clear shot is still occasionally called “a Jimmy White.”

To be sure, the loveable loser is not a uniquely British phenomenon. In 1988, the same year Edwards was wowing the crowds at the ski jump, the Jamaican bobsled team became unlikely superstars (and later the subjects of their own movie) even though they didn’t even finish their four-man event.

But the Brits seem to love it more than most. In 2000, two swimmers from Equatorial Guinea became crowd favorites and media sensations for their spectacularly poor performances at the Sydney Olympics. Eric Moussambani — later nicknamed “Eric the Eel” — finished the 100m freestyle in about twice the time it took the next fastest competitor to finish, while his compatriot Paula Barila Bolopa (aka “Paula the Crawler”) notched the slowest time ever recorded in the women’s 50m freestyle.

The pair were given their nicknames by the British media, which followed them at least as closely as its own Olympic stars. The Daily Telegraph praised them for their ability to “recapture the spirit of Eddie the Eagle.”

As for the Eagle himself, he has since become known for his regular appearances on British television — usually on celebrity-oriented reality shows such as the U.K. version of Wipeout or diving contest Splash. However, he did something on these two shows that might threaten his status as Britain’s iconic glorious loser: he won.

Read TIME’s original coverage of Eddie the Eagle at the 1988 Olympics, here in the TIME Vault: The Jests of the Rest 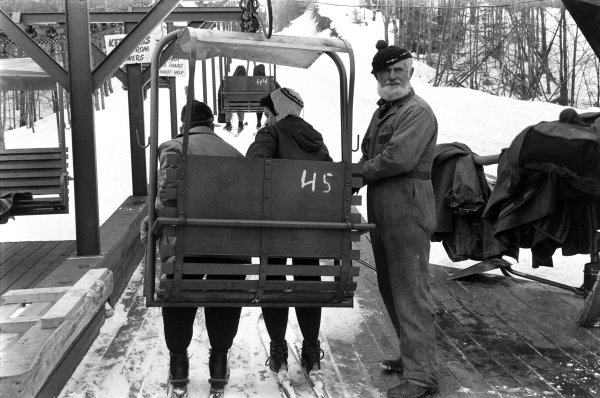 See Photos of Skiing's Early Days as a Popular American Pastime
Next Up: Editor's Pick