Eric Myers, a literary agent who lives in Manhattan, went to his local multiplex recently to see the Jennifer Lawrence film Joy. He didn’t like the picture.

Not the movie. The picture.

“The image looked flat, dim, dull—a sure sign of using a 3D projector for a 2D film,” said Myers. He may be more discriminating viewer than most, but he wasn’t wrong: Management admitted it had moved a sellout crowd into a larger auditorium without changing the lens–but they had checked with the studio first to see if it was okay. “The studio told them, ‘Hell, yes!’” Myers said. “I don’t think [director] David O. Russell would have approved.”

Studio sources say a theater would never get the go-ahead to run a film on the wrong equipment—like a 3D lens on a 2D movie. (“There’s no way on God’s green earth that would happen,” said one executive.) But at a time when theater attendance is down, and certain filmmakers are making herculean efforts to create a more sensational theater experience—like Quentin Tarantino’s 70mm “road show” of The Hateful Eight—mainstream moviegoers report getting shortchanged by substandard presentation, especially in understaffed multiplexes lacking professional projectionists.

People don’t always speak up. And do they even know the difference?

“It’s the wrong question to ask,” says director Christopher Nolan (The Dark Knight, Interstellar), a passionate advocate of shooting on film, and of giving viewers an enhanced theatrical experience. “We’re not testing the audience. We’re not quizzing the audience about formats. We’re not giving them a comparison of what it should and shouldn’t look like.” He says audiences come to the movies with a “precious optimism” that a film will be shown the way the filmmaker intended. “You don’t want to do anything to question that optimism.”

The need for higher standards “has been a troubling issue for years,” says director Martin Scorsese, who founded the nonprofit Film Foundation to promote movie preservation and restoration. “Presently, the quality of projection varies greatly from theater to theater. For theaters that still project 35mm, it’s critical that projectionists are properly trained to handle film and maintain projectors.” In the past, he says, this was done primarily through apprenticeship—“where experienced projectionists would show a young kid the ropes, working together for months or even years. It is a specialized skill and, at that time, it could be a life-long profession. Now, with the advent of digital, many projectionists have little or no experience with film.”

The issues, Scorsese adds, are basically the same with digital. “You want to provide the highest possible quality theatrical experience for the audience, making sure that focus, light levels, aspect ratio, lenses, sound quality are all perfect. Of course, that goal is often missed, especially when theaters and equipment are not maintained and projectionists are not properly trained. And unfortunately, a few bad experiences in a movie theatre can lead to an audience ultimately deciding to stay home.” He says the Film Foundation is looking into ways that they can help support this effort, working with exhibitors who are being proactive about the issues.

“I do think people are passive,” says filmgoer Fred Cohn, a music journalist based in New York who recalls several misadventures over the last few years—with Gone Girl, a 70mm print of Paul Thomas Anderson’s The Master and, most painfully, Burlesque.

“For whatever it’s worth, I wanted to see a big Cher musical,” Cohn says. “And and I couldn’t understand why this splashy chick flick looked like it was taking place in a cave.”

“They say you can project 2D through a 3D lens, but the alignment has to be absolute perfect,” says Ray Murray, the senior projectionist at Sony headquarters in New York. “And it never is.” Because the 3D process, and the glasses, fools the brain into seeing two projections as one, half the brightness is lost when projecting 2D through 3D equipment. Brightness is diminished, too, when using a 3D screen for 2D, says Murray, who added that switching over a theater can be “time-consuming and expensive.”

It’s not as if the theater chains are not responsive.

“The team tested the light levels in the auditorium and confirmed them to be below our standards,” says Ryan Noonan, a spokesman for AMC theatres, regarding the Joy screening cited above. He says all the theaters and equipment would be retested. “This is an issue we take very seriously, and we’ve gone to great lengths to ensure that every presentation is of exceptional quality.”

Noonan said that with more than 8 million “show starts” nationwide in 2015, guests reporting poor presentation accounted for less than 0.0072 percent of those show times. “Even so, we continue to use that feedback to follow up on concerns and work toward eliminating them all together.”

No all problems are rooted in the 2D/3D conflict. Nor are they necessarily digital-based.

“It can be poor masking,” says Mike Maggiore of the rep house/art house Film Forum in Manhattan, referring to the way a film’s projector is tailored to a film’s width. Cinemascope, just for instance, can have an aspect ratio of 2.35:1, which refers to the image’s width vs. its height. “You see a ‘Scope film shown that’s masked for 1:85, so the image spills off the sides,” Maggiore says. The solution? “I always sit on the aisle in case something goes wrong.”

“I don’t know if you’ve ever been to the Loew’s Jersey,” says New York Film Festival director Kent Jones, referring to the landmark theater. “But now my sons went there to see The Shining. When they came back they said, ‘It was weird — the subtitles went on and off during the movie.’ I said, ‘Oh no…’” The boys had traveled across the river to watch a DVD.

Not all outrages are quite so… outrageous. In fact, says Nolan, the era of digital projection has probably improved conditions overall, especially since the days of scratched, faded 35mm prints at second- and third-run houses. (Missing reels and melting prints were an inside joke in the Tarantino co-directed Grindhouse of 2007.) The irony is that, for all the nostalgia, a lot of Boomer-era movie nuts grew up watching terrible prints under terrible conditions.

“People got used to seeing films in small, not very conducive spaces,” says Bill Megalos, a cameraman, director and instructor at Chapman College. “Look at the old Thalia, the Elgin, or Theater 80 St. Marks—that tiny little theater in the Village.” He explains that conditions have always been much better in Los Angeles. “Here in L.A., there are the studios, the labs. They want to put on a show. They managed to keep the larger movie palaces open longer, and when they cut them up they cut them up better.”

And across a country dotted with mini-malls and multiplexes, movie-loving audiences are often at the mercy of theaters that need to cut costs and do so via reductions on staffing, including projectionists.

“It’s not rocket science,” says Ray Murray, “but sometimes these people are running a 23-screen complex and unless the picture’s upside down, nobody complains. And if it is upside down, it’s not always certain there’s someone who can fix it.”

Nolan said he regularly visits multiplexes to check on the state of movie projection, and in Los Angeles it’s pretty high quality. Sometimes even better.

“I went to the Vista a couple of weeks ago, with my kids to see the new Star Wars,” Nolan says, referring to the vintage theater in Los Feliz. “J.J. Abrams insisted they have a 35mm print at the Vista and it looked absolutely stunning. It was thrilling. It took me back to watching the original. And—by the way—the place was packed.” 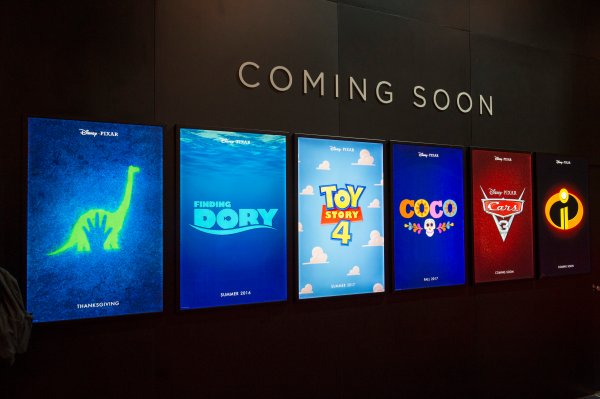 Watch Dory Discover Her Next Adventure in the New Finding Dory Trailer
Next Up: Editor's Pick