A Syrian from Idlib sits at a medical clinic in Turkey, where he is being treated for injuries from a Russian air strike
Ivor Prickett for TIME
By Jared Malsin / Kilis, Turkey

Major Mohamed Ali Sadek can’t feel his legs. A commander with the Levant Front, a mainstream rebel group in northern Syria, he is lying in a hospital bed in the Turkish town of Kilis, at least one bullet in his back courtesy of forces from a rival Kurdish-led armed group that attacked a checkpoint where he was stationed north of Aleppo on Feb. 4. Sadek is 38 but looks older, with dark gray hair, a deeply lined face and a bristling beard. A veteran of the Syrian army, he says he joined the rebellion because of outrage at the abuses of President Bashar Assad’s regime. “We went out for food and for our rights, and because we were wronged in the dungeons of the intelligence services,” he says. But now, in the wake of an immense Russian-backed offensive by the regime and other factions, Sadek says, “The Free Army in the northern countryside is about to be eliminated.”

As it enters its sixth year, the rebellion against the Assad regime is in crisis. Backed by a Russian bombing campaign, Assad’s troops and allied militias are advancing and have nearly encircled the rebels’ most important redoubt in Aleppo, Syria’s largest city before the war. In the area surrounding Aleppo, the rebels are in a three-pronged fight with the regime, the forces of ISIS and now Kurdish militias that are using the cover of the Russian air offensive to expand their territory at the expense of the predominantly Arab Syrian rebels.

And if the rebels are losing the war, they may be losing the peace as well. On Feb. 22, the U.S. and Russia announced an agreement for a cease-fire between the regime, its allies and the opposition, but the pact was met with skepticism from observers who have seen past truces crumble. The proposed cease-fire, planned to go into effect on Feb. 27, doesn’t include ISIS or al-Qaeda affiliates, which could undermine any agreement. It also excludes “other terrorist organizations designated by the U.N. Security Council,” a phrase that analysts say leaves the door open to continued Russian bombing of opposition groups under the pretext of fighting terror. “They are all bandits and terrorists,” Russian Prime Minister Dmitri Medvedev told TIME in an interview on Feb. 13.

Sadek still believes the mainstream opposition–rebels opposed to both the regime and the jihadists–can reverse the government’s gains if they get help from the Western countries that share their goal of ending Assad’s reign. “We can do it,” he says. “We are the owners of the land. All of the fighters are there.” But if that help doesn’t come, Sadek believes, “the Islamists will take over.”

It may be hard to believe now, but it wasn’t long ago that the Syrian rebels thought they were poised to win this war–or at least it seemed Assad could lose it. By 2012, the opposition had captured sections of major cities such as Aleppo and Homs, and the regime was in retreat. But Assad refused to go, and his forces resorted to widespread killing, placing entire cities under siege and dropping barrel bombs–crude containers packed with explosives that kill indiscriminately–on civilian areas. By mid-2015, the war had reached a bloody stalemate, with the country divided among the regime, dozens of rebel groups, ISIS and other jihadists, and Kurdish groups, all of which claimed slices of territory ceded by the regime.

That stalemate was broken by Russia’s entry last September. Heavy Russian air strikes–most of them focused on Assad’s rebel foes, not ISIS–helped the regime push back mainline opposition groups in the country’s northwest and south. Shi’ite-dominated militias from Iraq, troops from Iran and fighters from the Lebanese group Hizballah all bolstered the offensive. In January and February, Russian air strikes helped proregime troops cut a vital supply line leading from the rebels’ ally Turkey into Aleppo.

Of course, civilians have paid the heaviest price. Russia and the Syrian government have launched widespread attacks on hospitals, schools and other civilian infrastructure. On one day, Feb. 15, air strikes hit at least five hospitals and a school sheltering displaced people, according to the U.N., killing as many as 50. A U.N. assessment published Feb. 22 found that regime forces have deliberately targeted hospitals, and starkly concluded, “War crimes are rampant.” “Today in Syria, the abnormal is now normal,” Médecins Sans Frontières president Dr. Joanne Liu said in a statement after one MSF hospital in Syria was hit with four missiles, killing at least 25. “The unacceptable is accepted.”

As the fighting worsened, some 70,000 Syrians fled their homes in the first 16 days of February. But they weren’t able to flee Syria. At least 2.6 million Syrian refugees already live in Turkey, the largest refugee presence in any single country in the world, and in early February, Turkey moved to seal the border with Syria. Ankara says it favors the creation of a “safe zone” for refugees in northern Syria, but until that can happen, Turkey’s new policy has essentially trapped tens of thousands in a war zone. “The people in those camps are really in a state of panic,” says Priyanka Motaparthy, a researcher at Human Rights Watch. “It really is very much a disaster in the making. If people try to rush the border, if their panic reaches that level, that’s very dangerous.”

Some of the Syrians who have fled the recent escalation–and were allowed into Turkey for medical treatment–described relentless attacks on civilian targets resulting in the depopulation of entire towns. Assad Breir, 60, fled Tal Rifaat, which lies on the strategic highway between the Turkish border and Aleppo. Although they had no experience fighting, his two sons had gone to join the last-minute defense of the town against Kurdish militants, he says. The evacuation of the town was rushed and chaotic, and Breir seems to struggle to make sense of his memories as he tells his story. He managed to enter Turkey by joining a convoy carrying injured people from the town, including four of his relatives. Breir never saw his sons again. He was told they had been killed in the fighting. “In Tal Rifaat, everything was killed, down to the ants and the birds,” he says.

The beleaguered Syrian rebels are desperate to offset Russia’s aid to the Syrian regime–and they believe the only way to do that is for allies in capitals like Washington and Riyadh to send them antiaircraft missiles and other game-changing weapons. But in its final year in office, the Obama Administration is unlikely to alter its policy, which is focused not on the Assad regime and its Russian backers but on combating ISIS. That limits support to the rebel groups battling both Assad and ISIS. There’s no guarantee more arms would prevent the rebels from losing. And with rebel groups fractured and constantly reorganizing, Washington is worried any heavy weapons could potentially fall into jihadist hands.

But the reality is that Vladimir Putin’s move into Syria has already tied the U.S.’s hands. Even establishing a no-fly zone to protect rebels and civilians–a measure supported by the likes of Hillary Clinton and Turkey’s President Recep Tayyip Erdogan–could bring the U.S. into conflict with Russia. “The only thing worse than getting sucked into a quagmire in Syria is getting sucked into a quagmire that leads to World War III,” says a senior Administration official.

Quagmire may be unavoidable. The People’s Protection Units (YPG), a Kurdish-led armed group in Syria, are taking advantage of the Russian bombing campaign and capturing rebel-held towns in northwest Syria. That places the YPG, one of the forces backed by the Pentagon in the fight with ISIS, into conflict with Syrian rebels armed by the CIA. It also infuriates Turkey, a NATO ally that backs the Syrian rebels but considers the YPG a terrorist group. In response, Turkey has begun launching artillery attacks on YPG positions north of Aleppo–positions so close that the din of exploding shells can be heard along the Turkish border.

With bombs exploding in its cities, its proxies losing ground in Syria and refugees massing on its borders, Turkey now faces a strategic impasse similar to the U.S.’s. Turkey has called for an international ground force to invade Syria–an unlikely scenario–and it could launch its own air strikes on Kurdish or ISIS positions. But any stepped-up intervention risks bringing Turkey into conflict with Russia. “That’s a political choice the Turkish government is going to have to make,” says Aaron Stein, a senior fellow at the Atlantic Council in Washington.

The Assad regime has strengthened its grip on part of Syria but still lacks a formula for a clear military victory. Its recent advances may only force the conflict into a new phase in which extremist groups like ISIS continue to gather strength, taking in fighters from battered rebel battalions. The rebels, though they’ve officially signed on to the peace deal, have little faith in diplomacy. “We are accustomed to a norm where from one international decision to another, the calamity increases,” says Zakaria Malahefji, a spokesman for Fastaqim Kama Umirt, a rebel brigade in Aleppo.

Even if a cease-fire or peace deal could be reached, the regime’s persistence means some rebels will keep fighting. “As long as the Assad circle controls the security establishment, the fighters can’t really go home,” says Robert Ford, a former U.S. ambassador to Syria. “They’ll always have to worry about a knock on the door late at night, and no one will be able to protect them.”

One of those fighters is Mamar Ubin. He is 19, and the war has dominated his life. An agricultural worker from a village in the northwest, he joined a rebel group roughly seven months ago and was soon deployed to the front lines facing regime forces in the hills near the city of Latakia. In early February, he suffered a head wound in a drone attack. His comrades took him to Turkey, where he is now recovering in a hospital in Reyhanli.

The strike left Ubin, already gaunt, with a patchwork of stitches across his forehead and over one ear. Yet he can barely sit still as he recounts tales from his months on the front lines. As soon as he recovers, Ubin plans to rejoin the fight. “I’ll stay steadfast until I die,” he says. “The war is going to be long. It won’t end in one or two days.” 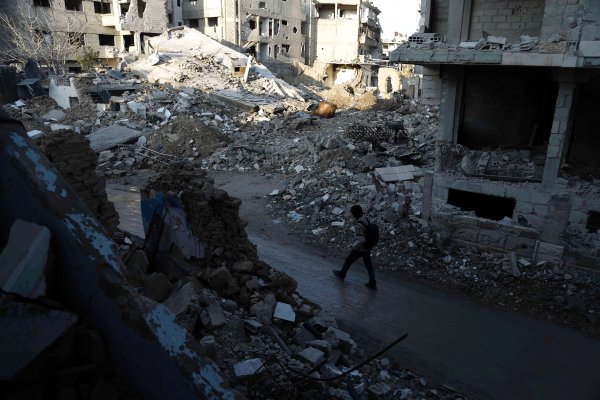