Campaigns are supposed to make the choices clear, but the first 11 months of the Republican nomination fight felt a lot more like chaos, with so many candidates that the debate stage split in two and Saturday Night Live struggled to staff skits. Insult tweets triumphed over policy positions, and the spectacle was, well, spectacular.

The states that have already voted–Iowa, New Hampshire, South Carolina and Nevada–have awarded just 133 of the 1,237 delegates needed to win the nomination. But the intense early hand-to-hand contests have narrowed down the unruly field. And three radically different men have emerged with plausible paths to the nomination.

Donald Trump, as he never stops reminding the nation, leads the pack, demonstrating that he is more than just a media fad or reality showman. His brand of postideological triumphalism makes a message out of dominance and turns winning into a conviction, stoking nationalist and nativist fury in a way not seen in this country for generations. Though he hasn’t shown he can win a majority of GOP voters in any contest or poll, he is on track to win the nomination absent a shake-up in the race. He easily captured victory in three out of four contests, and record turnout gave him more votes in Nevada than his next two rivals combined.

The two men angling to take him out have résumés that suggest they might be doppelgängers: both Tea Party darlings; both conservative Americans of Cuban descent; born five months apart, Cruz in 1970 and Rubio in 1971; both freshman Senators with little claim on executive experience. But their designs for the nation, in both policy and strategy, reveal a sharp contrast.

Rubio’s offer is the future, a youthful rainbow coalition he showcased with his second-place finish in South Carolina, where he stood onstage next to Indian-American governor Nikki Haley and African-American Senator Tim Scott. “We are the party of everyone,” he said, on his way to his distant second-place finish in Nevada. “I will never divide our country to win an election.”

Cruz sells something very different, a no-surrender return to partisan and cultural war paint. His promised path to general-election victory makes almost no appeal to moderates or racial minorities. Instead he seeks to turn out millions of conservative white voters who have sat out past elections, with appeals based in talk-radio outrage, ideological purity and religious devotion. “The screaming you hear now from across the Potomac is the Washington cartel in full terror that the conservative grassroots are rising up,” he said as the South Carolina results placed him third.

Though the path to 1,237 delegates is long, the longer Trump stays in front, the harder it will be to defeat him outright. Only 16% of the delegates will be awarded by winner-take-all states, making it progressively harder for the front runner to be overtaken. For this reason, the campaigns have been preparing to fight it out at the convention. If Trump can be denied 1,237, the remaining candidates can converge around an alternative, empowering other candidates still in the race, retired neurosurgeon Ben Carson and Ohio Governor John Kasich, as possible power brokers.

The most immediate project for the stop-Trump forces is painfully simple: find a convincing argument that Trump would be a worse nominee, something no Republican has been able to do yet. Strategists on the sidelines have been tearing their hair in frustration as Cruz and Rubio and other candidates focus on the battle for second. “No one is organizing a campaign with different message hits each day. No one has brought in victims of his bankruptcies, gone to Atlantic City and held press conferences, attacked him on cultural stuff,” says Stuart Stevens, the top strategist for Mitt Romney’s 2012 campaign. “It’s mind-boggling.” 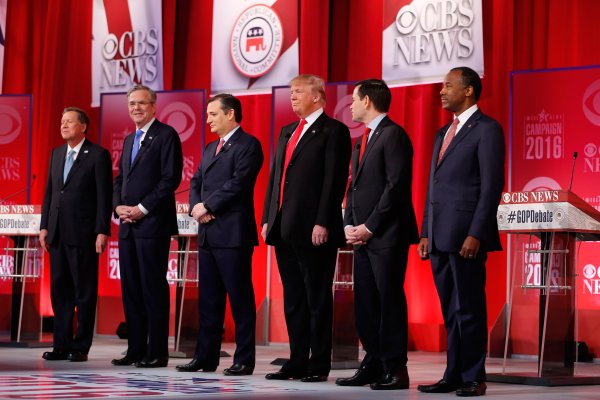 Republican Insiders Plan for a Convention Fight
Next Up: Editor's Pick