Donald Trump appears to have high levels of support among the nation’s intolerant population, according to a New York Times deep dive into polling data.

The Times found that nearly 20% of Trump supporters did not approve of freeing the slaves, according to a January YouGov/Economist poll that asked respondents if they supported or disapproved of “the executive order that freed all slaves in the states that were in rebellion against the federal government”—Abraham Lincoln’s Emancipation Proclamation.

Trump himself has never advocated for white supremacy, but some of his followers may. He has, however, called for a moratorium on Muslims entering the United States and called Mexican migrants “rapists.”

Exit polls from the Republican South Carolina primary reveal that 74% of voters in the state favored the Muslim ban—Trump won 41% of that group, according to the Times, which described Trump supporters as a “coalition of voters on people who are responsive to religious, social and racial intolerance.”

Trump, a billionaire outsider, has talked his way to being the front-runner in the 2016 GOP race, causing much of the Republican establishment to scramble in an attempt to find a suitable candidate to beat him. This remains to be seen as Trump won the Nevada caucuses Tuesday by a wide margin, beating Marco Rubio and Ted Cruz by more than 20 points. 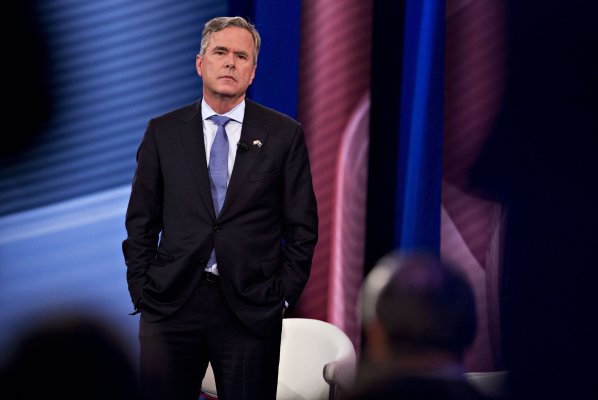 Jeb Bush to Donors: 'I'm Sorry'
Next Up: Editor's Pick