The Republican Party’s remaining White House hopefuls clashed openly over immigrants in the United States illegally at the Thursday night’s debate in Texas.

The Republican race so far has rewarded Trump’s bluster and anti-immigration rhetoric. Trump has tapped into a frustration among voters, and he has won three states so far with his pledge to round up the estimated 11 million immigrants in the country illegally.

“Look at our borders. They’re like swiss cheese,” Trump said in the debate’s opening moments.

The tense moments quickly escalated with Trump and Rubio shouting over each other. Rubio said Trump was a new convert to the subject and benefited from work at his businesses from those in the country illegally. Trump said Rubio was a lightweight who has no experience.

It was a moment that encapsulated not just this campaign but also the fight happening inside the GOP about its posture toward the growing immigrant population.

Rubio, who helped write a bipartisan immigration bill that Cruz opposed, said Trump’s rhetoric doesn’t line up with his record. “A lot of these positions are new to him,” Rubio said, before showing sharp elbows. “You have brought in over a thousand people from all over the world to take those jobs instead,” he said of Trump’s companies. “You’re the only person on stage who has been fined for hiring people illegally.”

Trump said they were part-time workers during the hottest months of the year. “I’ve hired people. No one up here has hired people,” Trump said.

He then returned to his signature pledge to build a wall along the United States’ border with Mexico. Rubio had a quip ready: “You’ll be using illegal immigrant labor to do it.”

The freshman Senator from Florida has started jelling Establishment-minded opposition to frontrunner Donald Trump. The process began last weekend, when Rubio showed a strong second-place finish in South Carolina’s primary and effectively forced one-time-mentor Jeb Bush from the race. In days since, Rubio has been working hard to line up support from donors, fellow lawmakers and former Bush backers.

His first moments of the debate was exactly what the Establishment needed to see from Rubio.

Rubio needed the CNN debate to make his case to voters at home ahead of the voting on March 1. On that date, 12 states—Alaska to Georgia—have their nominating contests and award 624 delegates to the nominating convention. It will be the biggest day on the calendar in terms of delegates, and one that will either show Republicans coalescing around an alternative to Trump, or Trump continuing his unstoppable march to the nomination.

Rubio is now trying to position himself between Trump and the GOP’s convention in Cleveland. He is leaning on newfound support to help him get his scrappy campaign up and running at full speed in new states, and he is working the phones hard in search of new donors. “He wasted no time,” said a former Bush bundler who hasn’t decided if he will accept Rubio’s offer to join the campaign.

Indeed, many activists and donors are still not ready to go all-in for Rubio. After all, they have spent the last seven years trashing another first-term Senator with a compelling life story who ran for the White House: Barack Obama. Changing the party affiliation after a name on a ballot will not undo years of nurtured resentment.

Even so, there aren’t many better choices for Establishment-minded conservatives. Sen. Ted Cruz of Texas is another first-termer with ambition, but his rigid orthodoxy has won him few friends in Washington. Ohio Gov. John Kasich has been campaigning as an unerring optimist, but has yet to do well outside of New Hampshire. And retired neurosurgeon Ben Carson, a first-time candidate who has stumbled, remains a favorite for some religious voters who has yet to see any meaningful success.

That leaves Rubio, who has gobs of raw political talent and potential. He has been collecting delegates with second- or third-place finishes, and a flood of endorsements has kept his press aides busy with announcements. But he has yet to show that he is the best vessel for the GOP to stop Trump’s takeover of the party. Rubio is trying to convince them that he is, ahead of Tuesday’s balloting. Thursday night’s debate might have been his last chance to reach those voters. And, judging from the first moments, he was logging a good showing. 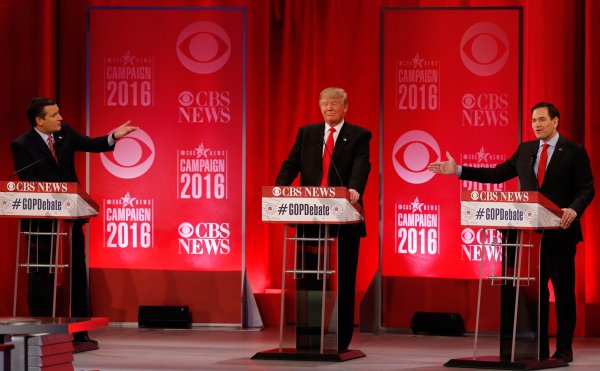 How to Watch Tonight's Republican Presidential Debate
Next Up: Editor's Pick