The traditional treatment for ovarian cancer is surgery followed by rounds of monthly chemotherapy. The treatment is effective, but there is growing evidence that exposing tumors to such high dose toxic agents at one time is effective in killing cancer cells in the short term, but may encourage chemo-resistant cells to flourish over time. That’s what led a team of researchers, with a new study published Wednesday in the New England Journal of Medicine, to try tweaking the protocol.

A team led by Dr. John Chan, from the California Pacific-Palo Alto Medical Foundation and the Sutter Cancer Research Institute, investigated whether modifying the regimen might improve outcomes and limit some of the recurrence. The women were given weekly doses of chemo in lower doses as opposed to the once-every-three-week standard, which is given at higher doses. Taken together, women would be getting more chemo than they would once a month, but less of it at a time. Most of the women also took a popular new drug called bevacizumab, which is sold by the name Avastin and essentially suffocates tumors but cutting off their ability to grow new blood vessels.

Chan was interested in the weekly regimen because there’s some evidence it can work. But as Chan learned in his study, the practice may be more complicated than previously thought. He and his team report that they did not find much difference in the time that women were free of their disease following treatment whether they received the weekly or the monthly chemo sessions with paclitaxel and carboplatin. The findings, however, weren’t actually as negative as they appear.

MORE: It May Soon Be Possible to Screen for Ovarian Cancer

When he looked at all of the nearly 700 women in the study, there was no difference in outcomes between those assigned the weekly therapy and those assigned the monthly one. But when he divided the women according to whether they took bevaciumab or not, there was a significant difference in the time they were disease-free, which is how treatment effectiveness is measured. The 16% of women in the study who did not take bevacizumab and had weekly chemo had 14.2 months without signs of their ovarian cancer progressing, compared to 10.3 months for those getting monthly chemo.

That suggests, says Chan, that somehow the bevacizumab was having a different effect when the chemo was more frequent than on the monthly schedule. He suspects that with the weekly dosing, the bevacizumab and paclitaxel, which, like bevacizumab, also discourages blood vessel formation, are somehow competing with and canceling each other out. “My hope was that the bevacizumab combined with the weekly paclitaxel would be synergistic or additive,” he says. “We would have two drugs that both hit the blood vessels for ovarian cancer, which is a very [blood-vessel dependent] cancer, to knock it down.”

While bevacizumab is approved to treat cancer in the cervix, brain, lung kidneys and colon, it is not approved as a first treatment for ovarian cancer (it is approved for ovarian cancers that don’t respond to other chemotherapy). So the findings provide some reassurance for women uncomfortable with the idea of using a drug that hasn’t been approved to treat their cancer as a first option—Chan’s study shows that existing drugs, but on a weekly schedule, may be just as effective as a regimen involving bevacizumab.

“Clinicians don’t make decisions based on one study,” says Chan. “But this study, combined with others, clearly suggests that weekly therapy should be an up-front approach for treating ovarian cancer.”

At a recent conference of cancer experts where he presented his early findings from the study, Chan says he polled the audience about how they treated their own ovarian cancer patients; many said they were already giving their patients the weekly chemo regimen rather than the standard monthly one. Now they have more evidence for that practice, and they know that women who decide to get the weekly treatments should resist the urge to add bevacizumab, even if it is a newer agent, to their regimen. 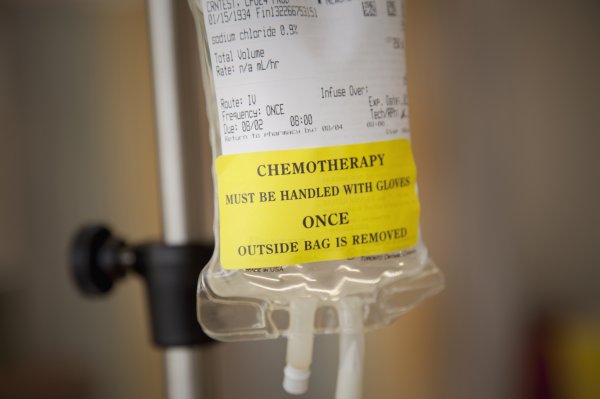 Controlling Cancer May Be Better Than Getting Rid of It Entirely: Study
Next Up: Editor's Pick