Kanye West Maintains He Did Get Taylor Swift's Approval for 'Famous'

Kanye West is sticking to his story about the most controversial line on his new album, The Life of Pablo.

Despite denials from Taylor Swift’s camp, West says he really did get the pop star’s approval for the song “Famous,” which includes the lyrics, “I feel like me and Taylor might still have sex/ I made that b—- famous.”

“I called Taylor!” the rapper said during an album release party for Yo Gotti on Tuesday night in West Hollywood, Calif. “I said, ‘Look, Taylor. I spoke to my wife about it.’ I said, ‘How do you feel about this line, Taylor?’ I was like ‘Taylor, I feel like me and you still might sex.’ She was like ‘Ooo!'”

When West first unveiled “Famous” at a Madison Square Garden listening party and fashion show earlier this month, the reference to Swift—whom he infamously interrupted at the 2009 MTV Video Music Awards—was widely covered in the media. On Twitter the next day, West clarified that he “did not diss Taylor” with the song and that “she thought [the line] was funny and gave her blessings” during an hour-long phone conversation.

Swift’s version of events differs. Following the song’s release, a representative for the singer denied that West asked for approval, saying in a statement that he asked Swift only if she would release the song on her Twitter account. (She did not.) Swift’s rep also said the “Blank Space” singer was never informed about the “I made that b—- famous” line and that she cautioned West against “releasing a song with such a strong misogynistic message.”

When she took home the award for Album of the Year at this month’s Grammy Awards, Swift continued to distance herself from the song, using her acceptance speech to fire back at West’s lyrics. “There are going to be people along the way who will try to undercut your success, or take credit for your accomplishments or your fame,” she said. “But if you just focus on the work … you’ll look around and you will know that it was you and the people who love you who put you there, and that will be the greatest feeling in the world.” 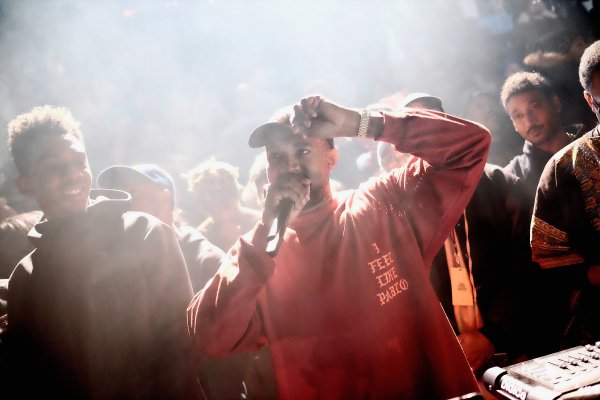 Kanye West Rants at 'Idiot' Music Producer on Twitter
Next Up: Editor's Pick