The bickering over replacing the late Justice Antonin Scalia on the U.S. Supreme Court has taken a bitter turn.

As the White House sought to clarify whether or not Vice President Biden had advocated against the nomination of a Supreme Court Justice during an election year in 1992, Senate Republicans signaled there would be little way forward for the president.

Republicans on the Senate Judiciary committee announced Tuesday that the body would not hold any hearings for whoever the president nominates for the position. Sen. Chuck Grassley, the chair of the committee, sent a letter to Senate Majority Leader Mitch McConnell indicating the Judiciary Committee would “exercise our constitutional authority to withhold consent on any nominee to the Supreme Court submitted by this president to fill Justice Scalia’s vacancy.” The letter was signed by every Republican on the committee.

Later in the afternoon, McConnell told reporters it was his view and the view of “virtually everyone in his conference” that the next president should nominate a replacement for Scalia.

“I believe the overwhelming view of the Republican conference of the Senate, in the Senate is this vacancy should not be filled by this lame-duck president,” McConnell said. “That was the view of Joe Biden who was the chairman of the Judiciary committee in 1992.”

A video of then-Senator Biden arguing against President George H.W. Bush sending a hypothetical nominee to his committee in the thick of an election year resurfaced on Monday. “The Senate Judiciary Committee should seriously consider not scheduling confirmation hearings on the nomination until after the political campaign season is over,” Biden said at the time.”Senate consideration of a nominee under these circumstances is not fair to the president, to the nominee, or to the Senate itself.”

Though Republicans have been citing the Vice President in their arguments, the White House sought to debunk their reasoning on Tuesday.

‘We’ve observed in the past that we can spend a lot of time throwing quotes back and forth…but when you consider the record of Sen. Biden and his service on the Judiciary Committee, it’s a record that hard to beat,” White House Press Secretary Josh Earnest said Tuesday, noting that Biden helped secure the nomination of nine Supreme Court Justices during his time in the Senate. “He wasn’t just in the United States Senate so that he could confirm Supreme Court Justices appointed by Democrats.

In this instance, Earnest said, the Obama administration wants the Senate to “precisely as Biden did when he served in the Senate,” and allow the nominee to get a fair hearing.

Earnest also pushed back on the notion that the majority of Republicans in the Senate were in favor of withholding votes on the presidents nominee, listing a handful of senators who have said they would not be against voting on a nominee. Sen. Susan Collins of Maine and Sen. Mark Kirk of Illinois have broken ranks in support of giving an Obama nominee a fair shot. The White House incorrectly said Sen. Roy Blunt of Missouri also would be open to considering a presidential nominee, but the Senator tweeted his stance on Tuesday.

The White House is insistent the president will nominate someone to replace the late conservative justice, but if this week’s bickering is any indication the president’s nominee has little to look forward to. 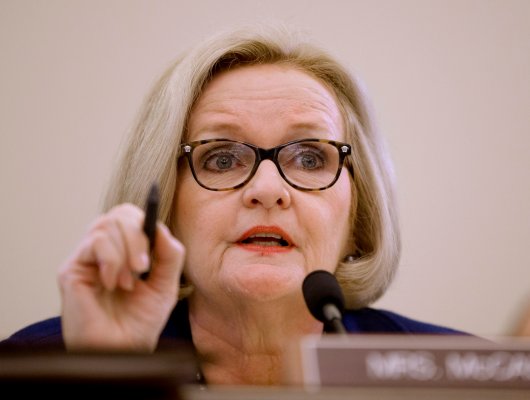 Sen. Claire McCaskill Says She Has Breast Cancer
Next Up: Editor's Pick