Wearable devices like smartwatches exploded in popularity at the end of 2015, according to a new report, highlighting the growing acceptance of the emerging technology.

Fourth quarter shipments of wearables reached 27.4 million, an 126.9% increase from the same quarter in 2014, the International Data Corporation said on Tuesday.

Wearable devices are most commonly worn on the wrist for tracking health related information like steps or sleep. Meanwhile, smartwatches are more like mini-computers that notify users about new emails and come with the ability to run apps.

Sitting at the top of the market share leaderboard, once again, was Fitbit with 8.1 million devices shipped during the quarter, or a 29.5% market share, according to IDC. Apple came in second with 15% followed by Xiaomi with 9.7%, Samsung with 4.9%, and Garmin with 3.5%.

Fitbit’s name is synonymous with fitness trackers and is commonly referred to as the “Kleenex of wearables.” Brand recognition combined with its products that range widely in price and capabilities have positioned the company to remain competitive, even as the likes of Apple and Xiaomi continue to pressure the company from the high and low-end of the wearable market.

The IDC estimated that Apple shipped 4.1 million Watches in the fourth quarter, while Strategy Analytics estimates put the number closer to 5.1 million. No matter the number, Fitbit leads Apple by a wide margin.

China’s Xiaomi continued to find success in the wearable market by shipping 2.7 million of its budget-friendly fitness trackers in the quarter. Xiaomi’s wearables cost $11 for a basic step counter to $13 for a band capable of tracking steps and heart rate, according to the IDC. In the U.S., users can buy Xiaomi’s Mi Band for $15.

Despite Fitbit’s leadership, investors punished the company after it released its quarterly earnings and a weak first quarter outlook on Monday. The company’s shares tumbled 19% in mid-day trading on Tuesday.

To remain competitive in a growing wearables market, IDC’s Ramon Llamas suggested that companies need products that do more than simply providing step counts. “Historical data, like steps taken and calories burned, has been a very good start,” he said. “Prescriptive data, like what else a user can do to live a healthier life, coupled with popular applications like social media, news, and navigation, will push wearables further, and attract more users.”

Neither Apple or Fitbit yet sell the product Llamas is hoping for. That hole, of course, opens the door for new players to come in with the right devices and win over shoppers. 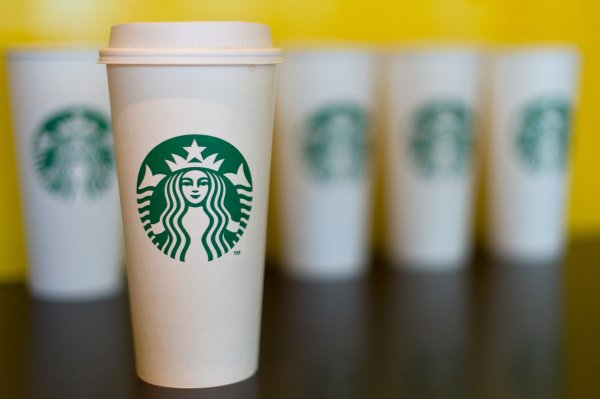 Starbucks Customers Are Furious About the New Rewards Program
Next Up: Editor's Pick