In the days and weeks after Amanda Nguyen was raped in 2013, she found herself trapped in a Kafka-esque battle with the criminal justice system. After enduring a grueling rape kit exam, Nguyen was told that under Massachusetts law, the kit could be destroyed after six months unless she filed an extension request — but nobody seemed to know how to do that. She spent “endless hours” calling police departments, sexual assault counselors and even tracked down the lab technician at the lab where her kit was tested. “The broken criminal justice system is absolutely worse than the rape itself for me,” she says. “If I were raped in another state, this wouldn’t have happened to me.”

Nguyen found that dozens of states offer inadequate protections for sexual assault victims, from discarding their rape kits to charging them for their forensic exams to failing to provide a counselor to walk them through the system. So she started RISE, a non-profit dedicated to asserting the basic rights of sexual assault survivors. And on Tuesday, Senator Jeanne Shaheen (D-NH) introduced the Sexual Assault Survivor Bill of Rights, a bill backed by RISE and other organizations designed to ensure that all rape survivors are treated with basic dignity, no matter which state they live in. There’s also a Change.org petition to demand changes.

“It tries to create a standard system so that justice isn’t dependent on geography,” Nguyen says of the Bill of Rights, which creates federal incentives to encourage states to update their protocols to ensure equal protection for victims. “I thought that in this country, we had equal rights under the law.”

The legislation, which was introduced on Tuesday and referred to the Senate Judiciary Committee, would create a grant program to help states update their systems to ensure a set of basic rights to all survivors. The Bill of Rights includes the right to a free-of-charge forensic exam (the Violence Against Women Act was supposed to remove the charge for rape kits, but survivors in many states still get a bill for their rape kit.) It also ensures that the rape kit is kept for the duration of the statue of limitations, that rape victims can be notified of the results of their rape kits (if there’s a toxicology result or if there’s a DNA match,) requires states to notify victims if they plan to destroy their rape kits, and provide avenues for survivors to make sure their kit stays preserved.

“Without a clear set of rights articulated in the law, it’s difficult for even the best law enforcement professionals to ensure that survivors receive fair, effective, consistent treatment, particularly across counties and states. We have to do better,” said Senator Shaheen in a statement. “We have to create an environment where survivors feel like the system is working for them, not against.” Staffers for the Senator said that the bill was drafted after Nguyen approached their office with her story, and they worked together on the bill.

When she’s not drafting bills with Senators to enact wide-ranging reform for sexual assault survivors, 24-year old Nguyen is a Deputy White House Liaison at the State Department, and is training to be an astronaut. She also worked with Funny or Die to highlight the absurdity of the draconian patchwork of laws affecting sexual assault survivors.

Watch the video exclusively above. 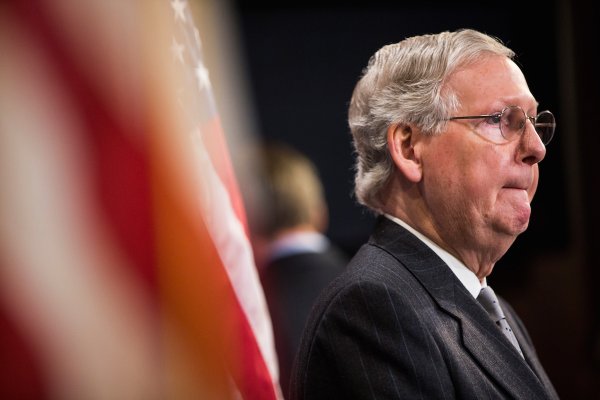 This Is What the Founding Fathers Thought About Confirming Supreme Court Nominees
Next Up: Editor's Pick