Melinda Gates arrives at the The Hollywood Reporter's Annual Women In Entertainment Breakfast at Milk Studios in Los Angeles on Dec. 9, 2015.
Steve Granitz
Ideas
By Kirsten Salyer
Kirsten Salyer is a writer and the former Deputy Editor of TIME Ideas

If Melinda Gates could choose one superpower, she says would pick something that many of us might envy: “more time.”

Gates explains her choice in the just-released Annual Letter from the Bill and Melinda Gates Foundation, which outlines the organization’s upcoming goals in its global mission to reduce poverty, improve health, and increase education and access to information. This year, the letter is directed towards teens, and Gates’ focus is on time poverty.

“As we’ve done this work for the foundation—I call it a learning journey for the organization and for Bill and me—you start to see the layers upon layers that keep people in poverty,” Melinda Gates told TIME. “And the time issue has kept coming back to me.”

Compared to men, women globally spend about twice as much time on unpaid work—labor done for no pay, including cooking, cleaning and caring for children and the elderly. That’s an average about 4.5 hours a day, with the gap between genders ranging from 45 minutes in Scandinavia to five hours in India. In the U.S., where the gap is 90 minutes, if we could put a value on women’s annual unpaid work, it would total about $1.5 trillion.

“We all have 24 hours a day,” Gates says. “It’s kind of funny to me that we’re in 2016, and who decided that women should be the ones to do all this unpaid work? We don’t even call what’s happening at home ‘work.’ Unpaid work is work.”

The issue is especially important in developing countries, she says, where women are often expected to do the majority, if not all, of the housework, and where a lack of technological progress means such work can take more time.

“You often see the man going out to the market, but the women is kept home or at the farm because she has this huge burden of labor. If you don’t address that, you lock her in a cycle of poverty. And you lock her daughter, too, because she or the husband will ask the daughter to come home early to attend to the meal or fetch the water. The daughter is still doing dishes at 10 at night. There’s no light for her to study for her homework. It reverberates this cycle.”

How do we close the gap? Gates says it would require a three-step approach:

“We want both boy and girls to realize there’s this hidden cost in society,” she says. “While they think things might be equal, as soon as that first child comes into a relationship, things start to go backwards. All of a sudden the gender norms take over. Unless boys and girls start to talk about this now, talk about what they see going on and about what their expectations are, and until we start to put a number on this unpaid work, I don’t think you’ll ever get there.”

2. Reduce it with innovation.

This is where Bill Gates’ desired superpower of “more energy”—a cheap, clean source of power—and other technological advancements come in. For example, affordable energy in the home could mean women have access to ovens instead of having to take the time to chop firewood, or have running water instead of having to walk to a well. A seed that is drought- or pest-resistant could mean less time spent in the field.

As Gates explains, it’s not just about having men take on more of women’s unpaid work—that alone wouldn’t fix the problem. It’s about lowering the amount of unpaid work through innovation, education and technology. Access to contraceptives could mean fewer children and thus fewer hours spent on childcare. And access to digital technology could mean better health information to reduce time spent caring for the family’s health needs.

In addition to changing expectations of gender roles in the home, Gates advocates for paid medical and family leave policies that allow both women and men to take time to do the unpaid work of childcare and housework.

The benefits of such a shift go beyond fairness: Balancing the amount of time spent on unpaid work between men and women could allow more women to enter the workforce, increasing global GDP by about 12% globally in the next decade. It would also give more women the opportunity to find fulfillment in their daily lives, Gates says.

“I think of fulfillment as being able to do whatever it is you want to do, being able to have your talents go out and meet whatever it is in the world’s need that you want to do,” she says. “When I talk to my girls and my son about what their hopes and dreams are for their lives, I hope they shoot as high as they want to go and that they can do both. That ought to be true for all kids around the world.” 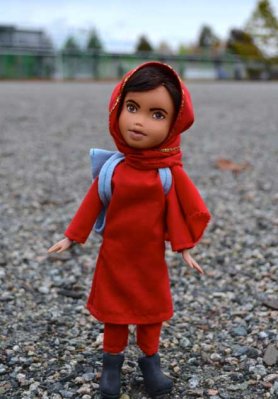 This Artist Transforms Bratz Dolls Into Empowering Role Models For Young Girls
Next Up: Editor's Pick