The nurses in red scrubs were not lost amid the slot machines and card tables. They were working as minders and muscle for Bernie Sanders in the Las Vegas MGM Grand Casino.

RoseAnn DeMoro, the 67-year-old director of National Nurses United, a 185,000 member union, trailed the candidate Saturday at a short distance into the employee cafeteria. “How are you?” Sanders said in abrupt Brooklynese to the cooks and card dealers, enduring selfies and bits of smalltalk. The Vermont senator waved around vigorously, his hand rotating like a lawn sprinkler before he noticed his escorts. “Nurses!” he shouted, grabbing DeMoro’s hand for a quick picture.

After he left for the next casino, DeMoro smiled placidly, noting that she had known Sanders long before he was high-profile enough for federal protection. “We were his bodyguards before Secret Service was there,” she said. “We have a lot of ownership of this campaign.”

No one doubts that, especially not Sanders’ rivals at the Hillary Clinton campaign. “I am the only Democratic candidate who does not have a SuperPAC,” Sanders says regularly from the stump, driving home Clinton’s reliance on a network of outside groups, funded mostly by wealthy individuals, who are paying for much of her research, press outreach and advertising. But Sanders does have the nurses, who are registered as a SuperPAC with the Federal Election Commission, similarly work in concert with his campaign staff and have spent heavily to get him elected.

In recent months, the union has reported spending more than $1.7 million to elect Sanders, a number that rivals Clinton’s own SuperPAC support. They erected billboards in Iowa, New Hampshire and Nevada. They decaled buses with Bernie’s photo and began following him across the country from Iowa through New Hampshire to Minnesota, Nevada, Texas. Last week, two hundred nurses descended onto Las Vegas to campaign for Sanders, working as caucus place monitors and going door to door to turn out the vote. At the center of the operation was DeMoro, a former sociology doctoral student with a grandmotherly tone who has become one of the nation’s most vocal and influential labor organizers.

The Vermont senator worked with DeMoro’s group in Oakland in 2014, when he came out to march with the nurses during the Ebola scare, and before that they talked when Sanders was helping draft the Affordable Care Act. DeMoro, who is not a nurse herself, shares views with Sanders on everything from single-payer healthcare to debt free college to taxing Wall Street speculation, and she has led her union to reach far beyond the medical issues in national politics. It was no surprise when the union endorsed Sanders for president in August.

“Elvis, man, so good to see you!” DeMoro called out to a wheelchair bound Elvis impersonator, after leaving the casino. Then she turned to a reporter. “This is the most we’ve ever done for any candidate,” she said. “Bernie is carrying our agenda from our perspective. He wants a compassionate world.”

Both DeMoro and Sanders reject outright any comparison between the nurse SuperPAC and the constellation of SuperPACs supporting Clinton. “It’s not a super PAC. It basically lacks the appropriate definition at the FEC,” she said. “It’s just our nurses. We don’t take outside money from anyone.” All the money spent in DeMoro’s group comes from nurses’ union dues, and Sanders does not help the union raise money. (Clinton’s campaign chair has met with prospective donors to her SuperPAC.) The nurses union was not set up and organized with the help of Sanders’ confidantes. (Clinton allies played a role in organizing her SuperPAC network, though part of it was already in place to support Barack Obama.) “Bernie doesn’t want a super PAC. He wouldn’t want us to be in a super PAC,” said DeMoro.

As a matter of law, however, there is little difference. Campaign finance laws restrict the amount of money any individual, union or corporation can give to presidential campaign. But after federal court rulings in 2010, there is no limit on the amount of money outside groups funded with donations of any size can spend to elect or defeat federal candidates, as long as they register with the Federal Election Commission. Independent groups are barred from privately coordinating paid advertising with the campaigns they support, but in practice the legal separation between SuperPACs and the campaigns they support are far from air tight.

Like the Clinton operation, which coordinates on message strategy for non-paid communications, Sanders and DeMoro’s nurses have sometimes blurred the line. In Nevada, the nurses received training from the Sanders campaign. Sanders organizers in Nevada even prepared packets of voter files for the nurses to use on their canvassing rounds. Sanders and DeMoro often cross paths on the campaign trail. “Every time I see him he goes, ‘We need to discuss single-payer,’” DeMoro said. “He’s as serious as a heart attack.” Sanders and the nurses have often held joint events, and he openly thanks them for his support, once calling them “one of the sponsors of my campaign.”

In a mucky political world dominated by self-interested billionaires, backroom deals, push polls and blistering attack ads, the cheerful nurses in red scrubs bring a decidedly human face to the race for the Democratic nomination. Unlike political operatives, nurses have a reputation for being nice. They save lives for a living. It’s hard to turn away a nurse knocking on your front door. A Gallup poll finds that nurses are more trusted than high school teachers and clergy. Thus, the nurses’ Bernie bus boasts, “The Most Trusted Profession Trusts Bernie”. “We are healers,” said Michelle Vo, a California nurse who was canvassing for Sanders in Las Vegas. “We take care of the 99%.”

The Clinton campaign is not impressed with the distinction. “It’s disappointing that Bernie Sanders continues to claim he doesn’t have super PAC support when a super PAC has already spent more than $1.7 million boosting his campaign,” said Josh Schwerin, a spokesman for the Clinton campaign.

DeMoro, who has a mild, syrupy voice, joined a precursor to the National Nurses United in 1986. She rose in the union’s ranks and amped the nurses’ rock-ribbed, liberal profile, going toe-to-toe against former California Gov. Arnold Schwarzenegger, campaigning for current California Gov. Jerry Brown and President Barack Obama. “I’m looking for absolutes. I’m not interested in the neo-liberal agenda. I’m not interested in bipartisanship,” DeMoro said in a 2011 interview with Bill Moyers. “I’m interested in social change that actually puts society back with the people. We have to start all over with the way we do politics.”

Under DeMoro’s leadership, the nurses’ goal is nothing less than to build a movement to push a tax on Wall Street transactions, European-style healthcare and a big infrastructure bill. Their mission, they say, is to cure ailments beyond the hospital bed. DeMoro sees her group more as one of the big movement unions of the 1930s. “It used to be in the ’30s unions were about a community, they were a social movement. And then what happened is that was transmorgified into business unions,” she said. “We need a humanistic government and we need a movement to sustain that.” That is their why; Sanders is their how.

The nurse volunteers are believers. “We see the pains of people who don’t have enough money to get the care they need,” said Gina Macalino, a nurse from California who spent several hot days trudging around Las Vegas’ suburbs, canvassing for Sanders. “We know that it’s became of economic disparity.” The nurses provided healthcare at the Occupy Wall Street camp in Zucotti Park, Lower Manhattan. For some, the Obama years have been a disappointment. “The problem with Obama is honestly he’s a really good pragmatist. He engages the possible and goes there. Bernie is a visionary and build a movement to achieve the vision,” DeMoro said.

The nurses can play tough. In the days after Nevada, they compiled a list of misconduct in the caucuses, which have a history of being rife with irregularities on the margins. They called for United Nations observers to oversee the process and accused the Clinton campaign of cheating. On Saturday, the nurses said Clinton supporters deceived Nevada caucus-goers by dressing as nurses. DeMoro tweeted a photo she said proved Clinton volunteers were disguising themselves. The story went viral and angered Sanders supporters. In fact, Clinton volunteers were dressed in red and blue to help organize caucus-goers.

At the New York-New York casino on caucus day in Nevada, Rep. Joaquin Castro of Texas, well-coiffed and cheery, greeted Nevadans and asked them to caucus for Hillary Clinton. He laughed easily and spoke in Spanish. Next to him was a union nurse in her scrubs, making a harder sell. “He’s not bought and paid for. He’s going to bring about universal healthcare, free public college,” Maria Bell said to a woman about Sanders. The woman gestured she did not understand English. But Bell was undeterred: “It’s very important that you pay attention,” she said. In the end, Clinton won that caucus site, 196 votes to Sanders’ 97.

There is a long road ahead and the nurses aren’t stopping after the Nevada loss. Their buses will be in South Carolina this week, as well as New Mexico, Texas and Colorado. They are sure to see their candidate somewhere along the way. 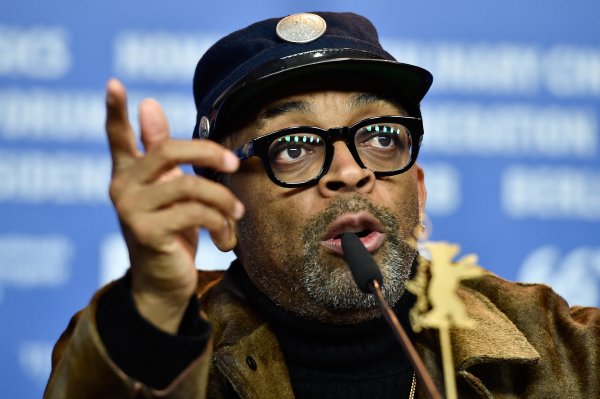