Kasich Says Women 'Left Their Kitchens' to Campaign for Him

A female supporter upbraided Ohio Gov. John Kasich at a rally for saying that women “left their kitchens” to campaign for him.

The Republican presidential candidate was telling the crowd at a town hall in Fairfax, Virginia, about an earlier campaign for the state legislature in 1978 when he made the remark.

“I didn’t have anyone for me,” he said. “We just got an army of people, who, and many women, who left their kitchens to go out and go door to door and put yard signs up for me. All the way back, when—you know, things were different. Now you call homes and everybody’s out working. But at that time, early days, it was an army of women that really helped me get elected to the state Senate.”

Kasich campaign spokesman Chris Schrimpf responded to criticism of the remarks by emphasizing that they were in reference to his previous campaigns, which he said were “homegrown affairs.”

“They’ve literally been run out of his friends’ kitchens and many of his early campaign teams were made up of stay-at-home moms who believed deeply in the changes he wanted to bring to them and their families,” Schrimpf said in a statement. “That’s real grassroots campaigning and he’s proud of that authentic support. To try and twist his comments into anything else is just desperate politics.”

Kasich came in fifth place in this weekend’s South Carolina primary after placing second in the New Hampshire primary. 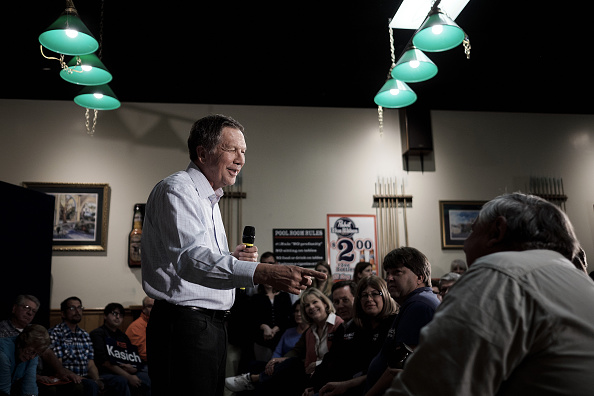 Watch a Young Supporter's Tearful Speech as He Meets John Kasich
Next Up: Editor's Pick