Clinton Takes Victory in Nevada After Hard-Fought Battle With Sanders

Hillary Clinton declared victory early on Saturday afternoon in the Nevada caucuses, holding off an intense push by Vermont Senator Bernie Sanders in recent weeks to break her support among Latinos and African Americans.

It is an important milestone for Clinton, who continues to face doubts about her strength after a crushing defeat in New Hampshire. Early reports in Nevada indicated she won a majority of African-American voters, and she will leave the state with renewed confidence.

“It’s clear that there is so much more to be done,” Clinton said in a victory speech on Saturday, interrupted frequently by a cheering crowd. “The truth is we aren’t a single-issue country. We need more than a plan for the big banks,” she continued, a veiled dig at Sanders’ main focus. “The middle class needs a raise and we need more jobs. We need jobs that pay well and can’t be outsourced.”

Clinton also referenced the frustration with the status quo that has shaped this election in both parties.

“Americans are right to be angry,” she said. “But we’re also hungry for real solutions.”

With a solid victory in her pocket, Clinton’s road forward is promising. She turns now to South Carolina, where she has a strong lead among black voters and the support of the state’s top Establishment figures, including Representative Jim Clyburn. A couple of days later, Clinton goes in to Super Tuesday with a strong advantage over Sanders, and is ahead in polls in most states, particularly in the South.

Still, with most precincts reporting, Clinton is leading with just 53% and Sanders at 47%, which means Clinton’s lead is narrower than she hoped for. Already, it is clear that Clinton will be in for a longer fight than anticipated.

Clinton’s campaign had a significant head start in the race in Nevada and was clearly leading the Sanders campaign until just a few weeks ago. But Sanders poured money into the state, outspending Clinton in advertisements on radio and television at first, though Clinton spent slightly more in the past couple of weeks. He also had double the Clinton staff on the ground.

Regardless of Clinton’s win, Sanders has already shown he can narrow the gap with Clinton, presaging a more difficult fight for the once presumptive front runner.

“Nevada was supposed to be a state ‘tailor made’ for the Clinton campaign, and a place she once led by almost 40 points,” Sanders said in an email to his supporters after he conceded the race and phoned Clinton to congratulate her. “But today, we sent a message that will stun the political and financial establishment of this country: our campaign can win anywhere.”

In remarks to supporters who chanted “Feel the Bern” on Saturday afternoon, Sanders turned his focus to next week’s South Carolina primary and the upcoming Super Tuesday votes. “The wind is at our backs — we have the momentum,” Sanders said, predicting that the Democratic convention in Philadelphia this summer will see “one of the great political upsets in the history of the United States.”

Earlier this month, on the night of the New Hampshire primary, Sanders’ aides said internal numbers showed them gaining on Clinton. When he won the state by a 22-point margin, Clinton supporters pointed to Sanders’ weakness among Latino and African-American voters as her saving grace.

The first big test of the former was Nevada on Saturday; for the latter, South Carolina one week from now.

Clinton won big in the caucuses on the Las Vegas Strip, where she made a concerted effort in the days before to reach out to employees and pushed employers to give casino workers time off. She came away with 19 delegates to Sanders’ 15.

Both campaigns made a hard effort to reach out to Latinos. Sanders brought in undocumented immigrants and DREAMers from Phoenix and elsewhere to canvass for him in Spanish-speaking areas of Las Vegas. Clinton aired an emotional television ad that featured her comforting a girl with undocumented parents.

In the hours before the caucus, both Clinton and Sanders toured the hotels on the Strip in a last-ditch effort to persuade caucus-goers to support them.

Sanders walked through the MGM Grand hotel employee lunchroom, accompanied by his wife and a train of Secret Service agents. He cupped his hand and waved. “How are you!” he shouted at the workers who chanted his name. One MGM Grand employee, Caridad Capdevila, ran up and gave Sanders a loving hug. “He’s with the people,” she said in halting English.

Clinton visited the Harrah employee cafeteria to cheers of “Hillary, Hillary!” Clinton stood for selfies with the employees and directed them to the caucus location. “I need your help this morning, in the showroom, 11 a.m.,” she repeated as she walked around. “I need your help. The showroom.”

Clinton surrogates toured the state, including America Ferrera, and her husband President Bill Clinton and daughter Chelsea in the days before the caucus. Representative Joaquin Castro, a representative of Texas and twin brother to talked-about vice-presidential pick Julian Castro, greeted caucus-goers in the New York New York Hotel. “We need you,” Castro told them.

Meanwhile, the National Nurses United, a union that has thrown its support behind Bernie Sanders, sent 200 red-clad nurses to Nevada, and they patrolled caucus places and pitched their candidate. Just feet away from Castro, nurses lobbied Clinton supporters. “He’s not bought and paid for,” one nurse, Maria Bell, told a woman with a Clinton sticker.

Even if Sanders does not win some of the next major contests in South Carolina, on Super Tuesday and beyond, he will continue to be a strong presence in the race. Because delegates are awarded proportionally in each state, Sanders can win nearly half of the popular vote and stack up a strong position for weeks and months.

In the minutes after the race was called for Clinton, allies of both candidates boasted they had made a significant win.

“If anyone bought into the Establishment lie about the existence of a firewall in the 2016 Democratic contest, the fact that Sanders nearly erased a 25-point deficit in Nevada in less than a month,” said Democracy for America’s executive director Charles Chamberlain, “proves that Bernie Sanders’ grassroots campaign can win anywhere.” 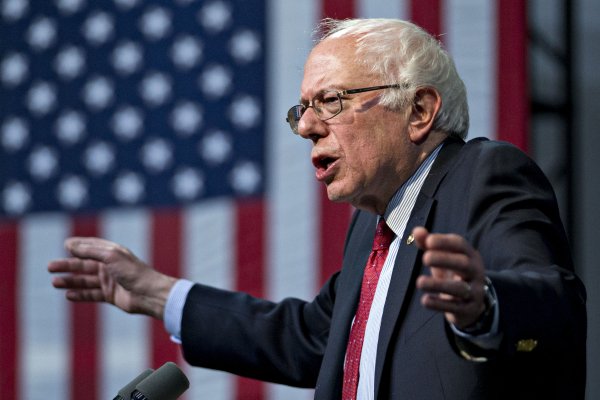 Clinton's Lead Over Sanders Is Shrinking Rapidly Among Latino Voters, Poll Shows
Next Up: Editor's Pick