How to Discipline Your Child, According to a Marine Corps Drill Instructor

Master Sergeant Chris Lopez is a former Marine Corps drill instructor, combat vet, and father of 3. But if you think he gets in his kids’ face, Full Metal Jacket-style, every time their common sense goes AWOL, you have a major malfunction. Because, getting 90 recruits to do whatever he wants? Easy. Getting one 4-year-old to pick up his socks? Hard. You can’t treat a toddler the same way you treat a grunt because the toddler is going to beat you in a screaming match every time.

That said, Lopez has a core set of principles that are equally applicable on the parade ground as the playground. You bet he has an opinion on modern day, “let them feel their feelings” philosophies on discipline — and it’s not what you think.

The Goal Is Self Discipline

“When we get a batch of new recruits, we don’t know what degree of structure they’ve had in their lives. We try to set a baseline. Your basic function is to bring the heat, to stress them out, and to be an enforcer,” says Lopez. Fortunately for your kid, you’re intimately familiar with exactly how much structure they’ve had in their lives, so you don’t need to bring any heat right off the bat (newborn infants are notoriously hard to train, anyway). The long-term goal, says Lopez, is to make sure that your kids are doing the right thing when there’s nobody there to supervise them — not doing the right thing just as you’re about to take away the iPad.

But Sometimes You Need “Imposed Discipline”

Speaking of iPads, Lopez has found the one that belongs to his son is a useful tool when he’s displaying a lack of self-discipline. He doesn’t make the kid drop and give him 20. Rather, “We do the timeout thing but it’s usually after some verbal warnings. We don’t do corporal punishment. We go with things my kids are more attached to; if he’s not listening and being polite and it gets to the point where we have to punish, he doesn’t get it back until tomorrow. That’s when it hits home. To me, it’s the same effect as when I was a child and it was like getting spanked.”

Fatherly: 10 Ridiculously Simple Things This Security Expert Does To Keep His Home Safe

Speaking of punishment, Lopez isn’t so tough that he goes all R. Lee Ermey on toddlers. “All 3-year-olds want to do things that are dangerous. I try not to let it get to point where it becomes a tantrum with my son. I’ll change the channel. If I tell him to stop doing something, and he won’t do it, I’ll explain why again and I’ll divert his attention. You can punish them, but they’re not going to understand why. It’s a rough one to identify before you get unreasonably upset, So I’ll remove both of us from the situation.” Childhood Development and Empathy Queen Dr. Laura Markham would be impressed.

The Difference Between Punishment and Correction

Lopez isn’t trying to bounce a quarter off his kid’s Elmo sheets. “The way we do it in our household is as close to the way the Marine Corps does it,” he says, “We don’t believe in the zero defect mentality, where as soon as you make a mistake you’re punished. I’m a firm believer that there’s a difference between punishment and correction. If your child makes an honest mistake it’s not a big deal. It’s not as big a deal as they know the right answer and do something bad.”

Fatherly: The Most NSFW Guide To Picking A Preschool You Will Ever Read

Being Afraid of Mistakes Is Worse Than Making Them

“I don’t believe in physically doing something to somebody, or making them go out and digging a fighting hole. I believe in education,” says Lopez. “Allow your children — or the guys that you’re leading — to make those mistakes. That’s where you’re going to get your best ideas. If you’re constantly critiquing [recruits] on how to do things, they’re never going to learn to solve the problems themselves.” That’s easy for him to say — he’s never seen your kid dig a fox hole.

“Because I Said So” Isn’t a Reason

Kids are like soldiers, in that they only get the benefit from the how’s and why’s of rules once they can follow them. “As training progresses, the explanations start happening more,” says Lopez of his recruits. “The more you explain why you’re making them do what they’re doing, the more buy in, and the more efficient they are in doing the task. The goal is to be as patient as I can, and explain things as well as I can, without me saying ‘Because I said so.'”

Fatherly: 8 Reasons I Want My Daughter To Talk Back

How to Go From Major to Dad

“Any drill instructor will tell you, it’s very intoxicating.” says Lopez. “You have 90 kids who want to be a Marine. They’re going to run over every other recruit to prove that to you. It’s very difficult to go from 90 recruits doing everything you want them to do, to home, where you have to wait a half hour for your toddler to pick up their socks and shoes.”

Some guys hit the gym, and some hit the bar, but for Lopez, he has one trick that takes him from Big Daddy on the base to Private Dad at home. “When I was an instructor, I’d use audiobooks like a reset button. It gave me something to focus on other than work, so I could go back and be the normal person I am. Being a drill instructor you’re not going to act the way at home that you do to the recruits.” What works best? James Patterson? Deepak Chopra? Being A Chill Father For Dummies? “Anything by Mark Twain. I’m actually listening to James Joyce right now. The Portrait of An Artist As A Young Man.” Pvt. Daedelus, reporting for duty. 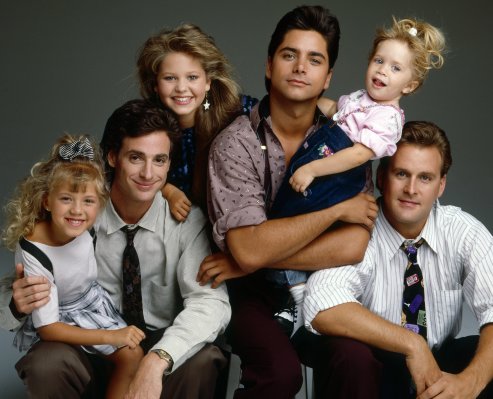 Why Full House Matters for Fathers, Then and Now
Next Up: Editor's Pick