Sanders and Clinton Compete for Young Latino Votes in Nevada

Angel Fernandez, an undocumented 20-year-old born in Mexico, did not drive five hours from Phoenix to Las Vegas to campaign for Bernie Sanders just because the two share an opinion about immigration reform.

Fernandez, whose undocumented mother once worked as a landscaper in Phoenix’s intense summer heat and was nearly deported, could have been the textbook single-issue immigration voter. But walking through Sin City’s outskirts on a windy Thursday afternoon, Fernandez balked at the idea of being just an immigration activist. He said he is supporting Sanders more for, well, everything.

This election, Fernandez said, is a referendum on the status quo—not just the immigration system.

“Whether it be climate change, immigration, black lives or gun control, all of this is intertwined,” Fernandez said, canvassing clipboard in hand. “There are some very powerful people in this country and they’re pulling the strings on all of it. Once you get to the root of the problem, all of these roots will fall.”

Fernandez is one of many young Americans who are rejecting identity politics in favor a wider lens. Criminal injustice, corruption, unequal pay for women and even climate change are faces on the same die, politically conscious millennials say. It is impossible to view issues as separate, they say—and in doing so, they are upsetting the usual logic of campaigns. It is a rebuke to the traditional mode of winning elections, in which candidates tailor their message to isolated groups, with promises given like obligatory favors: immigration reform for Latinos, equal pay for women, criminal justice reform for African Americans, legal protections for members of the LGBT community.

As Sanders and Hillary Clinton spent a final day on Friday fighting for Nevada’s large Latino population in advance of Saturday’s caucus, that shifting ground was apparent as young voters in the audiences demanded much more than an answer on immigration.

“Our parents’ generation thought about immigration like, ‘once this gets fixed, something else gets fixed,'” said Sandra Gamez, a 24-year-old Clinton supporter and DREAMer. “Our generation understands that all these different issues are intersecting and come as part of an intersectional identity.”

A canvasser for Sanders, Maria Castro, said she is a “multifaceted” voter.“I am a U.S. citizen that has an undocumented mother. That also cares about student debt, that cares about climate change, that cares about living wages, that cares about black lives. I care about all these issues,” said Castro, 22, on Thursday outside a Sanders campaign office in Las Vegas that shares a building with a Spanish-speaking tax accountant. “I’m not just a one-issue person.”

Nevada, the first contest where a significant portion of voters are Latino, is a curtain-raiser that will presage how successfully Clinton and Sanders appeal to Latino voters in the race to come. Latinos were 15% of caucusgoers in the state in 2008, and the numbers are likely to be higher this year. And Latinos will be an increasingly crucial part of the electorate in 2016 for Democrats. They voted overwhelmingly for Barack Obama in 2012 and the Republican Party has done little to win their support in this election cycle. Donald Trump’s rhetoric about deporting 11 million undocumented immigrants and building a “beautiful wall” at the Mexican border has pulled the entire field of Republican candidates to the right and alienated many.

Sanders, who has been criticized as sputtering and tone-deaf on race issues, may be surprisingly well-positioned to capture young Latinos looking for a bigger message. When he speaks to a Latino audience, the Vermont senator mostly delivers the same rote lines about bringing undocumented immigrants out of the shadows but then returns to his usual themes: political corruption, corporate influence, income inequality and social injustice.

“All of these things that young people are experiencing, that the Latino community is disproportionately experiencing, it’s all under this umbrella that [the system] is broken and not working for the everyday person,” said Lucy Flores, a former Nevada state legislator who is running for Congress and has backed Sanders. “Sen. Sanders manages to bring all of that together for people.”

Clinton has hewed closer to the familiar political playbook. She began in the first month of her campaign with a roundtable of DREAMers in early May, promising comprehensive immigration reform. She has drafted Latino surrogates to criticize Sanders and pick through his record. She wields a rudimentary Spanish when it is useful. “You know, I was the first person to call out Donald Trump,” Clinton said at the MSNBC/Telemundo town hall also on Thursday in Las Vegas. “’Basta, enough!’ I said, ‘Basta!’ enough of this prejudice and paranoia and the kind of language that he uses.”

Clinton repeatedly attacks Sanders for his opposition to the 2007 immigration reform legislation introduced by Sen. Ted Kennedy, a precursor to the failed effort in 2013 and one that had extensive, though lukewarm, Latino support. Her criticism—as well as opposition from Rep. Xavier Becerra of California and Rep. Luis Gutierrez of Illinois, two Clinton supporters—has put Sanders on the defensive. Clinton’s super PAC points out that Sanders said in a 2007 television interview that he opposed the immigration bill because the extensive guest worker program would drive down wages for Americans. But he now justifies his vote by pointing to the guest worker program’s potential abuse of migrant workers, which the Southern Poverty Law Center called “akin to slavery.”

“I voted against the legislation in 2007 in agreement with groups like LULAC, one of the large Latino organizations, in agreement with the AFL-CIO, for a number of reasons,” Sanders said in the town hall on Thursday in Las Vegas.

Sanders, though, can seem wooden when addressing Latinos concerned about immigration reform. When a woman asked Sanders at the Thursday town hall when he would take action to end rules barring undocumented immigrants from returning to the U.S. for 10 years, he seemed to hedge. “That I can’t tell you,” he said. When pressed by a moderator, Sanders said touchily, “I’m not a dictator here. It has to do with a little bit of cooperation from the Congress.”

And Clinton’s efforts to court Latinos have at times backfired, as when her campaign in December published a post called “7 things Hillary Clinton has in common with your abuela,” prompting the hashtag #NotMyAbuela.

But young Latino supporters of both candidates have reasons for their loyalty. When asked what their top reasons were for supporting Sanders, a group of canvassers all gave different answers, from corruption to climate change and student debt.

“What’s popular in our generation is striking a chord with everyone, rather than compartmentalizing,” said Fernandez, the undocumented DREAMer from Phoenix. “It all leads back to the same thing if you follow the money.” 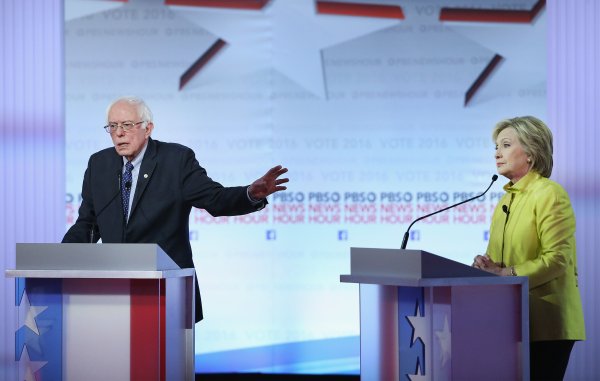