U.S. Steps Up War on ISIS With Strikes in Libya

Like a spreading wildfire, the U.S.-led war on ISIS leapt nearly 2,000 miles from its initial battleground straddling Iraq and Syria to the north African nation of Libya early Friday.

American air strikes targeted a Tunisian militant linked to the Islamic State in the western Libyan city of Sabratha, a U.S. military official said. While the death of Noureddine Chouchane could not immediately be confirmed, local officials said the 3:30 a.m. attack killed 41 people.

Noureddine Chouchane, one of the suspects behind an attack in July on a beach resort near the Tunisian city of Sousse that killed 38 tourists.
Tunisian Interior Ministry—AFP/Getty Images

The Islamic State is believed to be training fighters in camps near Sabratha, 50 miles from the Tunisian border. ISIS elements trained in Libya carried out two attacks in Tunisia last year that killed 60 people.

“Destruction of the camp and Chouchane’s removal will eliminate an experienced facilitator and is expected to have an immediate impact on ISIL’s ability to facilitate its activities in Libya,” Pentagon press secretary Peter Cook said in a statement confirming the attack, using the government’s preferred name for ISIS.

“Sabratha mayor Hussein Dawadi told Libya TV that the properties that had been hit were suspected to be occupied by IS,” the Libya Herald reported. “Though Sabrathans originally denied the presence of any such camp, attitudes have changed as the terrorists sought the increase their local influence and threatened the priceless Roman ruins that are the coastal town’s major asset.”

The attacks signal a stepped-up U.S.-led campaign against ISIS, which declared a caliphate in vast swaths of Iraq and Syria nearly two years ago. “With respect to Libya, I have been clear from the outset that we will go after ISIS wherever it appears,” President Obama said Wednesday, “the same way that we went after al Qaeda wherever they appeared.”

The U.S. military has been pressing for such strikes as intelligence has surfaced indicating at as many as 5,000 ISIS fighters are now believed to be in Libya, including many who fled the 18 months of U.S.-led bombing against ISIS targets in Iraq and Syria. “We’re looking to take decisive military action” in Libya, Marine General Joseph Dunford, chairman of the Joint Chiefs of Staff, said last month.

While the first U.S. strike against ISIS in Libya killed Abu Nabil al-Anbari, a senior commander, in November, Friday’s attack highlights what U.S. officials resignedly call a game of “whack-a-mole.” That’s when military force pushes the enemy from one area to another, without defeating it. “We have to follow the enemy where he goes, you know, and destroy him, root and branch,” said Army Lieut. General Sean MacFarland, who is leading the fight against ISIS in Iraq and Syria, on Feb. 1. Something similar has happened in Afghanistan, where sanctuaries in neighboring Pakistan have thwarted U.S. efforts to calm Pashtun militants in the region despite 15 years of war.

What makes ISIS’s move into Libya troubling is that for 40 years dictator Muammar Gaddafi ruled that nation with an iron fist that repressed insurgencies. But the U.S. and NATO drove him from power five years ago without any plan to fill the resulting vacuum. That’s led to chaos that ISIS has exploited. The Obama Administration has been hesitant to open up a new front against ISIS in Libya until the U.N. can help broker a unity government between the two major factions fighting to control the country. But as Friday’s strikes suggest, patience is wearing thin. “Nobody wants to see Libya on a glide slope to the kind of situation that already engulfed Syria and Iraq,” Defense Secretary Ashton Carter said last week. 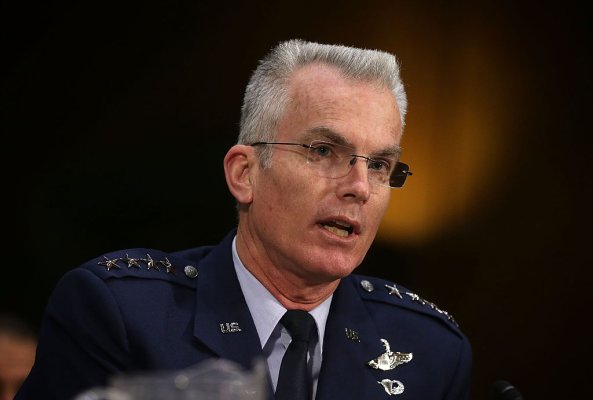 The War Over the Pentagon Budget
Next Up: Editor's Pick