So wrote Pu Liye, a deputy director at China’s official Xinhua news agency — and apparent passionate poet, on Feb 19. The object of his ardor was Chinese President and general secretary of the Chinese Communist Party Xi Jinping, who on Friday visited the offices of Xinhua, as well as those of the party mouthpiece, the People’s Daily, and CCTV, the national broadcaster.

Xi’s news tour was given blanket coverage by state media, which posted photos of the nation’s leader trying out the anchor’s chair at CCTV and smiling over a Xinhua news desk decorated with a bank of landline phones. Three hours after Pu published the poem on his personal WeChat social-media account, his paean had garnered 20,000 hits. (A previous poem Pu posted the day before only received 314 hits.)

On its Twitter feed, Xinhua noted that Xi gave reporters a few tips, like encouraging “journalists to write stories that ‘people like to read.’” While Twitter is blocked in China by state censors, state media like Xinhua are prolific users of the social-media service, often posting pictures of indolent pandas, comely female soldiers and the occasional cute cat.

China’s journalists are subject to intense censorship, with editors receiving daily directives on what topics have been deemed taboo. Self-censorship is rampant. While a few enterprising newspapers gained fame for their muckraking after the turn of the century, their exposés have waned in recent years, as liberal editors have been sacked and investigative reporters punished. In 2015, China had the largest number of journalists behind bars of any nation, according to the Committee to Protect Journalists. Several imprisoned reporters have been paraded on state TV to confess to their purported crimes.

Read Next: The Other Side of the Great Firewall

Xi’s media tour comes as China published new rules that, if read literally, could block any foreign or joint-venture company from publishing online content “of informational or thoughtful nature” within mainland China without prior government approval. It is unclear how these regulations, which go into effect on March 10, will affect the operations of local-language sites run by international media, like Dow Jones or Bloomberg.

Xi, who took the nation’s helm in late 2012, has called for China to protect its online sphere from unwanted foreign influences. He advocates national law trumping free flow of information across state borders — a concept known as Internet sovereignty. As the Chinese President steps up a crackdown on independent thinkers — Beijing has detained hundreds of lawyers, writers and NGO workers in recent months — his government has also railed against so-called Western values, like freedom of the press and a vigorous civil society. Chinese universities have been warned against allowing such pernicious foreign values to infect young minds.

Meanwhile, the People’s Daily has increased its coverage of the Chinese leader, whose front-page mentions have far eclipsed those of his predecessors Hu Jintao and Jiang Zemin, according to a survey by the University of Hong Kong’s China Media Project. But as adulatory as these stories may be, few are as fawning as Pu’s poem, which ends with these rousing verses: 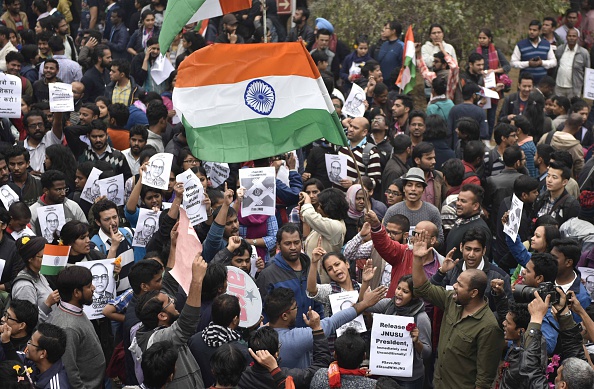