A town hall event for John Kasich turned emotional on Thursday when a young supporter shared his tearful story and got a hug from the Republican presidential candidate.

The young man said he had driven up to the South Carolina event from the University of Georgia to tell Kasich he had his support. He spoke about struggling with depression during the past year after a father figure committed suicide, his parents got divorced and his father lost his job.

“For a long time I was pretty depressed, but I found hope, and I found it in the Lord and in my friends and now I’ve found it in my presidential candidate I support, and I’d really appreciate one of those hugs you’ve been talking about,” he said, speaking at the end of the Ohio governor’s town hall.

Kasich, who is hoping to be competitive against establishment rivals in Saturday’s South Carolina Republican primary, hugged him and spoke to him quietly before returning to the stage.

“I’ve heard about the pain of people all across this country, and what I’ve learned is we’re going too fast in our lives. We need to slow down because there are not enough people who are helping those who have no one celebrate their victories, and we don’t have enough people that sit down and cry with that young man. Don’t you see that’s what it’s about?” Kasich said.

“Is there any substitute for what you just heard? There isn’t. So as Americans, let’s just renew our spirit.” 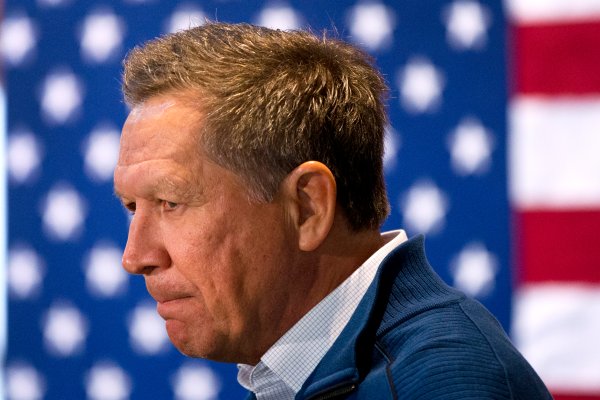 John Kasich Looks to Retool 'Light and Hope' for South Carolina
Next Up: Editor's Pick