How the Sun Protects Earth From Getting Clobbered By an Asteroid

Duck: The Chelyabinsk meteor lights up the Russian sky, in 2013
Marat Ahmetvaleev
By Jeffrey Kluger

The Earth grew up in an awfully rough neighborhood and it’s always needed the help of powerful friends. This was specially true in the early days of the solar system, during the so-called heavy bombardment phase, when asteroids and comets turned the region near the sun into something of a free-fire zone.

One of the things that prevented us from getting blown to smithereens was the fortuitous location of Jupiter which, with its powerful gravity, intercepts some of the incoming ordnance before it can reach us. That still leaves a lot of debris on the loose—witness the 66-ft (20 m) meteor that exploded in the skies over Chelyabinsk, Russia in 2013. All the same, according to a new study in Nature, it appears that we’re more protected than we knew—thanks to the powers of the sun.

Astronomers around the world keep a close watch on what they call near-Earth objects (NEOs)—asteroids that orbit through the solar system within 121 million miles (224 million km) of the sun, which brings them dangerously close to the Earth’s own 93 million mile (172 million km) orbit. Much of that census-taking is done by the Catalina Sky Survey, a program conducted principally by NASA’s Jet Propulsion Laboratory and the University of Arizona.

Recently, a team of investigators led by research scientist Mikael Granvik of the University of Helsinki began looking at the population of known NEOs and noticed something strange: While the mix of dark asteroids and brighter, more reflective ones is more or less even throughout the solar system, in the vicinity of the sun, many of the dark ones go missing. What’s more, in this case, the solar “vicinity” can be pretty huge. Smaller bodies often get torn apart gravitationally as they approach what’s known as the Roche limit of a larger body like the sun or a planet—a distance of about 2.5 times the radius of that body. But the dark asteroids start falling apart at about ten times the solar radius, or about 4.3 million miles from the sun.

“When NEOs reach some critical…distance,” the researchers wrote, “they catastrophically disrupt.”

The investigators built computer models to track the trajectory, size, composition and other features of the asteroids that survive and the ones that don’t and concluded that there may be a few factors at play that take some of the rubble out of circulation. The darker asteroids may contain higher concentrations of volatile elements and compounds, which sublime into gasses as they approach the sun. The material that streams away then acts like a small thruster, causing the asteroid to begin spinning until it tears itself apart.

Dark asteroids, like all dark objects, would also reflect less sunlight—and thus absorb more—than lighter objects. This would lead to heating that could weaken and fracture them. That is especially so, the researchers believe, because while the surface of a dark asteroid approaching the sun might warm up to 1,160° F (626° C), the heat would penetrate to less than a foot (0.3 m) into the body of the rock. That thermal imbalance might also cause it to fracture.

The destruction of an asteroid unfolds quickly once it starts—the researchers call the process “instantaneous disruption”—but what’s instantaneous on a cosmic scale is a bit slower in human terms. An asteroid takes about 250 years to self-destruct once its breakdown begins. Still, Earth has been here for 4.5 billion years and life has been around at least 3.5 billion. That’s a lot of time for a lot of rocks to be taken out of play, giving earthly biology one more small, solar-powered edge in the fight for survival. 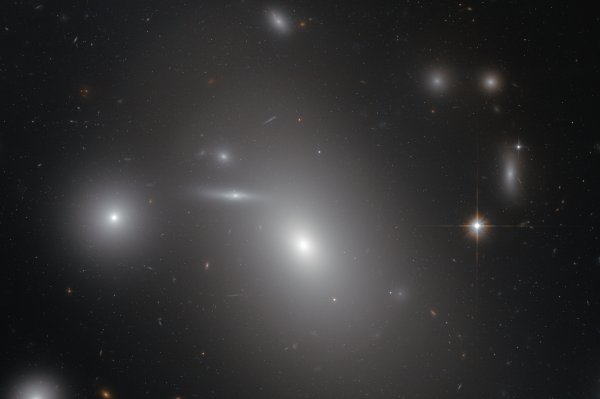 See a Galaxy That's Home to One of the Biggest Black Holes Ever Discovered
Next Up: Editor's Pick