Cruz Closes In on Trump in New National Poll

Texas Senator Ted Cruz is closing in on Donald Trump in the race for the Republican presidential nomination, beating the billionaire by a narrow 2 percentage points in a new national poll.

Although Cruz’s lead in the new NBC News/Wall Street Journal poll is within its 4.9 percentage-point margin of error, the fact that Cruz is this close is notable since Trump has maintained such a strong lead over opponents for several months. The poll has Cruz as the first choice of 28% of Republican primary voters, while Trump is behind with 26%.

There may be good news for Rubio here; as Cruz and Trump continue to tangle in the polls, his stock keeps on growing — some 70% of GOP primary voters could see themselves supporting him and he bests Trump in a head-to-head matchup 57% to 41%.

Trump held a 13-point lead over Cruz last month, but this poll was conducted after Saturday’s GOP debate in South Carolina, where the billionaire was booed several times by the audience. Other national surveys show Trump still in the lead, but the NBC/Wall Street Journal poll appears to be one of the few conducted after the debate.

NBC/Wall Street Journal conducted the poll from Feb. 14 to 16 with input from 800 registered voters, of which 400 were Republican primary voters. 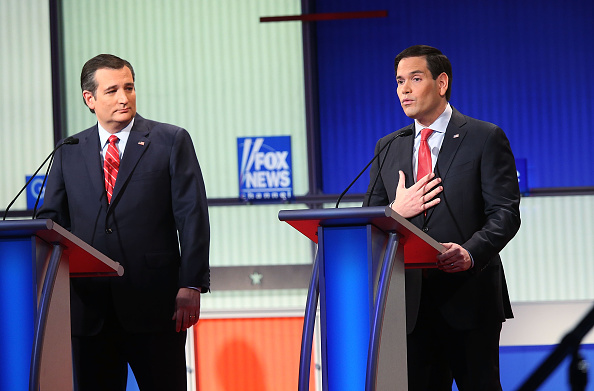 Cruz and Rubio Have Bad Blood in South Carolina
Next Up: Editor's Pick