The Speech Hillary Clinton Should Give to Young Women

Hillary Clinton gives a speech at the Schomburg Center for Research in Black Culture on Feb. 16, 2016, in New York City
Andrew Burton—Getty Images
By Jay Newton-Small

After Hillary Clinton’s epic loss in New Hampshire, it was clear to many that her message needed to change. She couldn’t be the scold, pitching herself in incredulous opposition to all of Bernie Sanders’ hopes and dreams. She needed to be a positive, not a negative. In the days since, she seems to have decided that she stands for Barack Obama’s revolution: If you followed him, follow me for more of the same.

But there is another pivot available to her, one I explored in my book, Broad Influence: How Women Are Changing the Way America Works. In a way she has not yet embraced, Clinton represents another sort of revolution, which might appeal to many of the Democratic voters she has yet to win over.

One of the unsung successes of third-wave feminism is the “quiet revolution” — which, as described by Harvard researcher Claudia Goldin in 2006, is the idea that as women’s participation in the workforce has crept up, the workplace was slowly revolutionized. Women first entered the workforce as Rosie the Riveters during World War II. It wasn’t until 1970 that the last laws banning married women from working without their husband’s permission were finally repealed. And suddenly, before we could blink, women accounted for 47% of the workforce.

Sure, we have a long way to go to parity — especially in middle and senior management — but as women have reached critical mass in the workforce, the quiet revolution isn’t so quiet any more. You have Taylor Swift demanding recognition for being a successful woman, Jennifer Lawrence demanding equal pay, Emma Watson starting a feminist book club and Lena Dunham launching a women’s newsletter — and you have Hillary Clinton running for President.

While writing my book, I taught a weekly seminar at Harvard where I was doing a fellowship at the Institute of Politics. By far the class that generated the most student interest was the class on Hillary Clinton. The mostly young female students were incredulous to learn that women couldn’t wear pants to work before Clinton wore them in the White House in 1993. Clinton was the first activist First Lady, among the first female Senators and first female Secretaries of State. She has been at the vanguard of the quiet revolution for decades.

Sure, she touches on these achievements in her speeches, but she telegraphs them as touchstones, never really explaining them. “I said women’s rights are humans right and human rights are women’s rights in Beijing,” Clinton will sometimes remind audiences. That means a lot to women who remember that 1995 speech; it means little to women born since. And there are a lot more women born since then who swing elections these days. These are not topics she has addressed directly in a major speech.

In recent weeks, Clinton supporters Madeleine Albright and Gloria Steinem have gotten themselves into trouble for hectoring young women to vote to Hillary. And it’s clear Clinton has a problem inspiring young voters. As one 22-year-old Sanders supporter told me in New Hampshire: Bernie rallies are like being swept off one’s feet for the revolution; Clinton’s are like meetings with a financial planner. Hardly inspiring. No wonder 82% of New Hampshire female voters under 30 voted for Sanders.

To win the nomination, Clinton will likely need to do more than just explain to young women why they should vote for her. She has to inspire them. This is an issue about which Clinton is genuinely passionate. Get her started talking about her time at the State Department and her work on women and girls and she gets clearly excited. We are in a world where voters are increasingly looking for authenticity — something Clinton has thus far lacked.

Clinton already has a revolution, she’s just not harnessing it in her public messages. She could explain all of this in personal terms, so young women can put themselves in her shoes — the adversity she faced, how she overcame it and how that turns into policy that differs from Sanders’. She could explain to young women how, thanks to her, they can wear pants to work — as well as all of the other barriers she broke. And she could tell them how she would govern differently than any man. She could inspire them with how she would, if given the opportunity, change the world, not advance incremental policy points left over from someone else’s dream.

Millennials are the first generation born assuming equality of the sexes. Most millennial women assume there will be a female President in their lifetime. What they remain unconvinced about is why that President has to be Clinton. In 2008, Clinton she lost the women’s vote — thanks to young women who went elsewhere — to Barack Obama in 16 contests. This time around, she cannot afford to lose them again.

Clinton often points out that she would be the first female President, but she leaves that point hanging without context to anyone who hasn’t known her for 20 years. All around us, the quiet revolution is bursting into life without Clinton. In the next few months, we will find out if she can harness that energy and explain to young women why this revolution, her revolution, needs them more than ever. 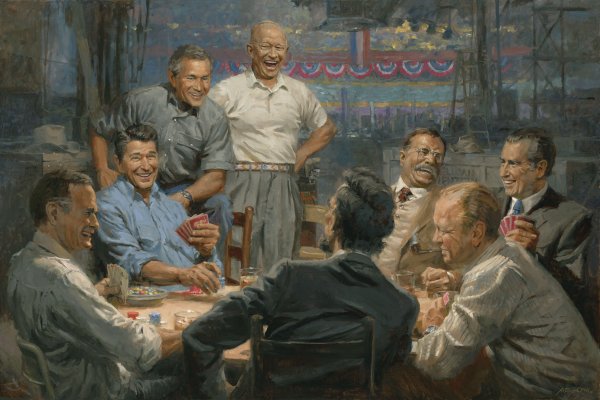 Why This Cowboy Painter Is Watching 2016 Closely
Next Up: Editor's Pick