China Has Sent Missiles to a Contested Island in the South China Sea, Reports Say

China appeared to increase its assertiveness over disputed islands it occupies in the South China Sea — claimed by at least two other countries — after satellite images obtained by Fox News showed a Chinese surface-to-air missile system on one of the islands.

According to photos from ImageSat International, two batteries of eight missile launchers can be seen deployed on Woody Island, Fox News reported.

The island, part of the contested Paracel chain, is also claimed by Taiwan and Vietnam. The missiles are believed to have arrived within the past week, with a previous photo on Feb. 3 reportedly showing an empty beach where they now appear to stand.

A U.S. official confirmed the accuracy of the images to Fox News, saying that they “appear to show” an HQ-9 air-defense system capable of downing aircraft within a 125-mile range.

The deployment of the missiles was also corroborated by Taiwan’s Defense Ministry, with spokesman Major General David Lo confirming their presence to Reuters.

“Interested parties should work together to maintain peace and stability in the South China Sea region and refrain from taking any unilateral measures that would increase tensions,” Lo said.

China claims the majority of the South China Sea as its sovereign territory — an assertion contested by Vietnam, Taiwan, the Philippines, Malaysia and Brunei — and has been on a building spree across many of the islands to consolidate its position. Leaders from several of those countries staking a claim were hosted by President Obama at a summit in California this week, where China’s increasing commandeering of the waters that form a key international trade route was top of the agenda.

U.S. intervention and activity in the region, including a navy destroyer that conducted maneuvers near one of China’s islands in late January, has been slammed by Beijing as a “provocation.” The Chinese government, meanwhile, has countered accusations regarding its own “militarization” on the islands by saying the buildup is necessary for China’s defense. 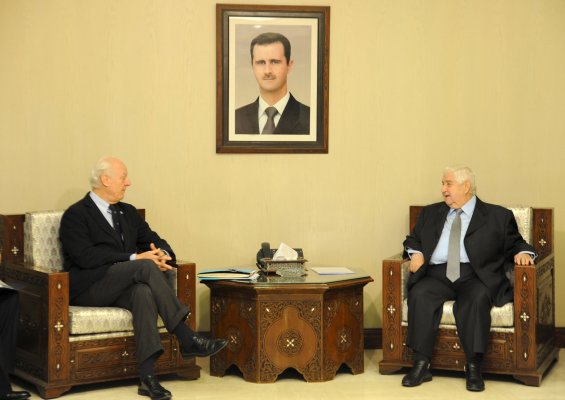 U.N. to Deliver Humanitarian Aid to Besieged Parts of Syria
Next Up: Editor's Pick