Why Pope Francis Is on the Mexican Side of the Border

Pope Francis will celebrate a historic mass at the border between Mexico and the United States Wednesday afternoon. The Holy Father plans to walk to the Rio Grande in Cuidad Juarez, “in earshot of the U.S.-Mexico border,” Catholic bishop Mark Seitz of El Paso told the El Paso Times, and lay flowers and pray “in remembrance of the thousands of migrants who have died in the desert on both sides of the border.”

That visual will likely be one of the most defining of the Pope’s six-day trip to Mexico—and it will likely become a political touchstone for the U.S. presidential campaign.

The Pope’s border mass comes right between the New Hampshire and South Carolina primaries. So far, the border has prompted more aggressive language than substantive discussion on the Republican campaign trail. Donald Trump kicked off his presidential run calling Mexicans “rapists” who bring “crime,” “drugs,” and “lots of problems” into the U.S., and he has repeatedly said he would build a wall along the entire border and make Mexico pay for it. Senator Ted Cruz has followed suit, joking that he’ll hire Trump to build the wall. Former Mexican president Felipe Caldero has weighed in, saying that Mexicans will not pay “any single cent for such a stupid wall.”

Pope Francis is not one to wade explicitly into the details of American politics. His trip to the United States in September made this clear. At his historic address to Congress in Washington—the first time a Pope has ever addressed the nation’s legislative leaders—Pope Francis chose to encourage politicians rather than scold them, to call for unity rather than to point out division. “Each son or daughter of a given country has a mission, a personal and social responsibility,” he said. “Your own responsibility as members of Congress is to enable this country, by your legislative activity, to grow as a nation.”

But the symbolic nature of Francis’ move on Wednesday will be difficult to miss. He makes a habit of drawing attention to symbols of division and oppression, to try to transform them into new points of unity. When he visited Bethlehem, he stopped to pray at the separation barrier between the West Bank and Israel. When he visited the U.S., he made sure to arrive from Cuba, a country that the U.S. had historically shut out until he helped broker their new relationship.

This time, again, Pope Francis’ physical location—celebrating the unity mass at the border, but on the Mexico side—will be a reminder that he approaches political controversies from the underside of power. “He wants to highlight the plight of tens of thousands of Central American refugees—vulnerable families and unaccompanied children—who are fleeing violence in the northern triangle countries of Guatemala, Honduras, and El Salvador,” Seitz wrote of Francis’ goals in an op-ed to the El Paso Times. “In so doing, he may have a tough message for decision-makers in Mexico City, Washington, and Central American capitals who have been responding, at times inhumanely, to this refugee situation.”

And while the Juarez mass itself focuses on local unity—Catholic parishes on both sides of the border received tickets—Francis has made his bigger priorities clear in the past. “We, the people of this continent, are not fearful of foreigners, because most of us were once foreigners,” he reminded Congress in September, with Cruz and Florida Sen. Marco Rubio in attendance. “I say this to you as the son of immigrants, knowing that so many of you are also descended from immigrants.”

Shortly after he finishes the border mass, Pope Francis will board the papal plane for his return flight to Rome. And, if he follows tradition, he will hold an in-flight press conference shortly after takeoff, when the political import of his actions for American politics will still be palpable. Many will be watching how blunt he chooses to be. Most likely, he will follow his own precedent, and encourage, and not scold. As he told Congress, “Building a nation calls us to recognize that we must constantly relate to others, rejecting a mindset of hostility in order to adopt one of reciprocal subsidiarity, in a constant effort to do our best. I am confident that we can do this.” 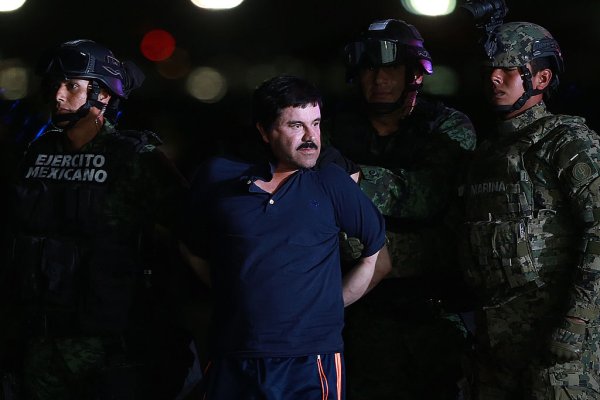 El Chapo Deprived of Sleep in Prison, Lawyer Says
Next Up: Editor's Pick