The bench chair of the late Supreme Court Justice Antonin Scalia was draped with a black wool crepe in his memory on Tuesday, a tradition that dates to 1873. Another black drape hung over the courtroom doors.

Scalia will lie in repose at the Supreme Court on Friday, before his funeral on Saturday at the Basilica of the National

Shrine of the Immaculate Conception in Washington, D.C., NPR reported, citing sources close to the Scalia family. Scalia was a devout Catholic, and the basilica is the largest Catholic church in North America.

It’s also tradition for the other justices to stand on the Supreme Court steps as the casket is brought inside, as they did in 2005 for Chief Justice William Rehnquist, who was carried on the funeral bier first used by Abraham Lincoln.

Scalia, 79, died of a heart attack on Saturday at a resort in West Texas.

Correction: The original version of this story incorrectly referred to the Basilica of the National Shrine of the Immaculate Conception. It is the largest Catholic church in North America. 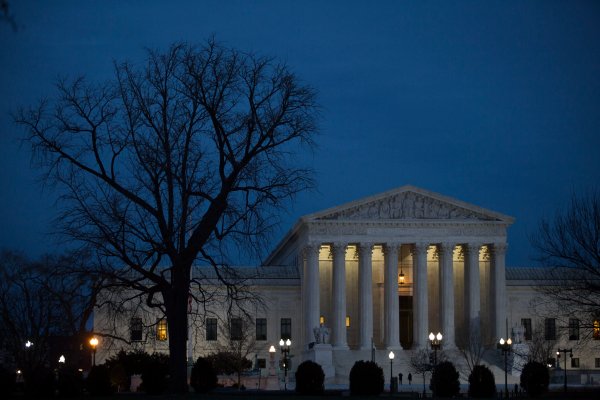 Senate Republicans Should Suck It Up and Help Obama Make an Appointment
Next Up: Editor's Pick