Fighter and Philippines senatorial candidate Manny Pacquiao said he was sorry for homophobic comments he made on television. The eight-time world boxing champion incited outrage when he said, “Gay people are worse than animals” on Filipino television program TV5.

“It’s common sense. Will you see any animals where male is to male and female is to female?” he said. “The animals are better. They know how to distinguish male from female. If we approve [of] male on male, female on female, then man is worse than animals.”

Local gay rights organization Ladlad called on voters to boycott the candidate. And Filipino comedian Vice Ganda used the hashtag #PrayForMannyPacquiao to criticize the boxer’s comments. “The LGBT is a group of people,” Ganda wrote on Twitter to 6.7 million followers. “We are humans. But not animals. Though we’re no saints we will pray for Manny Pacquiao.”

Pacquiao responded to the backlash on his Instagram: “I rather obey the Lord’s command than obeying the desires of the flesh. I’m not condemning anyone, but I’m just telling the truth of what the Bible says. The truth from the Bible is what changed me from my old ways.”

Several hours later, Pacquiao, who currently serves in the Philippines’ House of Representatives, posted an apology first to his Instagram page then to his Twitter account.

“I’m sorry for everyone who got hurt due to my comparison of gay people (homosexuals) to animals. It was my mistake. Please forgive me for those who I’ve hurt,” he said. “But this does not change my position against same sex marriage. That’s what I believe. My only mistake is comparing gay people to animals.”

Neither the state nor the church currently recognizes gay marriage in the Philippines, Asia’s most Catholic country. 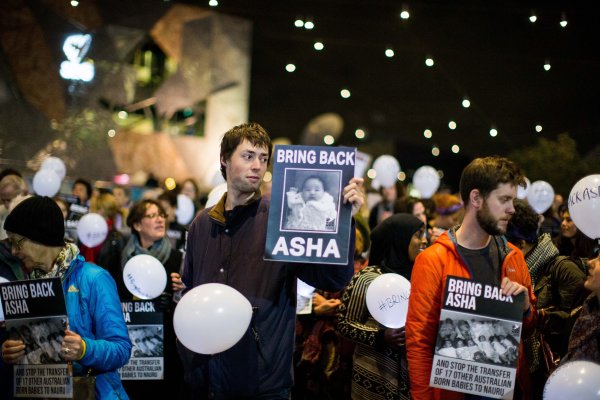 Baby Threatened With Deportation as Australian Hospital Fights to Keep Her
Next Up: Editor's Pick