The saga of Taylor Swift and Kanye West isn’t over yet.

While accepting the award for Album of the Year at the Grammy Awards on Monday, the 1989 singer appeared to fire back at West’s recent claim that he “made [her] famous.”

“I want to say to all the young women out there: there are going to be people along the way who will try to undercut your success, or take credit for your accomplishments or your fame,” Swift said. “But if you just focus on the work and you don’t let those people sidetrack you … you’ll look around and you will know that it was you and the people who love you who put you there, and that will be the greatest feeling in the world.”

One of the most talked-about lines on Kanye West’s just-released new album, The Life of Pablo, is from the song “Famous,” in which he claims his infamous interruption of Swift at the 2009 MTV Video Music Awards helped her career: “I feel like me and Taylor might still have sex / I made that b—- famous.”

The two appeared to have buried the hatchet at last year’s VMAs, where Swift presented West with the Video Vanguard Award, but Swift’s reaction to the song suggests there may still be some bad blood. West says he got Swift’s stamp of approval before releasing the song and that he “did not diss” her; a representative for Swift said that West only asked her to release the song on her Twitter and that Swift advised West against releasing a song with “such a strong misogynistic message.” 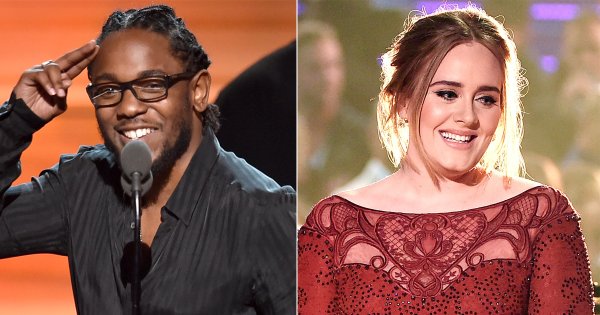 The Best and Worst Moments of the Grammys
Next Up: Editor's Pick