Larry Sanders on Being the Original Bernie Bro: It's 'Incredibly Strange'

Larry Sanders at home in his kitchen in Oxford, England, on Feb. 15, 2016.
Kirsty Wigglesworth—AP
By Oliver Griffin

Bernie Sanders would at 75 be the oldest person elected to the White House if he wins the presidency this November, but his brother Larry — seven years his senior — just got a new job on the frontlines of British politics. Clearly, the Brooklyn-born siblings feel it’s never too late to try out a new role.

The Democratic candidate’s brother, 81, was recently appointed health spokesperson for the Green Party, a small but vocal political movement that has representation in local government across England and Wales, as well as a single member of parliament. It is not affiliated with the U.S. party of the same name.

Larry, an academic with three decades’ experience in healthcare policy, moved to the U.K. in 1969. Originally a member of the U.K’s Labour Party, he switched to the Greens during the leadership of former British Prime Minister, Tony Blair. Still a U.S. citizen, Larry has already said he’ll vote for his brother in November.

TIME spoke briefly with Sanders the elder about healthcare policy in the U.K. vs the U.S., why it feels “incredibly strange” to be caught up in his brother’s political movement — and why he isn’t convinced the phenomenon of the “Bernie bro” really exists:

TIME: Congratulations on your new job. How are you finding it?
Sanders: I’ve only had one outing so far, a phone interview with a radio station. Apparently I was feisty. They wanted to tell me that the problem with the National Health Service (NHS) is immigration, which is not the case. A third of the workers in the NHS are immigrants and in terms of economics the country does very well out of immigrants, because they tend to be young, healthy and fewer dependents.

Many Brits think the NHS is underfunded and mismanaged. How would the Greens improve it?
It’s a constant battle. When you get a proper health service, publicly funded and organized on good principles for everyone to benefit, that’s not the end of the battle. It’s a constant struggle and funding is one part of it. There are people in [current ruling party] the Conservatives who would love to see money flow into private hands. The Green Party is committed to ending privatization and funding it properly.

Would nationalized healthcare work in the U.S?
A national healthcare system would work. At present, the American system costs more than twice as much as most other industrial countries and the results are not terribly good. It’s high in child death and, on average, people in America live less than people in countries with a different health system. It’s not the only reason people are dying – general inequality is an important factor – but it’s part of it.

You said the Green Party has similar politics to your brother, Bernie. How?
I shouldn’t have said that, really. It was a bit of an overstatement on my part. But yes, there are many important areas in which they are similar. Firstly there are inequality and the related issue of austerity politics. That is something Bernard and the Green Party are very similar on. The second is climate change. Bernard might even be slightly ahead of the Green Party on that.

Do you think your brother would achieve more success in the U.K?
(Chuckles) It’s hard to know because he is not running in the U.K. but I am astonished by the amount of enthusiasm for him here.

How do you account for his popularity?
I think this is not a terribly easy time almost anywhere, politically. Bernard stands out compared to people like Mr. Trump because, in addition to his policies, he is an extremely decent person. People realize that the United States plays such a leading role in the world and there hasn’t been sufficient leadership from the U.S. on inequality. Bernard comes across as someone different.

How are you finding the Democratic race so far?
It’s intensely exciting, there’s a sense of ups and downs, of rollercoasters, and so on. I have enormous pride in what Bernard is accomplishing, in getting his message across.

Do you think it’s getting more personal?
It does sound like it’s getting more intense, yes. The thing with elections is that when they get closer and tighter and coming to crucial points, people get more involved. I think both of the candidates are good competitors. I don’t think either of them go in for doing dreadful things but, obviously, passions on both sides are going to increase.

Does the ‘Bernie Bro’ phenomenon make it harder for Bernie to win?
I haven’t been completely convinced by this idea. I’ve been reading comments that get put under stories during the campaign and there are just such a lot of angry people. I don’t think it’s a phenomenon just among Bernard’s supporters. However, I think from the beginning to the end of Bernard’s career, it’s not something that he has liked.

What memories do you have growing up together in Brooklyn?
The growing up on the street stuff that Bernard has been talking about recently was really very good. It was a very safe road, we were out there all the time playing. Life at home was good in a very deep sense, we were very secure and we were very well loved in a close family, but there was a negative. There was continual feeling of economic insecurity. We weren’t poor and we didn’t lack anything of importance but our parents argued about money. They argued about money, not because they didn’t get on, but because it was such a constant pressure.

Did you and Bernie talk about politics growing up?
Partisan politics – what you would do if you were running for office – we certainly didn’t do, because we never imagined either of us would be running. I studied politics and economics at Brooklyn College – Bernard must have been about 11 then – and if I heard something I thought he’d be interested in, I would mention it to him. We were discussing political ideas, but not about getting elected or that sort of thing.

What’s it like to be the original Bernie Bro?
(Laughs) It’s incredibly strange. I went to a lecture the other day on social care, which is an issue I work on a lot. At the end of the lecture I asked a question and the chairman asked me who I was. I told him my name and half of the audience clapped. That’s the first time that’s happened in 30 or 40 years. There is a reflected glory that I’m experiencing and – mostly – enjoying.

This interview has been lightly edited for brevity and clarity

Write to Oliver Griffin at o-griffin@live.co.uk. 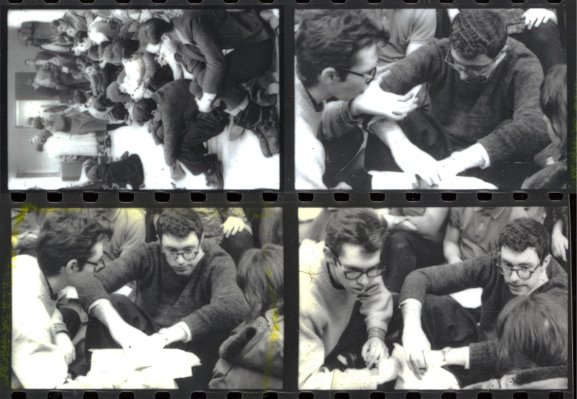