How Hard Is Too Hard to Push Kids?

Success Academy is a charter school network that operates 34 free schools in New York City, serving 11,000 students. Sometime in 2014, a teacher in one of its Brooklyn schools was secretly filmed ripping up a first grader’s work, shouting at her and sending her to the “calm-down chair,” because the child could not read her math sheet aloud. The New York Times put the film online on Feb. 13, prompting comments from thousands of people, many of whom need a spell in the calm-down chair.

“That’s the kind of moment a kid will remember into old age. Why would a student take another learning risk again? Or anyone who witnessed that?” wrote one respondent. Others didn’t see the big deal: “Get a grip, people. Stop coddling children. It’s a tough world out there. My husband’s first grade teacher barked at him, ‘Do you have sawdust for brains!’ Yes, he was hurt. But he got over it and became an engineer.”

The actions of one teacher in one class in a school system that educates more than million students every day would not seem to be worth such scrutiny, except that it hits one of our most sensitive parental nerves, the one connected to the fear reflex. This triggers the alarm, common to many parents, that we may not be taking the right steps to make sure our kids amount to something.

How hard do kids have to be pushed? Is it worth being a little harsh if it means the kid achieves something amazing? Or should we let kids find their natural level and activities they love enough to keep doing without our nagging at them?

We see these fears reflected in the brouhaha over such books as The Battle Hymn of Tiger Mother, where the tigress in question, Yale professor Amy Chua, bans playdates because her daughters should be rehearsing or working. We see it in movies like Whiplash, where a music teacher uses every trick in the book — and many that are in no books at all — to push his students to mastery in jazz. We see it in the biographies of high-achievers like Andre Agassi (heavily pushed) and Steve Jobs (merely encouraged).

The questions are an obsession in particular in any society where a significant gap exists between those who have success and wealth and access to good educational and medical services, and those who don’t, like America right now. How do we keep our kids in the first category?

Nobody would ever argue the video displayed that teacher’s finest hour, but she’s there, swinging away, trying to get the kids to strain for something a bit higher and more rigorous. Kids need teachers with her passion (plus, maybe, a little more impulse control). But is misdirected passion worse than teaching by the books?

What we can’t tell from this short video is how the kid reacted. We know she went to the chair without hesitation, but we don’t know if this event will be one that hampers her for the rest of her life. The writer Lionel Shriver (We Need to Talk About Kevin) says that her most inspiring teacher terrified her. “We sat at our desks pin-drop silent, and even the slackers had always done their homework,” she wrote of a former history teacher. On the other hand, Oprah’s beloved fourth-grade teacher, who made the media queen want to be fourth-grade teacher, seems like the gentlest soul in the world. (In fact, in a survey of 641 new public-school teachers, two-thirds of them cited having “a teacher who really inspired them as a student” as one of the main reasons they went into the profession.)

For some kids, that teacher’s rant would be a huge setback. For others, merely a hiccup. It’s impossible to tell from the video which category this child falls into. But even the Tiger Mom discovered the limits of ceaseless pushing. One kid responded and played piano at Carnegie Hall. The other one gave up the violin and discovered tennis on her own. Who’s to say which is right? 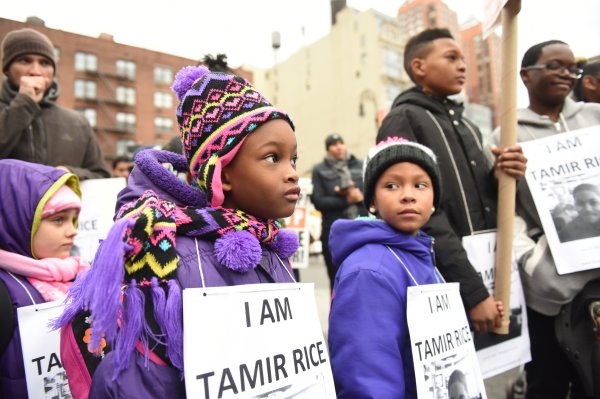 How to Teach Your kids to Stand Up for What They Believe In
Next Up: Editor's Pick