Marco Rubio’s play for South Carolina’s religious conservatives is anything but subtle.

His events here start with prayer and his soundtrack is heavy on Christian rock. The first-term Senator from Florida tells audiences that members of his family are living paycheck-to-paycheck so they can send their children to “faith-based schools.” His backers promise that Rubio would never utter profanity the way Donald Trump does. And, when asked if he can win South Carolina, Rubio simply says it is up to God.

“God is in control of everything. God has a will for my life and for your life, and for everyone else’s life. Sometimes God’s will is not our will, and we should be grateful for that because he knows a lot more than we do about what is best for us,” Rubio said Sunday in a packed high school auditorium, with 2,000 more supporters listening to audio piped into overflow rooms. “So what I think what we are called to do is to be faithful and do the best we can in every circumstance and pray for God’s peace.”

Rubio continued in a tone that seemed more compatible with a pulpit than a political rally. “Here is what I am at peace with: Whatever happens next, God will either give me the ability to get around it, or the strength to go through it. I think that is also true for our country,” Rubio said.

“He has blessed me with four incredible children, and a loving and godly wife,” he went on. In case anyone missed the exchange, the campaign sent along a transcript and video of the moment of Brother Marco’s brief evangelism.

The in-your-face faith might just be a winning strategy. Two-thirds of South Carolina residents say they pray daily and half say they read the Bible at least once a week. In 2012’s primary, 65% of Republicans said they were Evangelicals or born-again Christians. It’s tough to win in South Carolina with only a cursory nod to faith; the faithful want one of their own to win, and South Carolina demands public professions of faith. Rubio is obviously ready to stand in the public square with his creed.

Rubio is a practicing Catholic, but at various points in his life he has been a Mormon and attended a Southern Baptist-affiliated mega-church at home in Florida. He often mentioned his faith in Iowa, and that helped him place a better-than-expected third place before stumbling in secular New Hampshire.

Now that the campaign is heading toward a final push in South Carolina, Rubio is back to pushing his faith. He plans to be in South Carolina every day before Saturday’s primary. “We are all-in,” one of his top advisers said. The campaign once suggested they were playing for a win here, but now they’re trying to calibrate those expectations. (The same strategy called for them to come in second in New Hampshire, where he placed fifth. “Some things have obviously changed,” the same adviser says dryly.)

Rubio’s pitch has plenty of explicit promises, but he’s also crafty dropping in shorthand. For instance, during Saturday night’s debate, he criticized the Supreme Court’s ruling that expanded the right to marriage to same-sex couples. It was done in a way that most viewers at home might have missed it, but the religious voters who disagree with the Court heard what they needed.

“Justice Scalia understood that better than anyone in the history of this republic. His dissent, for example, on the independent counsel case is a brilliant piece of jurist work. And, of course, his dissent on Obergefell as well,” Rubio said. The official name of the marriage case was Obergefell v. Hodges. For the uninitiated, the citation went right past.

Rubio’s pathway to the presidency via preaching is a tough one, to be sure. Rival Ted Cruz is the son of a pastor and he has made his faith a central part of his campaign, which launched at the Jerry Falwell-founded Liberty University. Cruz’s father, Rafael, is a rock star in some church circles, and the son certainly enjoys some of the halo effect. Last week, Cruz made clear he wasn’t ceding any ground to Rubio, saying he could not be trusted on marriage because he at one point said same-sex unions were the law of the land. “Those are the talking points of Barack Obama,” Cruz said of Rubio’s rhetoric.

Rubio and his team are ready to fight back, reminding voters of Cruz’s admittedly shady tactics in Iowa, where Cruz’s aides told caucusgoers that Ben Carson seemed to be ending his campaign. Such a move undercuts Cruz’s character, and Rubio’s team is eager to keep that at the fore.

Take Trey Gowdy, the South Carolina Congressman who is advising Rubio. Before Rubio took the stage Sunday, Gowdy did a one-two punch against the foul-mouthed Donald Trump and the dodgy caucus strategy from Cruz.

“If you’re a parent, you will not have to put your hands over your kids’ ears a single time today,” Gowdy said to applause. “Nor will you have to explain the difference between dropping out of a caucus and picking up dry cleaning. You will not have to do that.” 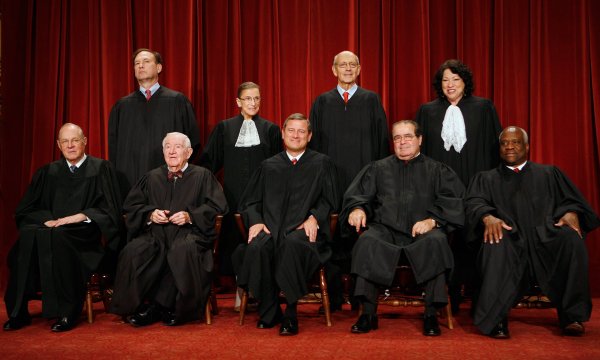 Ruth Bader Ginsburg: Scalia and I Were 'Best Buddies'
Next Up: Editor's Pick