Watch the Republican Debate Moments That Got Social Media Talking

Donald Trump stole the show at the Republican debate, once again—at least based on social media data.

Twitter users gravitated toward moments when Trump argued with the other candidates at Saturday’s debate in South Carolina—like when he lambasted Texas Sen. Ted Cruz on his conservative credentials or when Trump got into an early argument with former Florida Gov. Jeb Bush on his family’s national security legacy.

Trump garnered some 40% of conversation among Twitter users, compared to 20% for Bush. But criticisms of Bush fell flat on the audience in South Carolina, who audibly booed Trump several times throughout the night. Google searches in the Palmetto State, however, appeared favorable for Trump and Cruz.

In particular, an exchange between Cruz and Florida Sen. Marco Rubio caught viewer attention as searches for “amnesty plan” spiked some 2500% afterwards.

Before the debate Americans were searching for information about the death of Supreme Court Justice Antonin Scalia. Top questions included “What happens when a Supreme Court justice passes away?” and “Will Pres. Obama appoint Justice Scalia replacement?”

Republicans are gearing up for the upcoming South Carolina primary, after a victory for Trump in New Hampshire.

Watch video of the top moments from the debate above. 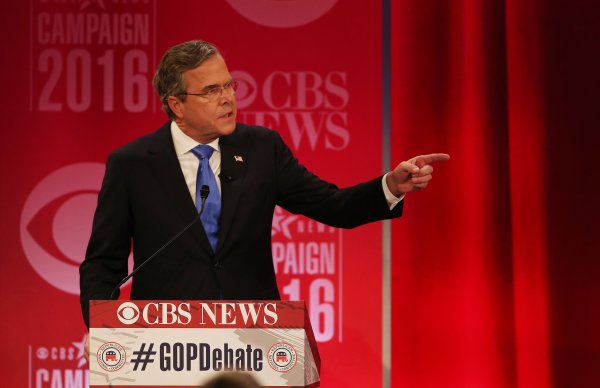 How George W. Bush Returned to the Debate Stage
Next Up: Editor's Pick