Mother of Columbine Shooter: 'I Am So Sorry for What My Son Did'

Sue Klebold, mother of Columbine shooter Dylan Klebold, spoke out about the guilt she still lives with over her son’s deadly attack in an emotional interview with Diane Sawyer Friday night.

“I am so sorry for what my son did, yet I know that just saying that I’m sorry is so inadequate,” Klebold, 66, said on 20/20. “There’s not a day that goes by that I don’t feel bad about the kids that he harmed.”

“It’s very hard to live with the fact that someone you loved and raised has brutally killed people in such a horrific way. In his last moments he was hateful and cruel.”

Dylan, along with fellow student Eric Harris, opened fire at Columbine High School in Colorado 17 years ago, killing 12 students and one teacher, and injuring 24 others before taking their own lives.

“I remember thinking if this is true, if Dylan is really hurting people, somehow he has to be stopped, and at that moment I prayed, I hope he would die,” Klebold said of the moment she heard about the shooting.

Klebold said that, as a mother, she never would have predicted that Dylan could have planned such a massacre.

She only learned later the full scope of Dylan and Harris’ planning, which included 99 homemade explosive devices. Klebold also found out that Dylan had kept a journal detailing his suicidal thoughts, and that he and Harris had recorded a video just before the attack, where Dylan addressed his mom, saying, “I just want to apologize for any crap this might bring. I’m going to a better place.” The tapes have reportedly been destroyed.

This all painted his last few months in a different light.

“Sometimes he would seem distant and quiet, and I would let it go. If it was me today, I would dig and dig and dig. I had all these illusions that everything was okay,” said Klebold.

She continued: “Part of the shock of this was learning that how I lived and parented was an invention in my own mind. If I had recognized that Dylan was experiencing some real mental distress, he would not have been there, he would’ve gotten help. I don’t ever for a moment mean to imply that I’m not conscious of the fact that he was a killer. Because I am.”

Klebold’s book about her experience, A Mother’s Reckoning: Living in the Aftermath of Tragedy, comes out Monday, with all profits going to research and charities focused on mental health.

Klebold hopes that through the book and the 20/20 interview, more of the victims and their families will be willing to speak with her.

“I don’t want to impose myself to do that, because it has to be about them and their healing and what they need,” she said.

But for now, she’s working on letting go of some of the intense guilt she feels towards the victims and their families any way she can, including visiting the memorial just outside the school grounds.

“I feel kind of unwelcome there, of course, and perhaps I’m intruding,” she said.

“Sometimes I just sit there and think. And I tell them I’m sorry.” 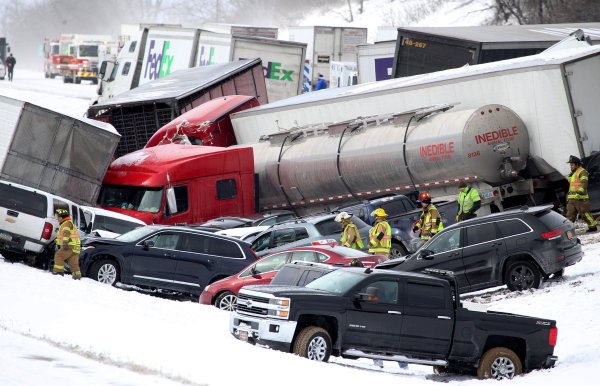 50 Car Pileup Shuts Down Penn. Interstate
Next Up: Editor's Pick