Why the Syrian Ceasefire Will Not Stop Russia's Bombing Campaign

Over the past week, while the United Nations was preparing for another round of talks to end the civil war in Syria, desperate pleas came pouring into the U.N. offices from all over the world. “We were flooded, flooded with messages from the Syrian people,” said Staffan de Mistura, the U.N. envoy in charge of mediating the talks. “They were coming from all over, inside and outside Syria.”

They were mostly asking for two things: They wanted food and medicine to reach besieged cities and towns and, no less critically, for the air strikes against these cities to stop. “We need no more bombs, no more war,” de Mistura said in recounting the messages.

But the deal reached on Friday in Munich will likely disappoint such petitioners. While the talks did result in a hopeful pledge for the “nationwide cessation of hostilities” within one week, the agreement will not impede Russian bombs from continuing to pummel Syrian cities. Nor will it resolve the core disagreements between the U.S. and Russia over how to end the civil war.

Early on Friday morning, when U.S. Secretary of State John Kerry announced the deal, the gulf between him and his Russian counterpart, Foreign Minister Sergei Lavrov, appeared to be as wide as ever.

Take, for instance, the Russian and U.S. positions on the siege of Aleppo, once Syria’s largest city, which has been under rebel control for four years. In his opening remarks, Kerry denounced the government’s recent offensive against this and other rebel-held towns as “violating international law by trying to force surrender through starvation.” With the aid of Russian airstrikes, Kerry said, the Syrian regime has been killing civilians, forcing more than 60,000 Syrians to flee their homes in the past week or so.

That is not how Lavrov sees it. When his turn came at the microphone, he took a swipe at Kerry for even referring to the siege of Aleppo as an act of aggression. “If the liberation of a city from illegal armed formations can be called aggression, well, maybe,” Lavrov said. “But to go on the offensive against those who have conquered your land is necessary.”

As for the people fleeing Aleppo for refugee camps near the Turkish border, Lavrov suggested that these were rebel fighters, too. “According to our information,” the Russian minister said, “those who are running away from this area are militants who are trying to save themselves.”

This left little room to doubt Russia’s intention to keep bombing Aleppo until the Syrian government regains control. From the U.S. perspective, that victory for the Assad regime would not only create another wave of refugees; it would also mark a dangerous turn in the war. “The more successful Assad is in securing territory against the opposition, the more successful he is in creating more terrorists who threaten the region,” Kerry said at the briefing in Munich.

On this point, too, the U.S. and Russia couldn’t be further apart. Even before its military intervention in Syria last fall, Moscow insisted that Assad’s government is the only legitimate power in Syria, and it has tried to avoid discussing the atrocities his regime has committed against the Syrian people. That did not change after the latest round of talks.

At one point in the briefing, Lavrov was asked to respond to the reports that Assad’s forces are slaughtering civilians with Russia’s help. One such report from Amnesty International even claimed in December that the Russian air strikes could amount to war crimes, as they “appear to have directly attacked civilians.” But Lavrov sidestepped the question, saying he had not seen the report. “So I can’t say if they’re lying or not,” he said.

This type of selective vision has been a hallmark of Russia’s strategy in Syria from the beginning of its intervention. Wherever Russian bombs have fallen, Russian officials have tended to see the terrorists of the so-called Islamic State of Iraq and Greater Syria (ISIS), even when the targeted areas have long been under the control of more moderate rebel groups. Aleppo is only the latest example. “Today we talked a lot about Aleppo,” Lavrov said on Friday. “There were a lot of accusations directed at us, and I don’t want to repeat them. We hear them every day.”

And none of them seem to make a difference in Russia’s conduct of this war. Over the coming week, the agreement reached in Munich may at least help food and medicine reach the towns in Syria where it is most urgently needed. All parties to the negotiations agreed to facilitate the delivery of that aid. But Russia has not moved an inch in its support for the Syrian government. So its bombs will likely continue to fall until, in Lavrov’s words, Assad “liberates” the cities that oppose him. 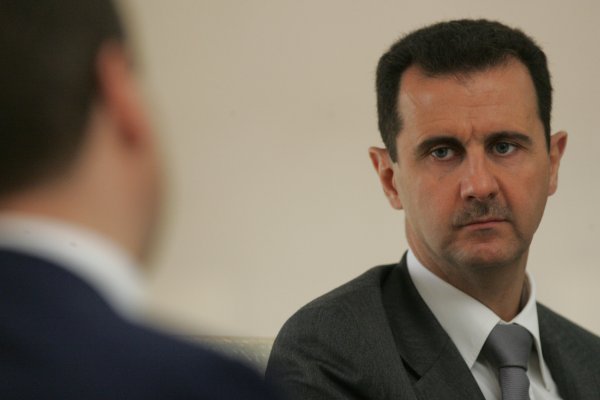