Inside One of the Last Nazi Death Camp Trials

Reinhold Hanning, a 94-year-old former guard at Auschwitz, arrives in the courtroom before his trial in Detmold, Germany, on Feb. 12, 2016.
Bernd Thissen—Reuters
By Eliza Gray/Detmold, Germany

On the second day of the trial of Reinhold Hanning, a 94-year-old former guard in the Nazi SS who has been accused of serving in Auschwitz, survivors described in detail to the court the terror they experienced living in the death camp. As an alleged cog in the Auschwitz machine, Hanning is charged with accessory to murder in at least 170,000 deaths. His case has garnered international attention, not just because it is almost surely one of the last Nazi trials—Hanning is one of the few former Nazis still alive—but because it represents a new prosecutorial strategy that seeks to widen the circle of responsibility for the Holocaust.

“The very new approach in this indictment is to see Auschwitz as an extermination camp that not only murdered people [selected to be gassed] but also murdered others through hunger and random executions,” said Dr. Cornelius Nestler, one of the attorneys representing the survivors. He said the testimony in the trial so far by three witnesses who were at Auschwitz has been designed to show that Auschwitz in itself was a killing factory, and that therefore anyone who helped run it, even if they were not gassing Jews themselves, is criminally guilty.

Until recently, prosecutors had to prove that an accused Nazi was responsible for killing an individual victim in order to get a conviction—a high bar to clear. That changed with the 2009 trial of a former Nazi guard at Sobibor death camp, John Demjanjuk. The 79-year-old was convicted and sentenced to five years in prison. That trial set a new precedent that staff at one of the six death camps could be tried with accessory to murder, even if they did not directly kill anyone or participate in gassing, because their work helped make the killing possible.

Since the Demjanjuk trial, German prosecutors have been building cases against the few remaining former SS soldiers who served at the death camps, and last year they won a conviction against Oskar Gröning, known as “the bookkeeper of Auschwitz,” who was in charge of processing the belongings of the Jews killed at the death camps. He was sentenced to four years in prison, but he has not served any time. Gröning’s case is now on appeal, on the grounds that he played a minor role at Auschwitz.

Read More: Why Germany Will House Refugees at a Nazi Memorial Site

Using a similar argument, the trial of Reinhold Hanning began on Thursday at a courthouse in the town of Detmold in northern Germany. Hanning is accused of serving as a guard at Auschwitz from January 1943 to June 1944, a period of time during which he would have allegedly guarded Jews during the “selections,” when inmates brought into the camp were separated for work or to be killed in the gas chambers. When Jews arrived on transport trains during the period when Hanning served, less than 25 percent were chosen to work, while the rest were sent immediately to be killed.

The witnesses who spoke during the first two days of of the trial were among those selected for work, but they described how the SS systematically made “selections” every few weeks, inspecting the prisoners naked to see if they had become too sick for work. Those whose weakness made it difficult to walk, said one witness on Friday, were referred to by the SS as the “walking dead.”

Two of the witnesses, Erna de Vries, 93 and Justin Sonder, 90, described the terror they felt over the possibility of being chosen. Sonder, who testified that he survived 17 selections while he was a laborer at Auschwitz, described the experience this way: “Every four or five weeks, the lower ranked SS men shouted “selection” into the barracks and you had to undress completely. All of these naked men stood there and thought, ‘Am I going to make it just one more time or will I be dead in the next four hours?’ If you know in the next few hours you’ll be dead, it makes you crazy.”

Read More: How the Last Surviving Nazis Could Be Brought to Justice

De Vries had her own version of a similar story. She suffered from sores because of the lack of hygiene—there was no soap or towels—that made walking difficult, so she feared being taken away at the selections. “If you had trouble walking at Auschwitz, you were doomed,” she said. Ultimately she was spared, along with a group of women who were half Jewish.

Part of the value of their testimony was to demonstrate that even guards who didn’t work directly in the gas chambers must have known what was happening in the camps, according to Nestler. “Their testimony shows how prisoners were getting thinner and sicker every day. All of this testimony is proof that this approach to prosecuting guards at Auschwitz is the right approach in historical and legal context. The guards had to guard all of this.”

Nearly 200 people attended the opening days of the trial, mostly Auschwitz survivors from around the world and their families, waiting in a long line in the damp February cold. Hanning, dressed in a tweed jacket and yellow sweater, entered the courtroom slowly, with his chin pressed on to his chest, avoiding eye contact with the flashing cameras. The trial began with a reading of the indictment against Hanning and a short account of his personal details. He was born on Dec. 28 1921 in Helpup, Germany and worked in a bicycle factory before joining the German army in 1942. According to the indictment, that same year, he was assigned to Auschwitz. After the war, he spent time a prisoner of war in Britain before returning to Germany.

In her introductory statements, Judge Anke Grudda, head of the five-judge panel, reminded the courtroom that the trial was about Hanning and what he might have done, not the larger crime of the Holocaust. “Due to the historical significance of this occasion, there is interest from the press, but we must not forget that this is about the individual guilt of the defendant.”

Yet for the Holocaust survivors and witnesses, the trial is clearly about more than that. The first witness on Thursday was Leon Schwarzbaum, a 94-year-old widowed antiques dealer from Berlin, who was sent to Auschwitz as a young man, and initially spared from the death chambers because he was a fast runner and able messenger.

Impeccably dressed in a perfectly tailored navy suit—a striking contrast to the dejected Hanning—Schwarzbaum looked distinguished and strong as he delivered his written statement. According to his testimony, he watched the murder of a 17-year-old girl with “very red hair” right next to him. Thirty five members of his family were killed at Auschwitz.

After his statement, Schwarzbaum turned towards Hanning, his voice rising with emotion. “I want to know why millions of Jews were killed and here we both are. Soon we will both stand in front of the highest judge—tell everyone here what happened, the way I’ve done just now!” Hanning said nothing in response, and kept his eyes averted.

But Schwarzbaum may get his wish. On Friday, Hanning’s attorney surprised the court by announcing that the accused—who has so far only communicated through his lawyers—would like to address the witnesses during a future court date to be announced in advance. An apology is what many of his victims will want, even more than the conviction and imprisonment of a 94-year-old man. During Oscar Gröning’s trial last year, he began with an apology, saying in court that he “shared morally” in the guilt of Auschwitz.

But TIME was unable to get any reflections from him on a visit earlier this week to Gröning’s home in Schneverdingen, an middle-class suburb of Hamburg. Gröning lives in a small, neat white house, decorated with well-cared for plants. A little sign in the shape of a dachshund on the front of the house states his family name. He walked to the door to answer a knock, but when TIME asked for an interview, he merely said “nein“—no.

The testimony from Hanning, should he choose to speak, may be no more satisfying, says Nestler, the attorney representing the survivors. “In these trials, listening to the plaintiffs, the defendants feel they must say something. Maybe he will say he had nothing to do with it.” 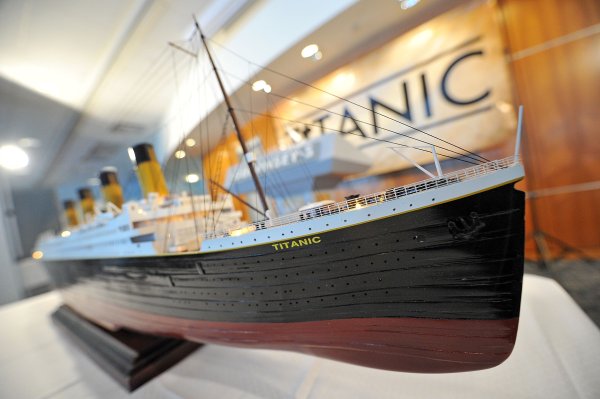 Replica of the Titanic Will Set Sail in 2018
Next Up: Editor's Pick