Democratic candidates Hillary Clinton and Bernie Sanders strongly disagreed at Thursday’s debate on a recent Obama Administration policy that called for the deportation of children arriving in the United States from conflict-ridden Central American countries.

Asked during Thursday’s presidential debate about their stance on undocumented immigrants in the U.S., both candidates advocated for comprehensive immigration reform and a path to citizenship, but Sanders questioned Clinton’s record on the issue.

“Secretary Clinton, I do have a disagreement here,” Sanders said. “If my memory is correct, I think when we saw children coming from these horrendous, horrendously violent areas of Honduras and neighboring countries, people who are fleeing drug violence and cartel violence, I thought it was a good idea to allow those children to stay in this country. That was not, as I understand it, the Secretary’s position.”

Clinton defended the policy, arguing it was necessary to send a message to discourage other families from sending their children on a dangerous journey. She highlighted her opposition to deportation raids and her calls to end family detention.

“Our message absolutely is don’t send your children unaccompanied, on trains or through a bunch of smugglers,” President Obama said in a June 2014 interview with ABC News, adding that there was no way to track how many children died or were trafficked during the journey. “If they do make it, they’ll get sent back. More importantly, they may not make it,” he said. The policy drew criticism from immigration activists.

At the time, the White House called the situation a “humanitarian crisis.” The Department of Homeland Security said more than 52,000 unaccompanied minors had been detained along the U.S. border with Mexico during that fiscal year, ABC News reported, a number that had more than doubled compared to the previous year.

In a 2014 interview on CNN, Clinton agreed that children from violence-ridden Central American countries should be sent back “as soon as it can be determined who responsible adults in their families are,” and she said all children should be reunited with their families. “We don’t want to send a message that is contrary to our laws or will encourage more children to make that dangerous journey,” she said in the interview.

Obama later approved a plan allowing children from those countries to apply for refugee status in the United States, according to the New York Times.

During Thursday’s debate, Sanders said the children should have been welcomed into the country and not used to send a message, but Clinton disagreed.

“The fact is that there was a great effort made by the Obama Administration and others to really send a clear message, because we knew that so many of these children were being abused, being treated terribly while they tried to get to our border,” Clinton said.

“So we have a disagreement on this. I think now what I’ve called for is counsel for every child so that no child has to face any kind of process without someone who speaks and advocates for that child, so that the right decision hopefully can be made.” 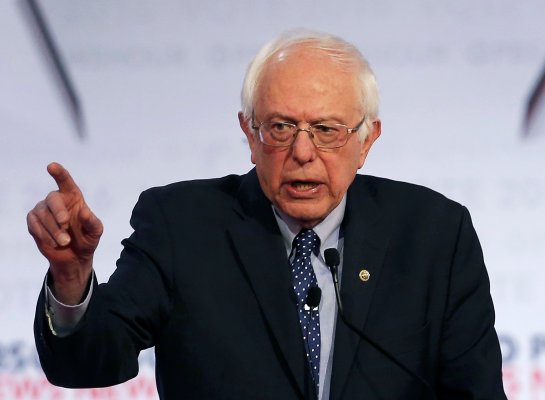 Sanders Snarks as Democratic Debate Gets Heated
Next Up: Editor's Pick