There Were More Tweets About Kanye West Than the Democratic Debate

West hosted a promotional event for his album The Life of Pablo that hogged Twitter feeds earlier in the day, pushing the Democratic debate to a lower share.

Twitter users using the hashtag #DemDebate sent out some 483,180 tweets while users talking about Kanye and his #YeezySeason3 show at New York City’s Madison Square Garden tweeted nearly 900,000 times during the day, according to Twitter data compiled by Spredfast. A live stream of West’s show was so popular, according to host platform Tidal, that it was slow for the reported 20 million viewers who tuned in on their computers.

Other social-media data reveals that candidates Hillary Clinton and Bernie Sanders split the share of the night’s mentions on Twitter, while Sanders edged Clinton in the conversation on Facebook, 57% to 43%.

Facebook also released data on the unique number of people talking about each candidate in South Carolina, the next early-voting state to have its Democratic primary, where Clinton was discussed by more people than Sanders over the past week. Some 111,000 people had 419,300 interactions in the state on Facebook regarding Clinton, while 89,700 people interacted about Sanders 334,300 times.

Tweets about the Democrats did fare better than those of ABC’s Thank God It’s Thursday lineup, which includes Grey’s Anatomy, Scandal and How to Get Away With Murder, according to Spredfast. The data tracks the number of times each trend was tweeted from noon Thursday to the end of the debate. 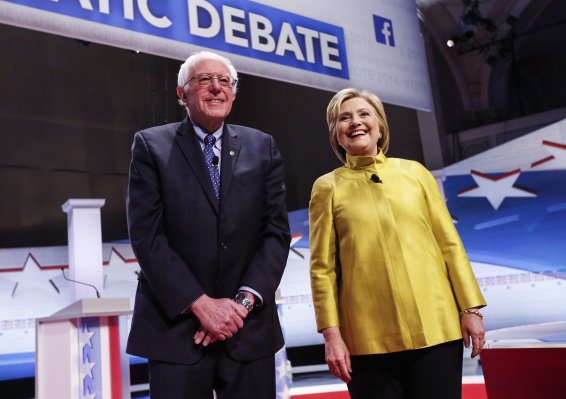 Democratic Debate Focuses on Obama
Next Up: Editor's Pick