How 'Textual Chemistry' Is Changing Dating

My friend and I had just seen a play and, like everyone else in the theater, I took out my phone as the curtain came down. Waiting for me were five lengthy text messages from a guy I had been seeing for two months.

“Oh my God, he’s so desperate,” my friend said when she saw my screen.

“This is totally normal for us,” I explained. “See?” I scrolled up to show her my seven unanswered text messages before, his three blocks of text before that and so on. My friend, who lived strictly by the rule that you should not double text for fear of looking too “thirsty,” as the kids call it, was aghast. “It’s kind of wonderful,” I said.

My now-boyfriend has been teased for “texting like a girl,” but it was immediately one of my favorite things about him. I am an effusive texter, and in past relationships I would get frustrated when my multi-text theses would be answered with “yeah” or “sure.” I needed someone who was just as willing to give themselves carpal tunnel as I was.

I’d heard similar complaints from friends: potential dates who texted too much, too little; used too many emojis, didn’t seem to understand emojis at all; were too serious, used to many “lols” when they clearly were not laughing out loud. Each text was carefully analyzed for hidden meaning. It’s no wonder, then, that text message miscommunications were a daily source of stress and anxiety. It was yet another box to check as we sought a significant other: textual chemistry.

These discussions aren’t all that different from those of generations past: pick up lines have always been picked apart and the art of the voicemail analyzed by singles long before the advent of texting. And many of the old, gendered traditions of who reaches out to whom and when have (for better or worse) persisted.

But unlike the phone call, which has been around for decades, texting and messaging are new enough that no one can agree on what the hard and fast rules are, which means a typo might doom a future relationship. A winky face may be creepy to one person and friendly to another. Long texts can demonstrate care or reek of desperation. That’s why 58% of singles think texting makes dating more ambiguous, according to a recent study from online dating sites Christian Mingle and JDate.

MORE: Why Bumble Wants to Beat Tinder at Its Own Game

And yet the importance of texting grows with each passing Valentine’s Day. As more and more couples meet online or through dating apps, texting has become not only a means of seduction, but also the foundation upon which a future might be built. Whether a witty repartee is established in those first few messages on Tinder or Bumble could be the first step to a lasting relationship.

And the problems persist among long-term couples for whom texting and emailing have in many ways supplanted face-to-face conversations. In a 2015 poll by the Gravitate Research Group, 80% of Americans said they prefer texting to voice calls, and the average American spends 26 minutes texting every day.

So texting compatibility can be an important signifier of how communication would work in a long-term relationship. A 24-year-old friend and medical student living in Chicago, Madeleine Boesche, says texting issues convinced her to break things off with an older man she was seeing.

“He was usually very prompt in his replies, but the way he phrased his messages was always stilted, dry and emotionless,” she says. “When we would hang out he was funny and charismatic and a great conversationalist. But anytime I made a joke over text he would respond seriously, killing the witty banter vibe and ending the conversation.”

Lara Levin, a 27-year-old living in San Francisco, says she met a man on the dating app Hinge and saw him for over two months before deciding their texting habits were incompatible. “We went on a couple of great dates, but he wouldn’t respond to texts for over 24 or 26 hours, and when he did, he was just a horrible communicator,” she explains. She said that any potential partner must be able to maintain witty banter as well as respond in a timely manner “so as not to induce panic on the recipient’s end.”

The texting delay led Levin to end things with the man. “He told me that I sounded, ‘kind of insane,’ to which I responded that I know myself well enough to know when something won’t work,” she says.

The ever-frustrating text delay has even impacted the likes of Aziz Ansari. In his book Modern Romance, the comedian tells of a time a woman he had recently seen was slow to respond to texts, leading Ansari to wonder whether he had done something to turn her off or even whether she had died.

MORE: Aziz Ansari: Everything You Thought You Knew About Love Is Wrong

In all these cases, one person thought the other was violating what they perceived to be best texting practices. Though not everyone agrees on what those guidelines are, people feel strongly that their view is the right one.

“In texting, the concept of rules is strong, much stronger, I think, than the rules we do or don’t adhere to in actual in-person encounters,” lifestyle writer and friend, Raisa Bruner, says. The most stringent rule: play hard to get. If it takes him 20 minutes to respond, you wait 40. Don’t text after 10 p.m. And never, ever double text.

Though these rules apply to both genders, outdated mores still tend to guide them. Loquacious women are pressured to limit their responses. “Women are still subjected to the implicit assumption that we will be ‘clingy’ and ‘needy,’ and in order to project ‘chillness’ it’s necessary to curb our own propensity for chattiness,” says Bruner. “But it’s unfair to men too. As a woman talking to men on dating apps, if the pickup lines are uninspired, the emoji game is weak or the conversation doesn’t break any new ground, I’ll stop responding immediately. Text chemistry is no guarantee of in-person chemistry, but it’s the only indicator we have.”

And sometimes a poor indicator. That’s what a 24-year-old friend I’ll call Jane found after falling for a guy she met on dating app Coffee Meets Bagel after weeks of messaging. “As we texted, I was becoming more and more convinced that we were truly compatible. We liked the same movies, books, television shows, music. In fact, we were reading the same book at the time, and he just consistently made me laugh and smile a lot,” she says.

But when they met in real life, things fell flat. “I am more extroverted and emotional. He is more reserved and judicious. We communicated very effectively, but there was never an in-person spark,” she says. “I actually think the reason we dated for as long as we did was that I was hoping he’d become the guy I fell for via text.”

The transition from texting to reality can be tricky. “We focus on texting as part of the seduction. It’s game theory, figuring out how best to intrigue the other person,” says Sherry Turkle, whose book Reclaiming Conversation: The Power of Talk in the Digital Age advocates for a return to face-to-face communication. “The danger is you extend ‘the game’ into the relationship, and that game becomes normalized. It’s very hard for single people to know when they’ve gotten out of that ‘game’ stage.”

MORE: How to Find Love Online, According to the Founder of OKCupid

In her book, Turkle writes about a man she met who thinks the time he takes to carefully structure text responses makes him a better person, communicator and mate. Predictably, his relationship falls apart when he’s confronted with in-person conversations that demand equally thoughtful, emotional or witty responses as those he would take 10 minutes to craft over text message, but which he cannot replicate in the split seconds of live conversation.

Or they don’t. One New York couple I know that’s been dating for four years limits their texts strictly to logistics. Every real conversation happens face-to-face. “It often weirds people out that we just aren’t in contact that much, but we have a mutual inability to text-converse,” the woman says of her significant other.

And it’s kind of magical when it happens: finding someone who understands the way you communicate, whether it be in person or over text. Like the Prince finally matching Cinderella to her glass slipper—except the glass slipper is an emoji, and the Prince and Cinderella haven’t actually ever seen each other, just profile pictures of each other. 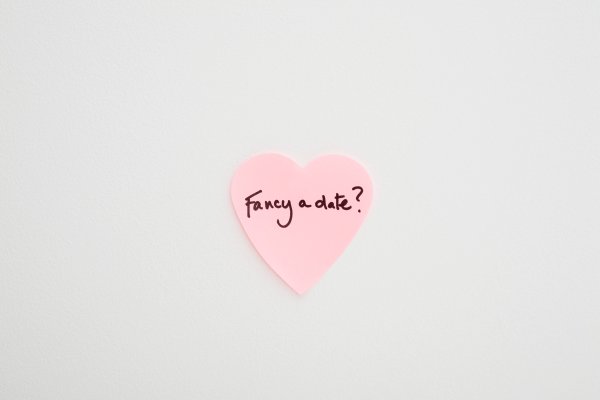 Is This a Date? Take Our Quiz to Find Out
Next Up: Editor's Pick