Scientists have confirmed Einstein’s theory of gravitational waves more than a century after the concept was first proposed, a dramatic discovery that could change the practice of astronomy, researchers announced Thursday.

In September, laser facilities in Washington state and Louisiana both recorded the same distortion in space—measured as a short audible chirp—coinciding with the collision of two black holes a billion light years away. The finding suggests that energy from any movement travels across space and time in waves, leaving slight distortions across anything in its path.

The project, funded by the National Science Foundation at the cost of more than $1 billion, has been decades in the making as more than a 1,000 scientists worked on a collaboration known as LIGO, short for the Laser Interferometer Gravitational-wave Observatory. The two U.S. facilities each have two L-shaped vacuum chamber tubes measuring 4 km (2.5 miles) containing lasers and mirrors. Scientists who designed the devices hoped that the elaborate construction could detect a change in the length of the tube caused by gravitational waves.

That’s exactly what happened in September when two black holes—one the size of 36 suns and the other the size of 29—collided a billion lightyears away. And even that only registered as a tiny chirp.

“We have detected gravitational waves,” said David Reitze, LIGO executive director, at a press conference Thursday. “We did it!”

The discovery also opens the doors to a new era of astronomy research using the measurement of waves. Some scientists suggested the discovery could allow researchers to study what happened during the Big Bang nearly 14 billion years ago, as waves from that moment still travel across space and time.

“It’s been a very long road but this is just the beginning,” said LIGO spokesperson Gabriela González at a press conference Thursday. “Now that we know binary black holes are out there, we’ll begin listening to the universe.” 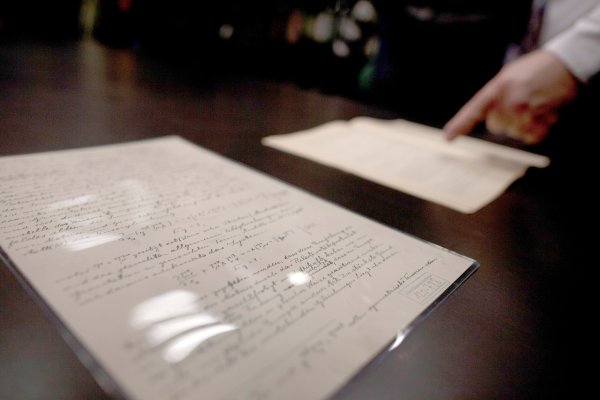 The Discovery of Gravitational Waves Is a Whole New Chapter for Science
Next Up: Editor's Pick