Until I lived with my wife, I had no idea other people’s brains worked differently from mine. And by differently, I mean worse. Many people, for instance, don’t like to read with music blaring. Or be interrupted over and over again by the world’s funniest jokes. Because of their inferior brains.

So when Sonos asked us to be one of 31 families participating in a study to see if music brings people closer together, I feared I would throw off their results. However, I cared far less about science than about trying Sonos’ amazing wireless speakers, each of which can play its own music that you choose from an app. They’re one of the things you’re required to have as a rich person now, along with a Tesla, an Apple Watch and parents who were rich.

Sonos had conducted a survey that found families that played music in their house spent more time together, ate dinner together more often, had twice as much sex and—because, I’m assuming, the polling company made Sonos come up with one more question—had more dance parties. The most surprising finding was that 7% of people who do not play music at home have dance parties there anyway, which is either a testament to the human spirit or a warning to stay away from 7% of people.

One could argue that the kind of people who play music are also the kind of people who dance, eat together and have sex. In other words: South Americans. So Sonos decided to conduct an experiment. For one week, we were not allowed to play music out loud in the house; the following week, we’d set up the speakers and dance-party all night. Our behavior was tracked through an app Sonos built, our biometrics were measured on Apple Watches, our movements by iBeacons on our ceilings and our feelings through therapy sessions with Daniel Levitin, a neuroscientist who wrote the best-selling book This Is Your Brain on Music, contributed jokes to Jay Leno, engineered Grateful Dead albums, jammed on saxophone with Sting, played himself on The Big Bang Theory and worked with me at the Stanford newspaper. Most of our session involved me wondering why I hadn’t accomplished more since college.

My lovely wife Cassandra told Levitin that she was excited for the silent week, since I played music too loud and all of it was uncool. Levitin asked her if I’d always had crappy taste in music or if I tricked her during our courtship. This was the kind of bit I thought he should save for Leno. But Cassandra said, “When you’re young and fall in love you overlook those things. After time it starts to wear on you.” I had the feeling we were no longer talking about music.

When we talked to Levitin at the end of the week with music, however, she was very pleased, since she could change my music right on her phone. When he asked if we had more sex, she reported that we hadn’t, but then had sex with me that night. Far more powerful than music is having your love life questioned by a guy who has been on The Big Bang Theory.

Sonos’ study showed that during the week when the music was on, families spent 13% more time together and were 12% closer when they were in the same room. The fourth most popular song people played was “Sex Dwarf” by Soft Cell. This made Cassandra’s and my accomplishment seem pretty lame.

Even worse, our family somehow spent 51% less time together when we played music. When I delved into the data, the reason became clear: Cassandra and my son stopped wearing their Apple Watches and carrying their iPhones despite my pleas. When I asked Levitin how I could use music to get my family in line, perhaps the way the U.S. military did on Manuel Noriega, he said, “It’s a healthy thing that even Laszlo at 6 is scoping out his own identity, as is your wife. Just because it’s good for your career doesn’t mean it’s good for theirs.” This would make sense if either one of them had a career.

Still, the data we did gather showed that when we were wearing our watches, we were 5% closer during the music week. Based on other research he’s done, Levitin thinks this is due to the fact that sad music releases prolactin, which is a bonding hormone, and all music releases oxytocin, which is a hormone released during orgasm. “It effectively tricks the man into sticking around because he feels bonded to a woman,” Levitin said. I told him not to tell his wife that or all the “Sex Dwarf” in the world wouldn’t help him.

This is the worst-paying column I’ve ever written, since I’m buying all eight speakers Sonos lent me. Because I’m pretty sure we now spend more time eating, doing dishes, dancing and not talking about how my taste in music sucks. I’m going to need all those ways to be happier now that I realize I have no ability to get them to listen to me. 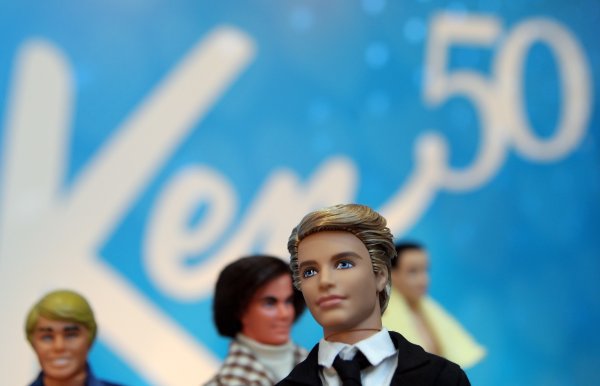 Ken Speaks: 'I Will Always Love Barbie, No Matter Her Size'
Next Up: Editor's Pick