On the day before the New Hampshire primary, Jeb Bush addressed a Rotary meeting at the Nashua Country Club. It was the sort of event that has, for the past 100 years, defined the Republican Party, just as union-hall rallies define Democrats. The Rotarians have always represented a peak of American bourgeois civility, and these Nashua businesspeople had listed some rules of discourse on a banner. The first two were: Is it the truth? and Is it fair to all concerned? Bush was perfect for this Norman Rockwell setting, speaking about his accomplishments as governor of Florida and his current travails as a candidate: he was tired of politicians who “push down a group of people to make themselves look better.” That could have been one of the rules on the banner. He said that he had a trove of position papers but that they weren’t “resonating” because the coin of the campaign was insult. He said that if elected, he would be a “leader with a servant’s heart,” a lovely phrase.

A day earlier, I’d watched John Kasich make the same point in a more off-the-cuff way. He talked about how he’d had to listen to average people on the campaign trail, who told stories about their hardships and victories. And he had taken a lesson from it: “Slow down,” he said. “You’ve got to slow down … Heal the divisions in our families, be willing to listen to the people next door … give ’em a hug.” He would return to the theme in his victory speech–he finished second, a hollow victory–after the New Hampshire primary.

Bush and Kasich had found their way to a poignant and crucial, if counterintuitive, theme amid the rampant boorishness of this campaign. Speaking to the Rotary, Bush was paying homage to his father’s Republican Party and to a society in which businesspeople got together, talked about stuff, marched in parades and organized community-service projects. Ridiculed by a nation of hipsters, they’d been the glue in their communities; the glue has gone dry and is cracking now.

Kasich, who seems truly transformed by this campaign–in a good way–was also talking about the comforts of citizenship. He was suggesting that there was an antidote to all the free-range anger out there–lazy, uninformed, self-indulgent, media-induced anger–and it involved prying ourselves away from the flat-screens that rule our lives and becoming part of a community again.

This was immediately dismissed–it was called “chicken soup for the soul” politics–by too many of my colleagues. They pointed out that Bush was hanging on by his fingernails after a fourth-place finish, and Kasich was probably doomed in South Carolina and the rest of the red-meat South. In fact, Kasich has run a beautifully weird, unscripted campaign–talking about how to actually make government work, as he has as governor of Ohio, offering his flagrant humanity and refraining from negative ads. There was clearly no long-term place for that sort of thing in American politics.

Because Donald Trump, by God, was in the driver’s seat now. He had performed “better than expected” in New Hampshire, which meant the electorate had performed worse than expected. “I’m for Trump because he talks about Muslims the way we talk about Muslims,” one supporter said–and this, in my experience, was what Trump was all about: he was punking American civility. He said naughty stuff–and it was fun. “I know I shouldn’t feel this way,” a female voter told me. “I know I shouldn’t vote for him, but he’s entertaining and he’s saying the things no one else says.”

As usual, the TV folks couldn’t be bothered by the sheer amorality of the phenomenon: Trump had “won the day.” He now had a luminous path toward the nomination. Indeed, the Donald couldn’t have been happier than with the hand he was dealt leaving New Hampshire–his biggest threat, Marco Rubio, had been nailed in a historic debate kamikaze mission by Chris Christie, nailed in a way that illuminated Rubio’s greatest flaw: his cosmetic fluency. Ted Cruz was still out there, but he was diminished.

Bad taste and flagrant bigotry had been rewarded. And lessons had been learned by a generation of future candidates: if you want to get ahead, be outrageous, slag the weak and the different. You’ll get a lot of airtime.

When I think about this particular New Hampshire, though, I will remember the thwarted substance of Bush and the inconvenient, uncool civility of Kasich. I may not hug my neighbors tomorrow, but I’ll certainly listen to them more closely. 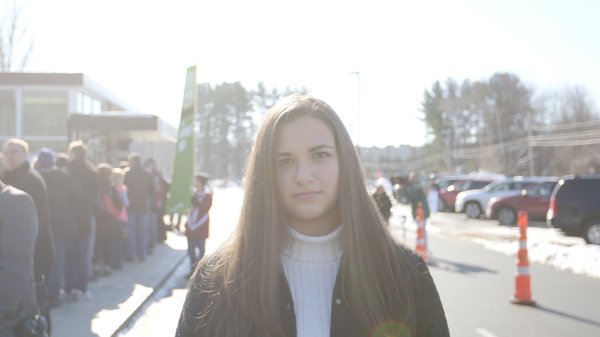 Watch Young Republicans Talk About the 2016 Candidates
Next Up: Editor's Pick