When Vermont Senator Bernie Sanders took the stage in New Hampshire on Tuesday night to deliver his victory speech, he asked for campaign contributions in his own way: a cheeky taunt paired with a brazen ask.

“I am going to New York City tonight. But I am not going to New York City to hold a fundraiser on Wall Street,” Sanders told the audience, poking broadly at his opponent Hillary Clinton’s high-dollar approach to raising cash. “Instead, I’m going to hold a fundraiser right here, right now, across America.” The Vermont Senator then directed his listeners to BernieSanders.com and asked for a contribution.

What followed was an online fundraising bonanza that brought in $5.2 million in 18 hours — which would have been nearly enough to pay wages for Sanders’ entire campaign staff in 2015. The sum beat his previous record after narrowly losing the Iowa caucuses of $3 million, his campaign said.

Sanders’ haul in the hours since he won in New Hampshire speaks to the success of his fundraising operation. He has relied almost exclusively on small-dollar contributions from donors who can give repeatedly without maxing out. His campaign has received 3.7 million contributions from some 1.3 million individual contributors. And his average contribution is $27, a number he repeats on the campaign trail so often that it was parodied on a recent episode of Saturday Night Live.

A large war chest will not necessarily lead to victory at the polls: Jeb Bush spent nearly $3,000 for each vote he won in Iowa, and he came away with a dismal performance in the state.

Clinton, too has raised heavily from small donors, especially compared with her previous race in 2008, bringing in cash from close to 700,000 individual contributions.

But she has relied heavily on high-dollar fundraisers. Of the $114 million Clinton raised last year, 58% of it came from donors giving the maximum $2,700 donation, according to the Campaign Finance Institute. Her total outpaced the $74.9 million Sanders raised last year, but there are limits to how much Clinton can raise to do closed-door fundraisers while she is busy campaigning. She brought in $15 million in January, compared with Sanders’ $20 million.

Sanders will need the extra money. His staff is growing his campaign organization and spending money on advertising in Nevada and South Carolina, as well as March states of Colorado, Minnesota and Oklahoma beginning this week, senior strategist Tad Devine said. Clinton has much of the infrastructure in place to begin efforts in those states.

Sanders’ fundraising success on Tuesday night did not stop him from asking for more. On Wednesday afternoon, his campaign sent out yet another fundraising email, saying that the $5.2 million he raised in the last hours would “send shivers down the spines of the nation’s financial elite and political establishment.”

Whether the Establishment is worried or not, Sanders’ haul after the New Hampshire polls closed is part of what explains why his campaign is built to last, no matter how many states he loses. 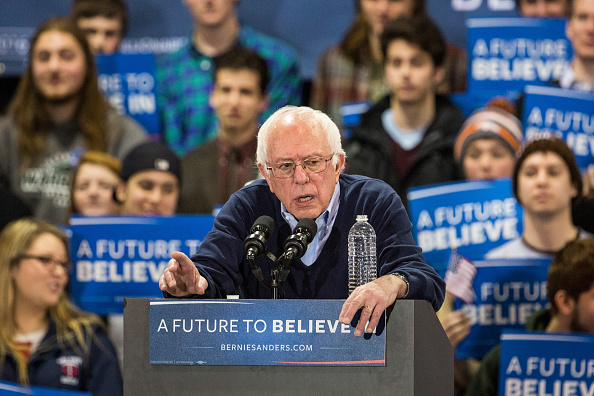