The War Over the Pentagon Budget

Budget games have preoccupied the Pentagon almost as long as war games, and this week’s release of President Obama’s final defense spending plan, for 2017, is no different. Depending on who you’re listening to this week, the U.S. military budget has been gutted, or adequate.

But you have to consider the sources: lawmakers who think the military needs to be bigger and spend more in a dangerous world blame Obama for what they see as an emaciated military not up to the missions the nation needs it to carry out (the fact that any President’s budget is merely a proposal, and that those same lawmakers actually appropriate the funds to be spent, seems to escape congressional critics).

At the Pentagon, the generals in charge of the nation’s military remain confident of their forces’ ability to tend to the nation’s deterring and, if necessary, fighting.

Obama’s proposed 2017 budget (covering the fiscal year, which begins Oct. 1, 2016) is $583 billion, a tiny 0.4% hike over what the Pentagon is spending this year, but more than it spent during the average Cold War year. That was when the U.S. faced an existential threat from the Soviet Union. Somewhat surprisingly, that made for a simpler, and apparently cheaper, world, militarily speaking.

"OCO" is additional spending for "overseas contingency operations" like the wars in Afghanistan and Iraq.
CSIS

The Pentagon’s biggest cost drivers are the price of maintaining a professional military—no cheap draftees—and the skyrocketing cost of their health care and the weapons they need. As those rise, the total number of troops, and their weapons, have to shrink given a limited amount of money for the military. Surely, Obama could request, and the Congress could approve, more money, but they boxed themselves in when they passed the Budget Control Act of 2011 that greatly restricted its ability to do so.

Unfortunately, they didn’t pass a companion Rhetoric Control Act. The notion that the military has been eviscerated has become a popular refrain, in some congressional quarters and on the campaign trail. “The gutting of our military is not an accident,” GOP presidential candidate and Florida Sen. Marco Rubio declared during Sunday night’s debate. “We’ve been gutting the military budget,” added ex-Florida Gov. Jeb Bush.

Tuesday’s budget rollout only turned on the afterburners. Sen. Tom Cotton said Obama’s budget is “ignorant and hypocritical,” because the President has declared the U.S. military the world’s best while simultaneously under-funding it. “We were our enemies’ worst nightmare and our allies’ favorite friend,” said the Arkansas Republican, who served as an Army officer in combat in Afghanistan and Iraq. “Unfortunately, President Obama’s policies have made that no longer the case.”

Sen. John McCain, chairman of the armed services committee and a Navy pilot held as a POW by North Vietnam for more than five years, agrees. “It is already clear that this request is inadequate to address the national security threats we face and the growing demands they impose on our men and women in uniform,” the Arizona Republican said. “Rather than request an increase in defense spending that reflects what our military really needs, the President’s request attempts to pay for these increased costs by shorting other important defense needs—cutting 15,000 current Army soldiers and 4,000 sailors, reducing major modernization programs, and proposing a pay increase for service members much lower than what is needed to compete with private sector wages.”

One might expect such ire to be echoed just across the Potomac River from the Capitol, in the Pentagon. And there is a fair amount of private grumbling about the budget vise, and Congress’ inability to provide the Defense Department with the stable, predictable budgets needed for smart planning. But significantly, no general or admiral has tossed his or her stars atop the commander-in-chief’s Resolute desk inside the Oval Office because he or she believed Obama and the Congress are starving the military.

“I won’t be argumentative, but I will take umbrage with the notion that our military has been gutted,” General Paul Selva, the vice chairman of the Joint Chiefs of Staff, in defending the 2017 budget request. “I stand here today a person that’s worn this uniform for 35 years. At no time in my career have I been more confident than this instant in saying we have the most powerful military on the face of the planet.”

He acknowledged challenges, but made how he and his colleagues have grappled with them: “You have to make choices on where you focus your energy”—and dollars. This is nothing new. The nation’s military has never been able to address all the threats it faces with 100% certainty of prevailing. It’s the job of military professionals to calibrate the amount of risk worth accepting.

To be sure, after nearly eight years in office, Obama and his civilian Pentagon appointees have been responsible for promoting all of the military’s top officers to their current jobs (subject to confirmation by the Senate). Congressional critics will say privately that the Administration has only tapped those officers who agree with their worldview (it’s also called “civilian control of the military”).

But Selva, the nation’s No. 2 military officer, promised McCain at the general’s July confirmation hearing that he wouldn’t hesitate to speak up if he felt the Administration was placing the nation at risk.

“Do you agree, when asked to give your personal views, even if those views differ from the Administration in power?” McCain asked Selva.

It’s tough for lawmakers to convince the public that the military is being gutted when the generals don’t agree. But, as the presidential campaign shows, that won’t stop them from trying. 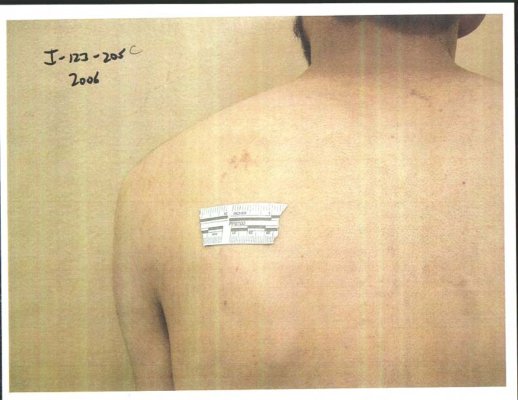 The Photos Linked to Detainee Abuse Released By U.S. Military
Next Up: Editor's Pick