This Teen's Promposal Went Viral For All The Right Reasons

What Ben Davis thought would be just another pep rally ended in a surprise that brought the 16-year-old to tears.

On Friday, Davis was wheeled out to the middle of Everett High School’s basketball court and treated to an extraordinary promposal in front of his entire Lansing, Michigan, school. A video of the priceless moment has been viewed more than 3 million times on Facebook.

“I met Ben Davis two years ago and ever since then we became really good friends,” Vee Nguyen, the mastermind behind the promposal, wrote on Facebook. “He is such a sweet person with a kind heart and it’s an honor being able to ask him to prom!”

Davis has a rare condition called Pantothenate Kinase-Associated Neurodegeneration (PKAN), a genetic mutation that damages nerve cells in the brain and causes iron build-up, the Detroit Free Press reports. When he was called to center court, students brought out a box that read, “I’ll ask you to prom when pigs fly.” The box was then cut open to release pink, pig-shaped balloons.

Davis then turned around to see his friend Nguyen standing with a row of students wearing shirts that spelled out, “PROM?” The surprise brought the teenage boy to tears. He handed Nguyen a red rose and the two friends hugged as the students gathered in the stands cheered.

Nguyen told the Detroit Free Press that she and Davis became friends in 2014 while she was working with a school program that supports students with special needs.

“I started talking to Ben and seeing him every day. I would eat lunch with him and we would have short conversations since it’s hard for him to speak,” she said.

She added that she felt it was important to make the promposal in front of her school in the hopes that it would inspire other students.

“I thought doing it at the pep rally where there are a lot of students would be a great idea to spread the message and to let others know that no one should be treated any different,” she said.

She never would have guessed that her sweet surprise would end up reaching and inspiring millions. She hopes they’ll take her message of inclusion to heart.

“Appearance will eventually get old, but personality is what make a person beautiful,” she said. “And if everyone could look past the physical appearance every time they meet someone, this world would be a better place.” 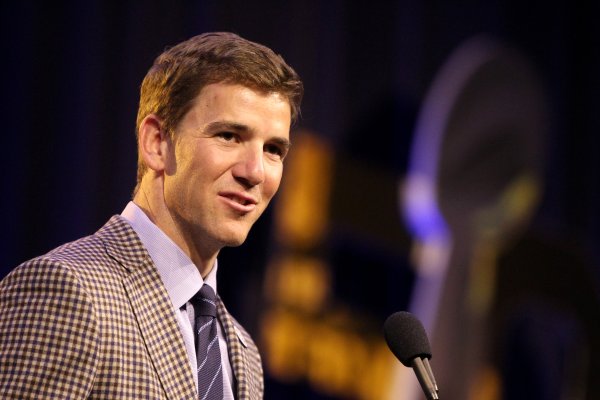 Eli Manning Explains His Sad Face at the Super Bowl
Next Up: Editor's Pick