Superhero movies might be Hollywood’s bread and butter these days, but Deadpool’s debut as a big-screen leading man was as much of an uphill battle as they come in Hollywood. It’s been 11 years since Ryan Reynolds set out to build a movie about the Marvel antihero, and more than six since Rhett Reese and Paul Wernick signed on as scribes. Now, the irreverent origin story of the “merc with a mouth” (out Feb. 12) is poised to dominate the Valentine’s Day weekend box office (because what’s more romantic than dutch oven jokes?), with reports that a sequel is already in the works.

Reese and Wernick, friends since high school and writing partners for more than a decade, faced several challenges in adapting a beloved character from comic book to silver screen. First, there was the delicate balance of pleasing hardcore fans while appealing to audiences not steeped in the Marvel Cinematic Universe. And second, there was the undeniable risk of investing in Deadpool’s off-color, R-rated personality in a box-office landscape in which more family-friendly superhero movies have proven their success many times over.

Now, after a leaked script, an abandoned PG-13 version and the constraints of a budget which Wernick says Reynolds has compared to “the laser hair removal budget for most other superhero movies,” Deadpool has finally arrived. Reese and Wernick spoke to TIME about the raunchiest of their many raunchy lines, their approach to inside jokes and what Deadpool has in common with Donald Trump.

TIME: Were you guys fans of Deadpool before you became attached to the project?

Wernick: We’re superhero fans and big comic book fans. Deadpool passed us by in the sense that we were no longer kids when it came out, so we got acquainted with Deadpool a little bit later on in the process and read all the runs and just fell in love with the character just as all the fans had early in the ‘90s.

How did you balance satisfying the diehard fans with trying to make the movie accessible to the non-superhero crowd?

Reese: Where we generally fell was, let’s make this story relatable to everybody. Let’s make this love story and this revenge story simple, clean and really heartfelt. And then the comedy—we can do everything from a reference to Ronnie Milsap, who was a country singer from the ‘70s and ‘80s that no kid would know today, to much more current stuff about James McAvoy and Patrick Stewart and the X-Men timeline. We didn’t worry about whether any particular joke would go over somebody’s head. We just tried to write a bunch of different kinds of things and hope that if people laugh at seven out of ten of them, that’s great, and if a different person’s laughing at a different seven, that’s great, too.

The opening credits—which, instead of calling out the director or producers by name, read, “produced by asshats” and “directed by an overpaid tool”—are a great example of how self-aware the movie is, mocking the traditional superhero flick even as it is a superhero movie.

Wernick: The opening credits really just set the tone for the movie. It grips the audience by the throat and says, “Buckle up guys, this is not your father’s superhero movie.” It was just a fun way to energize the audience and to tell them everything they expect in a superhero movie, they can throw out, because we’re about to turn the genre on its head.

How much leeway were you given to stray from the original comics?

Reese: We were given a ton of leeway, but we kind of self-censored and were careful to hit all the major points about Deadpool. We weren’t going to put him in a blue suit, you know what I mean? There were certain tentpole characteristics of his that we had to hit. Ryan Reynolds was very much the keeper of the Deadpool flame. He’d been a fan of the comics for a long time, so he was protective of them, and rightly so. In the grand scheme we made it our own without violating those particular principles.

Did you get any input from any of the comic book writers or people involved with earlier iterations of the character?

Wernick: When you’re adapting a comic book, the key is to pick up those comics, read them intensely, get the feel of them—the texture, the tone, the character—and then just set them aside and come up with your own story. Anytime you’re adapting anything, you’re hired as the writer to bring your own take to the material. We’re not mimics, so our job isn’t to transcribe what was in the comic and put it on screen. Rob Liefeld, who’s one of the creators of Deadpool, gave us the ultimate compliment when he said, “There’s been 25 years of Deadpool comics and this is really the seminal Deadpool story. This will be remembered as his creation.”

The movie switched a few times from R to PG-13 and back to R. How did the raunch factor ebb and flow over the past six years?

Wernick: Ryan gave us the direction of, let’s write the script we want to write. Let’s really capture the heart and tone of the comic, let’s go balls out, let’s be the outlier. There’s all these PG-13 superhero movies; we can be the apple among the oranges. So we wrote a crazy script with lines like, “It’s a face I’d be happy to sit on.” It’s a line Rhett wrote and I read it and just went crazy. When I read it, I thought, oh my God, this is brilliant. And then I thought, oh my God, Fox is never, ever going to let us make this movie.

In terms of raunch, it’s been dialed up, dialed back. We’re a little bit unapologetic in how raunchy it is, because you shouldn’t bring your 6-year-old to see this movie. Unless you’re a very irresponsible parent.

Fabian Nicieza, one of the creators of Deadpool, said in an interview that Deadpool “is like a walking enema for foul thoughts.” It kind of brings to mind Donald Trump—I’m half-kidding but half-serious here—because a big part of many people’s attraction to Trump, like Deadpool, is that he seems to say whatever crosses his mind.

Wernick: That’s interesting, because Deadpool really doesn’t have a filter between his brain and his mouth. It can be offensive but it’s refreshing. You get what you get.

Reese: That said, I wouldn’t vote for Deadpool for president. 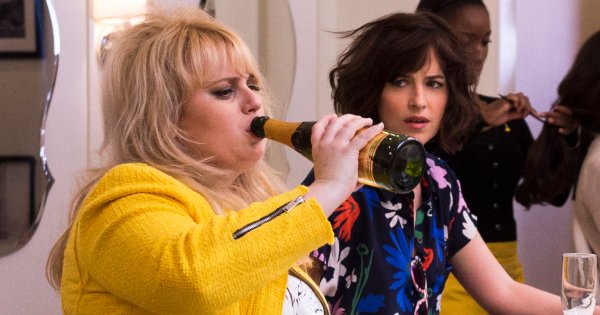 15 Movies for People Who Hate Valentine’s Day
Next Up: Editor's Pick